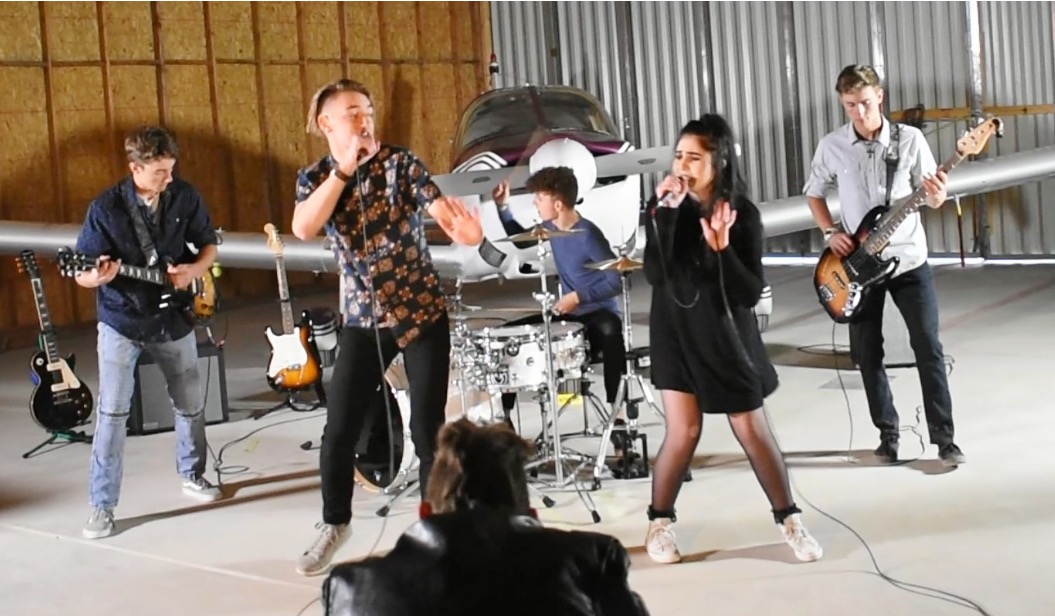 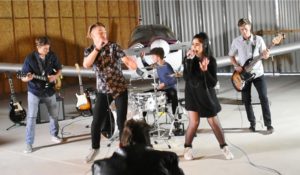 Nevada based indie artists Tower Of Cards are releasing their debut album on July 14th entitled Waiting on a Miracle. Louder Than War’s Eileen Shapiro catches up with them.

The miraculous facet of this band is that they are all still in High School, are all 17 except the bass player who is 16, and they have already performed in the famous House of Blues in Las Vegas.

The band originated  in Middle School for a talent show and went on to win a contest with 4,000 other contestants. The members include: Garrett Lucas on guitar, brother Willie Lucas playing the bass, Adrian Grimaud, the lead male vocalist, Brooklyn Thomassian, the lead female vocalist, and the drummer, Ryan Olde.

Adrian and Brooklyn have voices like angels, and the rest of the faction is tight. The album is filled with high powered energy, moving ballads and aggressive harmony. I spoke to the band about their road to success and future hopes for tomorrow.

Louder Than War: How did your band begin?

Ryan: This was my idea. I put the band together at the end of Middle School, so in 8th grade we started.

Adrian: He put us altogether for a middle school talent show where we played one or two songs.Brooklyn actually wasn’t in the band at that time but she hopped in after a year or so. Ryan was also friends with Garrett at that time and we knew he could play guitar pretty well, and we all got together and played this middle school thing. We thought we all sounded good at the time, but looking back …..I guess it’s good that we thought we sounded good because we kept going on with it. So here we are today releasing our first album together.

Willie: Waiting on a Miracle.

Do you play live?

Garrett: We do. We’ve actually played House of Blues in Las Vegas three times. The first time we played there we actually entered into a contest. Out of 4000 bands, they chose six bands and we were one of them. Then we got to play on that stage. I guess they liked our music and our style, so they keep inviting us back.

Did you win the contest?

Garrett: Yes we did actually.

Do you do more covers or originals when you perform?

Adrian: Well when we first started we only did covers. We played at the fall festival at our town and we played like 12 covers. Eventually we got the skill of playing together and we wrote  a bunch of songs. The first couple of songs we decided to scratch for the final album. We just thought we weren’t mature enough in our songs. After a lot of writing together and a lot of finding ourselves we finally put together this album, and we’re pretty proud of it.

Tell me a little bit about the album.

Adrian: The album is a full album, with 12 songs. We have a really cool cover. We are broke down on the side of the road and we’re waiting for someone to pick us up so therefore the title, Waiting on a Miracle. It’s titled after one of the songs on the album. The album has two different feelings. There is  kind of a darker side, and kind of a happy fun side that we like. Our single, “Happily Ever After”, and the music video was kind of showing off more of the happy side. The next single that’s coming out will reach more of the darker side to the album.

If you could say anything to your supporters what would you want them to know?

Garrett:  I think what I’d want to tell them is that I hope that they got something from our music that they didn’t have before, like a lesson, or something that would teach them something.

Are you planning a tour to support the album?

Adrian: We are planning on a summer tour for next year. We have these festivals that we are trying to contact and put together. We’ve never really done a tour before, so this is kind of new to us. So we’re hoping for the best and we will have this tour set up by next year.

Brooklyn, this question is for you, what’s it like playing in a band with all of these boys?

Brooklyn: Well, it’s defiantly a little bit different. It took some getting use to especially since I grew up in a family of all girls and only two boys. But, they are all like my family now.

Do you guys fight?

Garrett: Actually, the worst fight we ever had we were preparing for one of our shows. It was a few days before the show and we were all talking about it, and after my mom said be quiet and I was still talking, then Ryan threw a drumstick at me. It landed in my eye. I was mad the rest of the day. We still joke about it until this day.

What’s your best experience together as a band?

Garrett: We are all great Friends aside from band life. We’ve done so many things together from going to the beach in California, and movie nights, but out of all of our memories together making the music video was probably our best experience. Ryan running behind the plane while it took off was hilarious and gave us all a few good laughs. The people that helped us with the video were great to be around and we had a blast working with them it was unforgettable.

Where can one purchase the album?

Garrett: It’s in pre sale at Amazon and ITunes