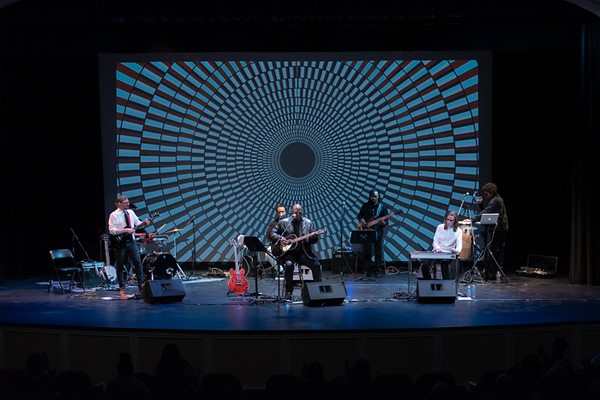 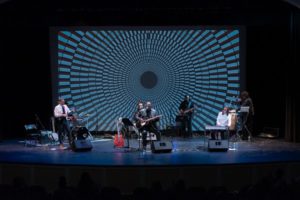 There are many illuminating facets to powerful singer/songwriter, record producer, record label President, and most recently, Broadway stage sensation, Tomás Doncker. Like an array of fireworks, Doncker is wild, plunging into the night sky and shattering the darkness with each performance. Although fireworks do not last forever, their memories of patterns, colors, brilliance, and surprise are lasting, as is the music created by Tomás Doncker.

Doncker is the CEO of the fastest rising record label in New York City entitled, True Groove Records. One of the world’s best guitarists, Doncker began his career with acts including James Chance & The Contortions, J. Walter Negro & The Loose Jointz, to name a few. He then toured the world and Japan with Japanese jazz musicians Sado Watanabe and Masabumi Kikuchi. Later he produced studio and songwriting sessions with Bootsy Collins and Yoko Ono. He has worked with artists including Madonna, Ivan Neville, Bonnie Raitt and Corey Glover, former member of Parliament Funkadelic. Currently Doncker is a cast member of the award winning play To Kill A Mockingbird at the Schubert Theater on Broadway.

Most recently he has just released his newest album The Black Magnolia Project in collaboration with Pulitzer Prize winning New York poet Yusef Komunyakaa. Accompanied by The True Groove All-Stars, a diverse, eclectic band, the album is a non-linear Future Roots Music of that place where sound, spirit and survival coexist and often collide.

I had an intimate conversation with Tomás regarding The Black Magnolia Project, a record that has no answers or questions, but instead is a beautiful reminder of the power of collaboration, a friendship of the human spirit, even in the darkest of times. He also spoke of collaborator and poet Yusef Komunyakaa, a god like visionary who transcends the human soul.

The Black Magnolia Project is a very inspirational creation, so I was wondering what inspired it?

I’ve had the honour of being associated with Yusef Komunyakaa for something like 17 years. We’ve done a bunch of different projects; not just the albums we’ve recorded together but other stuff that I’ve done that he’s participated in. This man is without question one of the greatest literary minds of any generation. We started working on this project just after David Bowie had died – I was a big fan of David Bowie. Without giving away too many state secrets of how it was created, we decided to take a collection of poems he had called The Blue Hour; the time just before dusk is often referred to as the blue hour, which takes place after the golden hour and this last mysterious bit of light. The metaphor or idea was that our spiritual selves are perhaps released into the atmosphere when our bodies are at rest, as in a state of sleep. What do souls do when we’re sleeping? Since spirits don’t need sleep perhaps it’s a good time for them to go out and do magical things. So perhaps the greatest achievements actually happen when we are asleep.

No one knows what happens when we go to sleep. I am a believer that time does not stop, something is always happening; we are always connected in someway or another whether we know it or not. That’s the basic gist of the collection of poems. We decided to jumble up the order of the poems to make them non-sequential. It wound up being a non-linear narrative. Each song could be about something but it’s not told from an ABCD in terms of the way the narrative of each song is lined up – it’s very topsy-turvy and very inside out-ish. During the journey of this seemingly randomly put together groups of lyrics I had to find a way to believe in what I was reading. I had to see what I was singing and completely invest in what was coming out of my mouth. Even when we went to the studio the band related to what I was singing.

Yes exactly, we have a great chemistry as a group. But ultimately it all came down to trust – it was trust in the chemistry that we all have. No matter how anyone reacted musically it was going to be appropriate. The whole thing started from a very vague, murky place, we all knew we were going to invest in a journey to the unknown. Like I said the foundation of it was trust: more often than not in this process something magical happens, something beyond any of our collective imaginations. You talk about it being a spiritual and inspirational album and I believe that’s because we went into this with no agenda. It was just for the sheer joy of creation.

What do you feel is in it for the people and fans who will be listening to it, or seeing you perform it, as far as a message or a magic?

This is the cool thing about the experimental nature of this record, the response to the songs are always different. Everybody has a different take on every song, what it means to them; that’s a beautiful thing. Everybody feels something. To me as an artist it doesn’t matter what you feel as long as you’re moved. If you are moved I’ve done my job. So much content dictates to the audience what they should feel nowadays – that is not where I came from. I feel the kind of stuff that you can have your own feelings and an opinion about is the kind of stuff that you listen to over and over again. I think that’s because you feel invested and you don’t feel like you’re being dictated to. Anyone that listens to this record will come away with their own feelings unique to them. This is definitely a music for people to listen to; those who do listen come away with very elevated and emotional experiences which is the joy of listening to music. Listening to music requires an investment. You have to sit there and listen and open your ears and let the music affect you. With this particular album we really tried our best not to dictate what should be felt. We went into this whole thing, it was open ended and we just want to see what happened – it’s communal. It’s was a communal experience from the beginning; from the creation of it, it was a communal experience, and when people listen to it they feel they are a part of that. It’s a very tough time we live in with the world there is so much being dictated to us – through media and social media we are constantly being told how to feel.

So your point of view regarding this album is people are allowed to feel whatever it is that they want to feel?

Exactly. It’s completely open to interpretation. I think it’s a breath of fresh air to hear something and not immediately be jolted into it – just to let this music wash over you.

How would you describe Josef’s involvement in the collaboration? I mean, as far as I know he’s not a musician?

He’s not a musician but he’s the most musical person I know. He is definitely the most spiritual person I know. This whole project doesn’t happen without him being involved; the starting place were his words, there is magic in his words. In a lot of ways there was no way we could fail. The man is a wizard with words. Songs are written and then you go into the studio; then you perform them, then you go from there. A song, if it’s a good song, has a life of its own. I once asked him when we did the album The Mess We Made “How do you do this?” How do you put words on paper that move people?” I believe the proper term for it is alchemy. With music in general it’s the same thing – you have silence, then you have a series of notes, and then somebody starts moving. Someone starts dancing. Or someone starts crying, where before there was nothing. It’s quite a magical thing. I know I sound like pie in the sky but those are the things as human beings we need to keep us alive; the infinite place of wonderment, to get something to be beautiful when there was nothing before. He said to me, “Well man you know, in a perfect world the first thing you’ve got to have in order for something to happen is a willing and hopefully opened mind. Because you could take someone who isn’t willing to have an opened mind and it just doesn’t resonate – it;s just words on paper, it means nothing to them.” Then more importantly he just looked at me and said, “Just let the words to the work”. Then he winked at me and smiled.

For more information on To Kill A Mockingbird: https://www.broadway.com/shows/to-kill-mockingbird/

All words by Eileen Shapiro, you can find Eileen’s archive here