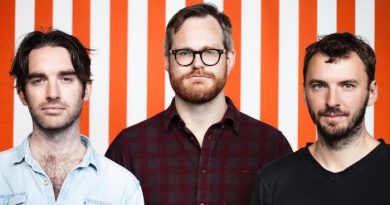 Following the release of their astounding second album Silent Earthling, Three Trapped Tigers have been out on tour around the UK. Louder Than War editor caught up with Matt Calvert for a quick Q&A.

Louder Than War: Five years since the debut – how do you all feel you’ve changed as people in those years, and how has your dynamic as a band changed? How do you feel this length of time between records has shaped your sound?

We’re still friends which helps! I read recently that the key to a good relationship is distance. We were all working on other musical projects which helps gives us the desire to come back to TTT with a lot of energy and ambition.

Often described as indescribable (!) what are the themes you think come through on this album, or that were influencing you during writing and recording?

We wanted to maintain our sound, but the main themes or ideas influencing me when writing for this record were groove and hooks. Most of the material from this record stems from drum parts I either programmed or dictated for Betts to learn and then adapt, with an emphasis on greater variety of tempos to our previous records.

In the past we’d been all about high octane, fast tempo stuff. That has survived onto this record, but we go into slower (not necessarily slow) tempos too. I then wrote most of the material above these beats.

Actually, if you listen to Cramm or Creepies from our last album, there was an emphasis on interesting grooves then too.

I think melodically it’s a bit simpler, more direct too. There was also a conscious effort to expand sonically in terms of different synth sounds and sonic details, which we can still recreate live.

Did you set out to not sound like anyone else or is it just the way it happened that your sound is unique?

We formed the band out of a shared love of Warp records, drill n bass, IDM – Squarepusher and Aphex – and thinking of how to imitate that with some live instruments. Obviously you will never recreate those inhuman drum beats, but through trying you can come up with something else. Add in guitar, it already sounds like something else.

I guess this process of taking inspiration from music that hasn’t always featured live drums or guitar has carried on beyond those early influences – on the new record it’s all sorts of other stuff.

Which band or artist that you’ve shared a bill with or collaborated with do you think has had the most influence on TTT sound or come closest to influencing your style?

We did some gigs with Fuck Buttons years ago. Their mixture of glorious melodies with massive distortion has definitely been a big influence. Doing gigs with Deftones and Dillinger Escape Plan has helped us to feel “it’s ok to rock out amongst all our electronic ambitions too!”

How much do you feel your backgrounds and early experiences of music (Classical and Jazz among them) have continued to shape the sound of Three Trapped Tigers?

Betts and I grew up loving rock, metal, but also funk. Those things are all apparent on Silent Earthling. We went on to study jazz. Whilst you don’t hear any solos or improvisation on the record, certain chordal ideas and melodies will undoubtedly have some jazz influence.

Tom used to do classical composition, which may account for his priority for melody when he writes, or what he wants to hear from TTT, but he had a jazz phase too! Really though he formed the band to specifically play un-jazzy music influenced by electronica and that was something that Betts and I were up for too.

You talk about the place as being important to the making of the record and of being ‘very much entrenched in South East London that summer’ – in what way did the character of that place come through and influence the record? When you listen to the record what about South East London do you hear?

I can’t say it sounds very ‘South East London’, other than we felt very relaxed in our usual rehearsal space in Deptford when getting the material together, and then the record was largely put together in my flat in Peckham – so it’s quite honest and DIY.

Tom and I have since moved to Berlin so who knows if that will influence how the next record is made or sounds.

Your live shows are something else – how much does the ability to play the songs live influence the composition and recording? Is it something you work out up front or after recording?

We have always wanted to be able to recreate our sound live without resorting to backing tracks or too many samples. Even though on this record we relaxed our attitude to that, as we were arranging the keyboard parts during recording, I did have in my head how it would be possible to recreate these.

Once the album was finished, Tom and I spent a long time working out the technological logistics to enable this, and Tom has done an amazing job of learning how to play not just the notes but the tap dancing on various controller pedals to make it work!

Betts’ electronically augmented drum stuff has progressed on this album too – especially on tracks like Tekkers, Hemisphere and Elsewhere, but also quite subtly on Kraken too.

What is the most challenging part of a TTT record? The most satisfying?

For me, recording involves creativity but is never the part I’m worried about. I have my own insecurities about mixing, but ultimately I think if the material is strong, that is what will shine through. So, the most challenging part is getting material that we are happy with and feel really committed to, but having that down is the also the most satisfying.

I like that our live show is a good spectacle. I know that a lot of people are quite transfixed with Betts’ drumming, and rightly so. But I hope that they get a more complete experience than coming to see a bunch of musicians being technically impressive.

A lot of love goes into crafting every part of the music – I know there’s more to it than loud shred! As a band, I want it to be exciting to play, never too indulgent, and hopefully as if not more exciting to listen to, and never boring.

Where is Three Trapped Tigers sound and evolution as a band headed next?

We wanted Silent Earthling to be more electronic than Route One Or Die, and actually it is, but I think we are all interested to see if it can go even more in this direction whilst being exciting and satisfying to play.

Interview by Sarah Lay. You can find Sarah on Twitter and her author archive on Louder Than War is here. You can hear her provide the recommended track of the week every Tuesday from 8pm on The Rumble with Pete Darrington on Radio Andra.