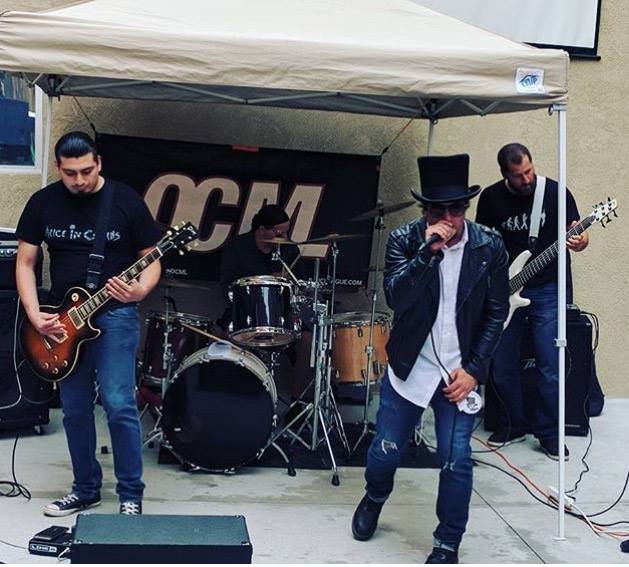 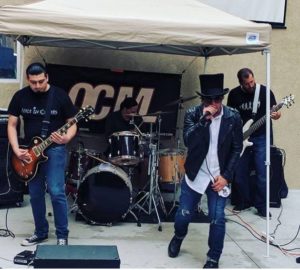 Saint Blasphemer, the Santa Ana alt band have recently released their new EP, entitled: “Theotokos”. Its sound compares to Peter Gabriel, Nirvana, and Jane’s Addiction. Their live performances are powerful and electrifying. The band’s philosophy is “Remember when you were a kid, how a song could make you feel like you weren’t the only one going through something? Our goal is to make music that can do that for other people”.

Saint Blasphemer are composed of vocalist frontman, Thomas Monroe, who has been praised for his lyrical poetry, Steve She’ll on bass guitar, Steve Ybarra on drums, and John Castellon on guitar. Just coming off a tour, the band will be writing and recording a new full length album shortly, and hope to tour again in the fall.

Louder Than War spoke with frontman Thomas Monroe about the band, their music, and their future.

Louder Than War: Lets speak about your band’s philosophy.

“The reason is we are very close to the music industry, being in Orange County. Some of the band members are like, “what if someone wants to give us a record deal?” I say, “listen, we’re not doing this to get a record deal. We are here to stand for something, to make authentic music, and hopefully make someone else feel like they’re not alone.” It’s very important.”

Louder Than War: How long has the band been together?

Louder Than War: You’re pretty tight for 14 or 15 months of being together.

“Well, when we started it was a little crazy. We were playing 4 to 6 shows a month, in the beginning. So we got a lot of practice in.”

Louder Than War: Who writes the music?

“Initially I wrote about 15 or 18 demos that were recorded on my lap top. Then I put an ad out on Craig’s List. That’s where I found the guys. Since then we’ve been collaborating. John actually came up with the music for “Theotokos”. I just came up with the lyrics for that one.”

Louder Than War: Thomas, who were you inspired by musically when you were growing up?

“I really loved The Pixies and Jane’s Addiction. They were my two favorite bands.”

Louder Than War: You have a really unique sound, how did you come up with the very unique name, Saint Blasphemer?

“Well the name comes from one of my favorite novels, The Last Temptation of Christ. It’s a movie I really like too. David Bowie played Pontius Pilate, Will Dafoe played Jesus and Peter Gabriel did the whole soundtrack. I really liked the movie and the name is from a line in the book and the movie, where Jesus is arguing with the Priest, and he says, “Don’t you know who I am, I’m Saint Blasphemer”. I liked that.”

Louder Than War: Are you presently touring?

“We just got back from a tour of the West Coast. We did another regional tour last October when we released our first EP. We are possibly going to do a tour, and try to get out to New York City in September. We will see how it goes. If we get enough sales on Bandcamp you never know what will happen.”

Louder Than War: If there was something you could say to your audiences , what would that be?

“Follow your heart and never give up on your dreams.”

Louder Than War: I feel like you are a very deep kind of person, like you have a lot to offer the world.

“I’ve been reading books all my life. I’ve moved around a lot. I spent a lot of time in libraries.”

Louder Than War: Is there any song in the world that never fails to evoke some emotion in you when you listen to it?

“So many…I love listening to “Musical Box” by Genesis, when Peter Gabriel was still the singer.  I love Dear Prudence. I love all of John Lennon’s writing. Songs change their perspective over time. You go through different experiences, then you go back and listen to a song and it takes on new meaning. I find even when I write songs, a little time goes by and then they change their meaning for me too. I get into them a different way.”

Louder Than War: Is their a particular song that you do that gets a special response from your fans?

“On the new EP “Road to Nowhere” is often a song we close with. It gets kind of big and a little punky and thrashy at the end and we are usually doing a lot of jump kicks and things. So we get a lot of reaction from that. People don’t know what’s going on.”

Louder Than War: Can you think if any funny experiences you’ve recently had touring?

“Yeah. On this last little tour we just did, we went out and played a lot of record stores. When we got to San Francisco, we didn’t have anything booked. So, I brought an acoustic bass, and acoustic guitar. I told the drummer to bring his hand drums. We never ever played acoustically ever. We never did it. Steve our drummer had scoped out the neighborhood. He found a record store in San Francisco that was willing to have us come play. We were about to head down there and John and Steve Shell asked if we should practice first. I said. “No, no, no, it’s going to be fine don’t worry”. We went in there and just cold played acoustically, for the first time with the hand drums. There’s a video of it on our Facebook. It actually turned out really good. It was just a sink or swim moment. Afterwords everyone thought it went really good. And I thought if we had practiced, then we would have over-thought it, so I thought “Let’s just do it”.”

Louder Than War: So, you went to San Francisco without having a gig and just decided to find one? Seems a little scary.

“What happened was we were working with this booking agent for about six or seven months. He was keeping us in four shows a month. He booked our last tour. He was doing a great job. Then come around February, he suddenly stopped working. Nobody knew why. We were eight weeks out for our tour for this EP. We had to let him go, and I was left to pick up the pieces. I had to throw together whatever kind of tour I could. We already had the time off work so we were going on tour regardless, even if we had to film ourselves playing on a street corner in each one of these major cities, that’s what we’re going to do. But we are going to go out and play and support this EP. We just kind of went for it.”

Louder Than War: Where would you like to be in 10 years?

“Hopefully we will play shows and more people will show up, that’s my goal right now. I’m hoping we can reach more people. I hope that we inspire people to play the kind of music that we like. We’ve reached back to all of our roots with early Jane’s Addiction, Tool, and Alice in Chains. We hope to inspire people to play more rock that is less pop-influenced. There is a lot of pop going on especially on the West Coast. There’s a whole trend of what’s called psych-pop. It’s kind of like if you take punk and play pop punk. So instead of alt, it’s like pop rock. Compared to our influences and what we claim is some of our favorite music, it’s kind of watered down. We like to see people get more into the darkside and more into the rock ‘n’ roll feeling, that we used to enjoy.”

All words by Eileen Shapiro. More of Eileen’s writing can be found in her author’s archive