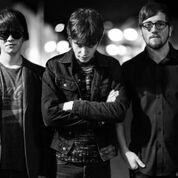 American Sessions is the brand new up and coming release from the captivating Welsh rockers, The Stangs. Quickly growing in popularity, the 3 piece band with members including: Graeme Heath on guitar and vocals, Josh Lomas on bass and Glenn Alcock playing the drums, have an uplifting bunch of tunes including their new single entitled, She’s A Stranger.

Their unmistakable sound draws this band apart from the rest in a Pop Punk fashion, and has brought them to perform at a number of festivals and well-known venues. They have already brought about a buzz in the UK with their creative lyrics, musical charm, and bold sound.

While performing at London’s The Troubadour, they became noticed by producer Michael Baker who invited them to America to record the EP at his New Jersey studio, hence the title, American Sessions”. I was able to speak with 21 year old lead singer / songwriter / guitarist, Graeme Heath about the band’s inspirations, and intentions, and his own unique way of song writing, in his very first interview.

We tried for quite a few years to put some sort of line-up together. We couldn’t get anything to stick. So I got Glenn, the one who plays the drums, and we had a couple of different line-ups before we got the Stangs EP.

You do most of the band’s songwriting, correct?

Yeah, on the EP I wrote, Beekeeper, She’s a Stranger, and Dirty Faces, me and Michael co-wrote, Never Been to London.

What inspires your song writing?

The Beekeeper is my new favorite song. They are all really great songs. What kind of venue do you enjoy performing in?

I saw The Stones and it was quite a massive spectacle, but I don’t think that’s really us. I like smaller venues, clubs and stuff. I don’t like being on a stage particularly. Crowd wise if we could get sort of a younger crowd, because where we are we’re almost like a bubble. Where we are we use to get like an old crowd to come see us. When we started off we did covers. We started to write our own songs and go to the city and meet more, people are more likely to buy your music.

Are you working on something to follow the EP?

After the four tracks are out, there are plans to do more recording.

Where are you guys from originally?

We’re from Pembrokeshire in Western Wales. It’s right in that little corner.

What band influences you growing up?

The first band I was interested in growing up was Slade. I remembered borrowing one of my father’s Stone CDs, but more recently I like Oasis, I’m sort of into them. The View is my favorite band by far.

You are the second person that mentioned Oasis in the past two days. Luke Spiller from The Struts  likes them too.

I used to listen to The Struts before they went to America. They use to have videos while doing live covers. I was into The Struts then.

I heard that when you perform live you give it all you’ve got.

Yeah I am but I play guitar as well so I can’t jump around like Luke Spiller.

Where would you like to be in five years musically?

I hope we’ll still be doing this. This is at the moment a big deal to us cause we never thought we’d get to America. Hopefully things will just keep going because they seem to be accelerating quite nicely.

You would do well with American audiences.

I think the accent is a bit of a novelty. No one could understand what I was saying on the other side.

What’s the craziest thing that has ever happened to you live?

Going to America was pretty crazy.

Do you plan on going back to America?

I certainly hope so, yeah. I know the drummer of the band, Glenn, he always really, really wanted to go.

Is there anything that you might want to add that I didn’t ask?

Just that I try and create characters. Is there anything else that you want to ask me? This is the first interview I’ve ever done.Well you’re doing great.

Thank you. The two boys in the band told me I could do it because I write songs for the band.

Where can fans buy your music?

You can get it on iTunes and Spotify, all the Digital platforms.

What do you consider your genre to be?

We always struggle with that. When we fill things out for clubs about our type of music, trying to describe yourself is a bit hard. When we first started our we did rhythm and blues covers and wasn’t writing our own songs. Now it’s a bit harder.