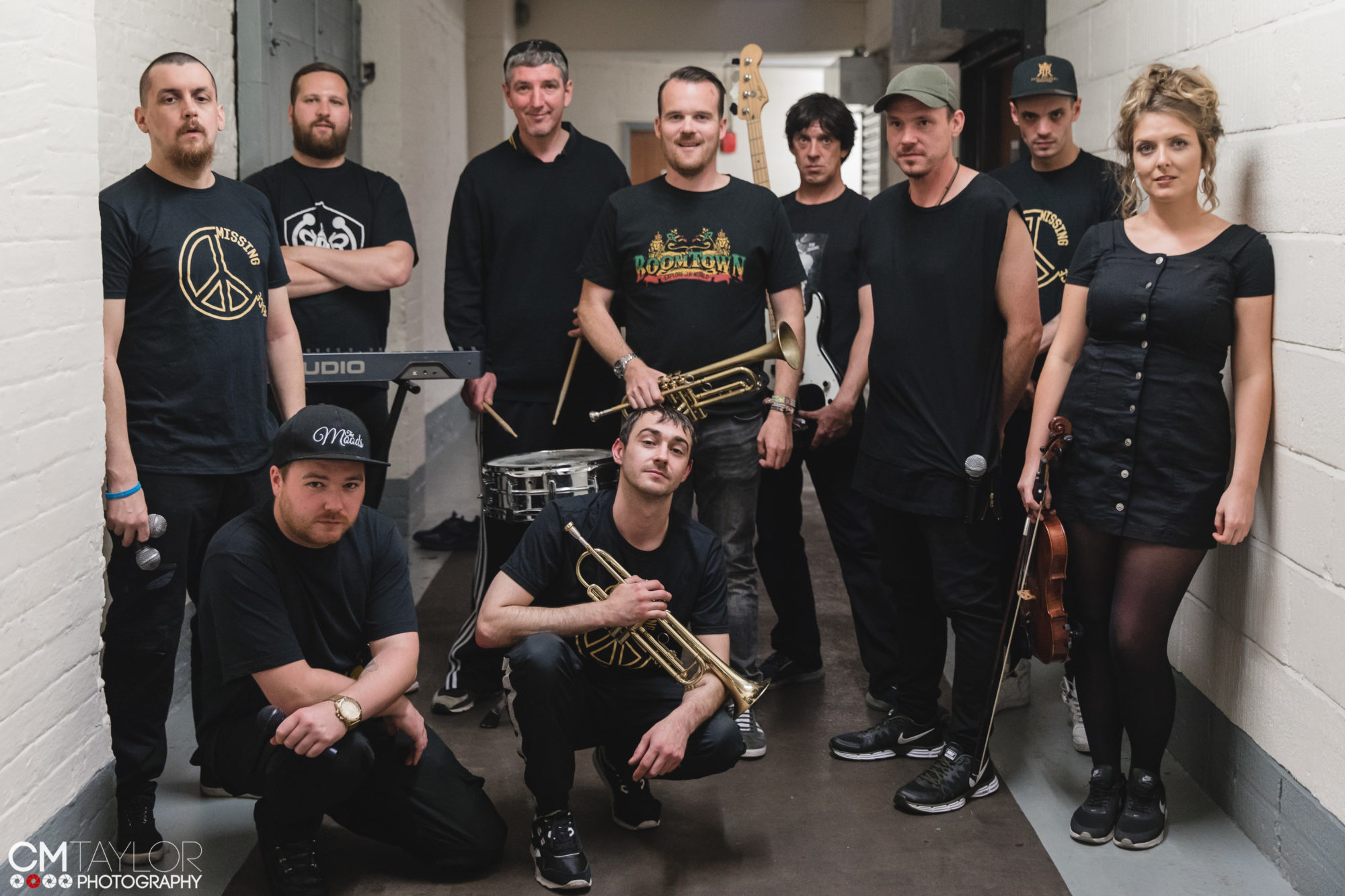 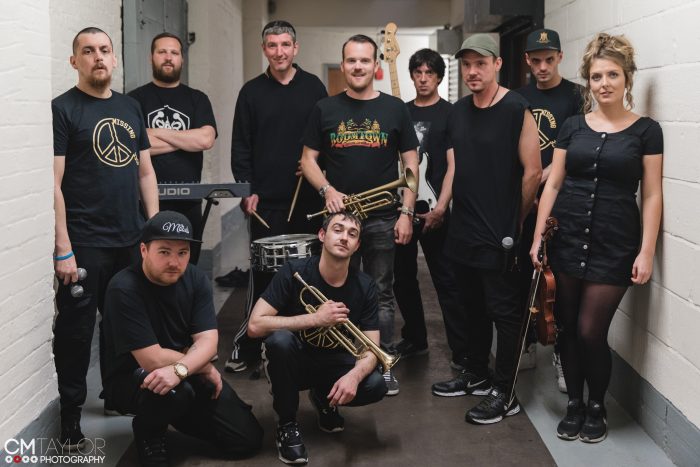 A dance-driven hip-hop collective who crash through the barriers of genre and bring in the best of alt-rock, rap and grime into their mixes. Meet The Moods: a ten-piece from Manchester who are getting audiences in the mood too… proved by a packed-out album launch on 8 September at the O2 Ritz. Louder Than War’s Emily Oldfield spoke to them shortly after…

Following on from the celebratory, muscle-moving momentum of their single ‘Joy’ earlier this year, what makes The Moods stand out is their ability to share those positive Mancunian vibes whilst avoiding nostalgia and embracing the contemporary.

Their new album ‘Missing Peace’ is packed with socially-aware, often anthemic, ever-intelligent tunes including the single ‘P.O.P’ (Profit Over People) which exposes capitalist corruption whilst keeping catchy. A combination of social sensibility and serious rhythm which shows a refreshing step away from those guitar-heavy bands we may associate with homegrown Manchester.

They don’t just express rhythms either, they respond to the reality around them. The Moods headlined a Manchester Creative Collective gig at Jimmy’s NQ, shortly after the Manchester Arena terrorist attack in May 2017. They proved that a city and its people will not be silenced, showed ability of music to mould meaningful connections and unity.

The Moods are coming to the end of a four-month UK-wide tour which included a single launch party in their home-city back in June, plus gigs in London, Liverpool and East Lothian in July. A number of festival appearances have included Audio Soup, Party In The Pines in August and the upcoming Rec Rock Festival in Buxworth.

1) What has the last year in 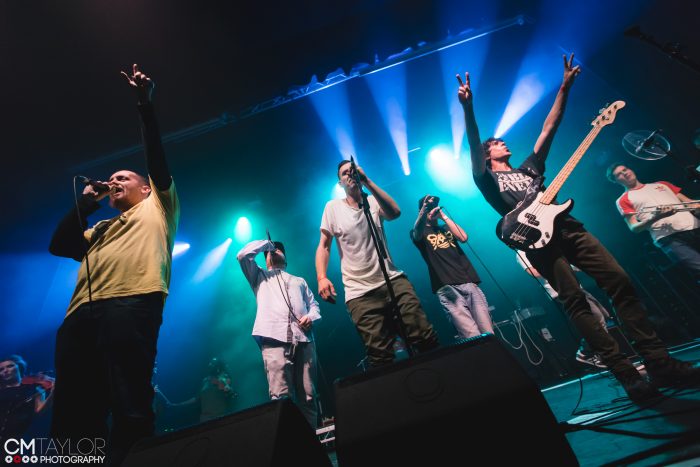 volved for The Moods?

We’ve had a really busy year. We signed a development deal with A1m Records at the start of the year and they have built a great team of specialists around us. We have since completed a UK tour, played some great festivals, released 2 singles and have an album coming out on 29th September.

“A1M have also recently secured a great distribution deal with Brighton based ‘Republic of Music’ which will see our records in major high street retailers like HMV and FOPP as well as iconic indie label shops like Rough Trade. We have also gained another new member to our collective in the form of Alice Needham, our new violinist as 9 members just wasn’t enough!”

2) You are a big group of people – can this be a creative challenge, or is it more like creative fuel? Do you feel that you are ‘on the same page’ a lot of the time when it comes to making artistic decisions?
“It’s more creative fuel having so many members and we’re never short of ideas. We are into all sorts of different music between us and I think that is reflected in the music that we produce. As a collective we all have different strengths which work well and we’re pretty much all on the same wavelength as a bunch of mates.”

3) Tell us about one of the most memorable live experiences you have had recently?
“Our album launch gig at the O2 Ritz was unbelievable! It is a night that we will remember for a long, long time. The energy in the building all night was crazy. The place was absolutely bouncing! We had some brilliant bands play before us as well and it all helped to create something that will live long in the memory for everyone who was there.”

4) A really noticeable thing about your music is its blend of genres – why have you gone with this approach?
“As I touched on earlier, we listen to so much different stuff between the 10 of us that it’s kind of inevitable that we would blend so many genres. We also have an ethos that nothing is off-limits in terms of types of music we will delve into. Too many bands pigeon-hole themselves by playing one specific type of music but that’s not for us, there’s too much good stuff out there to limit ourselves in terms of what we should or shouldn’t play.”

5) Do you enjoy your Mancunian roots and playing in the city, or do you think part of the point of music is to transcend those geographical barriers, or perhaps both?
“It’s a little bit of both I suppose. We’re proud of our musical history as all Mancunians are. We’ve produced some amazing bands as a city but we also want to create our own sound too. You do get an element of bands trying to re-hash stuff from times gone by, but to us it is really important to try and push things forward musically and hopefully create a new era of great, original Manchester music.”

6) How would you say you maintain your artistic integrity in an age of over-saturation?
“We have a real belief in what we say and what we do. I agree there is an issue of over-saturation but hopefully the musician’s that stay true to themselves and persevere will shine through in the end.”

7) What next from The Moods?
“Our album ‘Missing Peace’ is out on 29th September and we have just released our latest single ‘P.O.P (Profit Over people)’ along with its video that has been released through VEVO. We will then be heading on another 15 date UK tour with dates to be released very soon.”

8) Which bands/artists local and national are you digging at the moment? 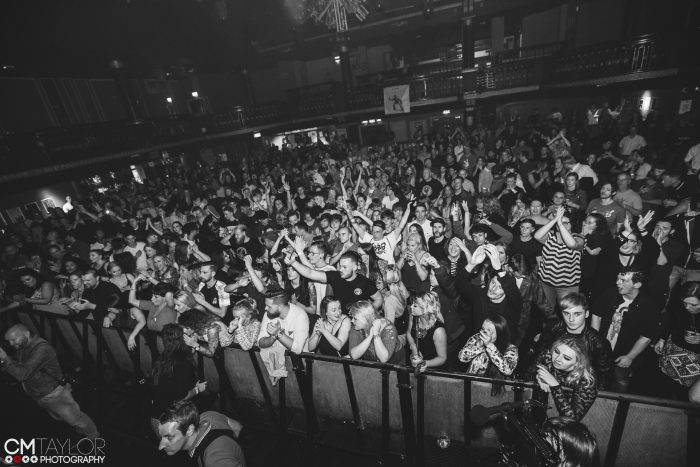 “Acts like Run the jewels, Chase & Status, Rudimental and Damian Marley are consistently producing great tracks that we’ve been really digging for a long time. On the local front there seems to be a real ground-swell of talent and its exciting times. It feels like people are starting to get the recognition and platforms they deserve. There’s loads of great stuff being produced in Manchester at the minute but we’re really excited by the likes of Virus Syndicate, The Mouse Outfit, Levelz and Children of Zeus.”

9) Is there one thing you would like people to gain from listening to your music?
“Over the years we have always held a common goal in our lyrics, which is to be thought-provoking, to install positive vibes and to inspire people to think for themselves. If people are to gain anything from our new album then hopefully it will be these ideals.”

Photography: with thanks to Calder Marley Taylor Photography
Words by Emily Oldfield. You can find more at her Louder Than War Author’s Archive and she is also on Twitter as @EmilyvOldfield