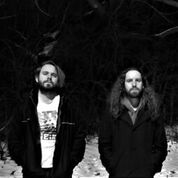 The Long Dark Road has a frontman with a story that reflects in his work and music, Jeremy Cavan and the band will be releasing their self titled EP on 8 April 2017. The essence of this group is in the title of the band. Their music is large, black punk, creative, captivating and authentic.

Members, all from Canada, include: Rufus Cavan on the bass, Toby Cavan on drums, and Vanin Feral on guitar. Jeremy Cavan (vocals and guitar) was plagued with issues such as band member replacements, fears of being unemployed, poverty, and set backs of mental illness, while recording this release. His music is brave and fascinating, and his answers to my questions were just as brave.

Louder Than War: What is the significance of The Long Dark Road?

The name comes from a poem I wrote which for me was a kind of acceptance that not only was I most likely going to be poor my whole life, but that I would not ever be able to pull off being mentally well. At the time, it made me feel better to say to myself, ‘you are unwell, you are a broken robot’, it still does. So, The Long Dark Road represents my journey as a not so perfect human, in some ways it’s a mockery of the poem The Road Not Taken by Robert Frost, unlike frosts poem I’ve never felt as though I’ve had a choice regarding which path I could take, so my poem is about a long, dark, one way road. It’s probably not as depressing as it sounds.

What inspires you to write the music that you do?

Novel things in general inspire me. I often find myself irritated or angry or without an adequate means to express my thoughts or feelings – that too gets me rolling. Sometimes I’ll hear a song or an album and think, ‘if that just did this I’d love that’. Music for most musicians –  especially those who don’t make a living from their art – is a compulsion used as a coping mechanism.

Your songs seem to be filled with emotion and drama. Was that on purpose or something the writer was feeling at the time?

Haha, that was probably just whatever was going on in my life seeping through. I do like things to be epic, so there must have been some deliberateness involved.

Will you be touring in support of your music?

Frig yeah bud! We don’t have a label or booking agent so it may take some time but we’ll be heading out in the next few months (most likely the end of summer). I have two albums to record before then and have to play guitar for my brother’s new project. We’re always playing around Canada, we did a cross country tour last summer.

Is there a song or passage that never fails to evoke emotion?

I’m a huge fan of a lot of music, so that’s a loaded question. To list a few, Roses by Skeleton Key, Making No Sound by Tubring, the album Hang by Lagwagon, I grew up on tech punk so I still love that sound, Dream Home by Deafheaven, Largo from Symphonie From the New World by Dvorak, EVERYTHING by Nomeansno, even some Nirvana and Foo Fighters, I feel like this list might get too long… Free Salamander exhibit… Mr Bungle…ok I have to stop.

What is the definition of music to you?

Music for me is melody. I know that there are a lot of people convinced that rhythm can be the sole delivery mechanism of music, but not me. Even in the Long Dark Road, a rhythmic and loud album with loads of hardcore and black metal influence I made certain that the melody was there always. People are scared of melody and its power, maybe they think it’s lame or whatever so they scream or make atonal music, music like that can be technically complex but usually doesn’t deliver emotionally.

I have a tech punk album I wrote called Got Social that is getting recorded in two weeks which I’m excited for, it’s all about the sing along, people getting together and givin er! It is very different from The Long Dark Road. I’m in the midst of a mega piece as well, it will be very weird and I’m playing all the instruments on it. I’ve never done that before, we’ll see how that goes. My long-time band (U) the band will be doing a new album next year which is a progressive rack and ruin band so expect self-indulgence and discomfort from that haha! If I can ever get enough money I’d kill to do a big score with an orchestra.

For more information on The Long Dark Road find them on Facebook and Bandcamp.