Home Music Bands The Kiss That Took A Trip: – interview 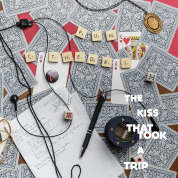 A long-in-the -works musical project has just been unleashed to the world via The Kiss That Took A Trip, and is entitled Punk Cathedral. The master mind of The Kiss is M.D. Trello, and is the sole member.

The Kiss builds his music with synthetic sounds and uses a computer, but refuses to consider his music electronic. It’s more of a mix of styles including Orchestral pop, experimental, ambient, new age,  and progressive. Most of it is instrumental. The Kiss also operates on a “pay only if you wish”  ideology and stands for free music and Creative Commons licensing.

Louder Than War: Your music is wonderfully technical, how do you create it?

From a creative standpoint, I try to wait for inspiration to arrive, but I don’t avoid just fiddling with sounds either. Usually I don’t have trouble coming up with ideas for songs, and that’s also the quickest part of the process. From there, it’s like taking care of a garden: some songs seem to grow strong and others dry up, so the task of leaving tracks off an album takes place really early. After that, when it’s time for arrangements, it’s when I get more cerebral and everything drags for months.

From a technical standpoint, the vast majority is just me and the computer. When I feel really interested in a texture or there’s room for improvisation, I use the guitar or the keyboard.

Where does ” The Kiss That Took A Trip” come from, it’s very imaginative.

Credit goes to Acid Mothers Temple, a great band from Japan that happened to name one of their songs “The Kiss That TookA Trip”. I was infatuated with that song title at first sight, so I named my one-man band after that tune. It allows for a lot of interpretations. It clicked right away.
The style of your music is fascinating, and defies genre, how would you describe it to the world?

It’s funny because my music seems to be very polarizing when it comes down to classification, even with the most general labels. Some people say it’s very inaccessible and others say it’s mainstream in a peculiar way. If I go by what they say, then I gotta get better at what I do, because the goal is to achieve a mix of both worlds.

If I have to speak of genres, there have been changes and evolution since the beginning. My last album is just a catalog of what I have explored along these years. You can find slow electronic ballads, instrumentals, minimalism, epic rock, distorted pop, and the kind of post-rock I still like, because in the last decade post-rock has turned into a stale genre, in my opinion. Nowadays, most post-rock bands just adhere to a template of constant arpeggios and delay pedals.
Is it correct that up you do not tour and if so why is that?

Absolutely correct. Due to lack of time and resources, the huge levels of difficulty to translate my music to a live stage, and the thought that touring kills creativity and can turn an activity that should be based on freedom into some 9-to-5 job. I’m aware that 99% of artists think different because they speak passionately about playing live, but it’s what I think…
What inspired you to create this project?

First and foremost, the feeling that we all need to express ourselves. I had a lot of music inside me that I just had to get out. Second, realizing that the music world was running out of the type of music I’d like to listen to. I wanted to do my part covering that niche.
What music aside from your own inspires you?

I’m fairly eclectic and I go through phases. I love almost everything from the 90s, and I listen a lot to the pioneers of post-rock. Ambient, contemporary classical music, industrial, shoegaze, hard rock, new romantics, gothic pop… all of that mixed with thrash metal, hair metal and AOR. Yes, I know, a complete mess.
What is Victorian Bug?

It’s a side-project where I throw everything that it’s dark, ugly, noisy, obscure and offensive. It’s like a therapy. Every time I’m bored with arrangements or just pissed off, I have a field day generating dark and morbid sound sketches. Most of them go to the trash, but every now and then you come up with a “moment” that can be stretched and worked upon. The Kiss That Took A Trip owes most of its longevity and good health to Victorian Bug. Without the outlet that Victorian Bug is, my main project would have burned out.
Does “Punk Cathedral have a particular theme or story?

Funnily, it’s my first release ever to not have a theme. All my prior work revolves around (although somewhat vague) concepts. “Punk Cathedral” is just a collection of songs. There’s no unifying theme, but its sound originates from imperfect and carefree creation. It feels like a fresh album that does not care about anything else than making for a fine tracklist.

Is there anything else that you’d like to talk about that I didn’t cover?

Lately, I’m very interested in the visual element of the music, so I devote more time to produce videos, even if they have low production values. I’ve released a video for “Faulty logic can cost lives”, the lead single, and I’m about to unveil the video for “Ambient punk”, the track that starts off the record. All my videos can be found on my YouTube channel.

https://www.facebook.com/pages/The-Kiss-That-Took-A-Trip/82584501736
All words by Eileen Shapiro. More of Eileen’s writing can be found in her author’s archive.