Home Music Bands Interview: The FMs: “They Simply Want to Save the World Without Being... 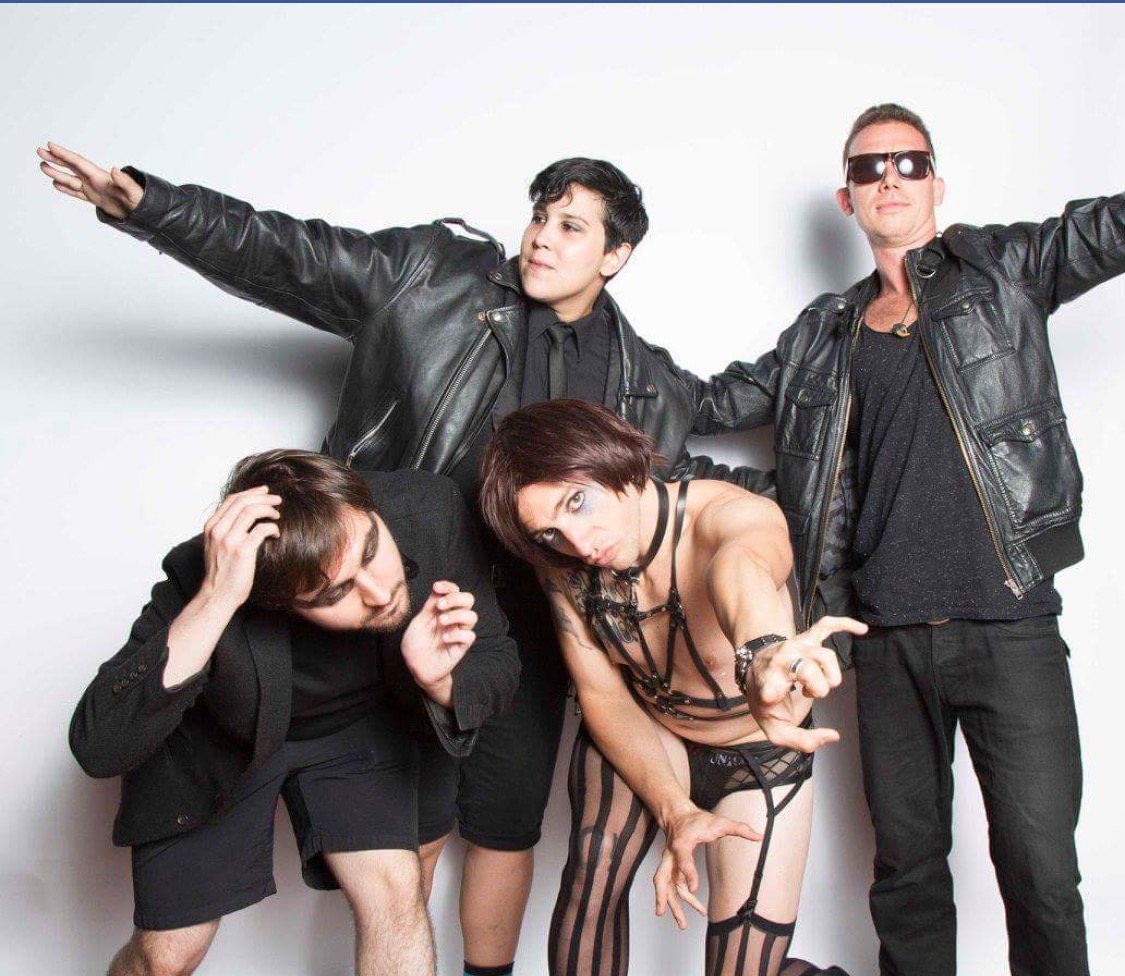 Deliriously haunting and powerful, masters of dramatic  goth, vivacious punk, passionate ska, with blasts of glam and sparkle,  just touches upon the description of the FMs. Their orgasmic presentation challenges both genre and gender, and the world in general. 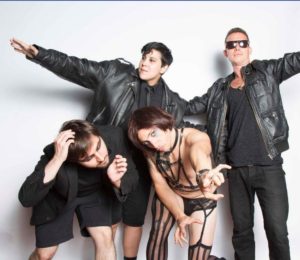 Visionary frontman Matt Namer turned to music when the desire to do something important with his life took hold of him….however, he’s much more than that. He and the band coaxes the audience into a state of hard core fantasy and then magically projects them back into the real world causing a revelation of reality accompanied by a vibrant journey into a danceable frenzy, I met the band in the dark confines of the chic venue, “Bowery Electric”, and watched as they proceeded to light up the room with their music, their androgynous attitude and their audaciously salacious fashion.

Louder than War: Your band is filled to the brim with concepts and messages, and really different than anything currently out there. How did it originate?

The first two members that got together were Frances Rex and myself. Frances and I have known each other for a long time. We were actually in our first band with each other back in high school called “The Violent Orange”. Frances is the other lead singer and guitarist, but was actually the drummer of the band back in high school. I think her real talent is singing and writing songs and playing guitar. Since that time of The Violent Orange, she has been involved with a lot of different projects and has written some incredible music, and performed it. I’ve just always felt  (for probably like 10 years or so), that it would be cool to be in a project with her where she’s playing guitar and singing and I’m playing bass and singing. So that was the origin of it. Around the same time that we reconnected I had started thinking a lot more music again, I got my own studio which is on the boat that we have….

I never told you about the boat?

There is a giant old ferry boat in Brooklyn that I’ve been involved with for a number of years. We have our music studio on it, and we also produce underground concerts and events there. It’s a hundred and fifty foot long boat, and has hosted events for up to a thousand people before, although now the events are more like 100 to 200 people. So I started producing a series there called, “SUBVERT”, it’s kind of like a call to action to be subversive and such.

So you’re a visionary as well as a musician?

I’m probably too modest to refer to myself that way….Those events are really experimental. I’m just trying to do something that is really engaging to the sub-culture as much as possible, and pushing the envelope in terms of taboo and what we can do with events, while still maintaining a safe space where people can come. So that’s what I strive to do with each event. What it ends up being is a combination of live music paired with burlesque performances. The last performance we had was with people doing live hook suspensions from this big  pyramid while we were playing a concert inside of it, which was on top of the boat. The next event that we are doing is, we’re setting up like a dungeon and play stage in the boat under where the band stage is and having a lot of LGBT burlesque performances, and some kinks stuff, and some cabaret music with goth music….Did you get to see the music video that we shot?

Send it to me please.

Its pretty cool, you should check it out. We have about one hundred and seventy thousand views on it so far between Facebook and YouTube. It was actually shot on the top of the boat mostly and the surrounding area.

Who’s responsible for this boat?

Myself and three other people, but there is a community that’s developed around it.

So circling back to the original question of the origin of the band….

So having my own studio space has sent me into this deep, really creative mode. It’s a little bit related to the starting of this project. So my friend and I came together after ten years or so after not making music together, and it seemed like a really great fit for us. We realized too that both of us were interested in gender queerness and androgyny, and not identifying not always with masculinity for me, and femininity for them. It made for an interesting kilter, a point for the band to have two lead singers who were both kind of gender queer but one is more man, and one is more woman kind of thing. So we started The FMs.

What does the FMs stand for?

The FMs stand for, a few different things. It stand for, “Fems”, it stands for the female/male, and it stands for some other little things that we’ve thought of like, “Fuck Me”, and then it also happens to be Frances and Matt, our names.

Matt, how old were you when you began to be interested in music and writing songs?

What actually made you decide to make music a career?

I originally decided to be a musician when I was 15 years old, and 911 had just happened. I separately was going through my own evolution into being a teenager. I was kind of always interested in playing music, but I had a bit of an epiphany on a mountain one day where I was thinking that I should be doing something important with my life. That important thing was music.

What would you label your music if you had to give it a genre?

How many words do I get? To be honest I think I want to re-tool how we describe ourselves. It’s not something I’ve totally figured out yet, which is good and bad. Definitely a little goth, a little industrial, a little glam, and you can dance to it.

You released an album recently, was it your debut record?

We released an album in August. It was our debut album. We had a music video that came out with it as well, the one I was telling you about before, called “Implosion Model”. The album was a bit of a concept album actually. It’s called, “Machinacene Epoch”, and basically the title came from this idea that the geologist in the world kind of decided that human being’s influence on the planet geologically is so great that they have declared the “Anthropocene Epoch”, (dawn of human-influenced age). Humans have had such a huge impact on the Earth defined by plastic pollution, nuclear tests, and domesticated chicken that a new geological epoch needs to be declared. We sort of flipped that idea and said the we’re actually not in the age of human beings, humans haven’t really altered the planet. It’s the artificial world that human beings have sort of helped enable. That artificial world is this sort of a life  onto themselves. The machines are sort of the ones shaping the planet.

Wow. There are no words…..so, are you currently working on any other musical projects?

Everyone said that we just released something in August so we don’t really have to make new music for awhile but we feel like we are a really new band. We’ve been together, the four of us since June really. So for me and the rest of us we sort of feel that we have a huge amount of room to evolve. So we are working on new recordings already and I think that they are much more sophisticated even then where we were at with our last album. I feel like we’re tapping into new things with some of the new music that we’re making.

I think that I probably do most of the song writing, but all of us get involved in different ways. Its not like there are really any kind of rules around it in terms of who writes them and who doesn’t write them. We try to have as much of a democratic process as possible and anyone that has creative content that they worked on can bring it to the band and we can decide if it’s good stuff to work on further.

I have a few heroes. One that probably comes to mind is David Bowie of course. I feel like Maynard James Keenan from “Tool” is also an inspiration to me. Music and the mix of comedy and politics with his music, and also he has an incredible voice. I just really respect him a lot as an artist. Trent Reznor of “Nine Inch Nails” too.

If you were a superhero what would your power be?

This is going to sound really corny but maybe to help people learn to love. If I could teach Donald Trump how to love people truly, it would be a wonderful thing.