Home Music Bands Interview: Terminal Gods – we talk to the lead singer of the... 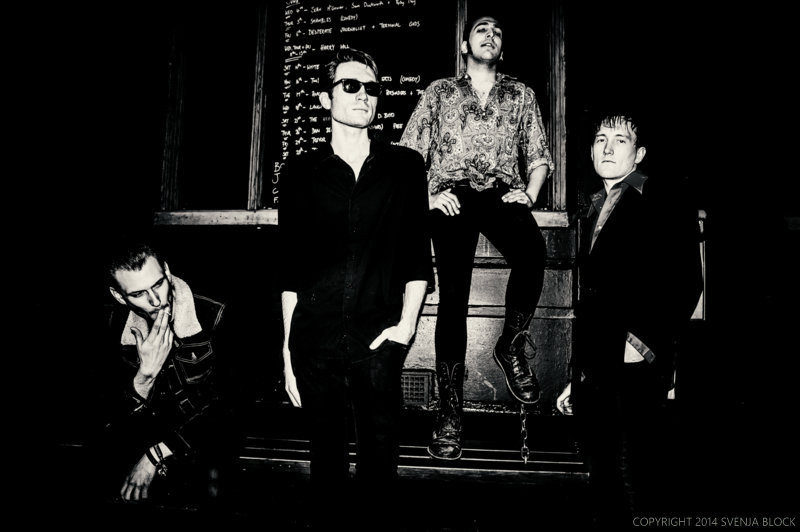 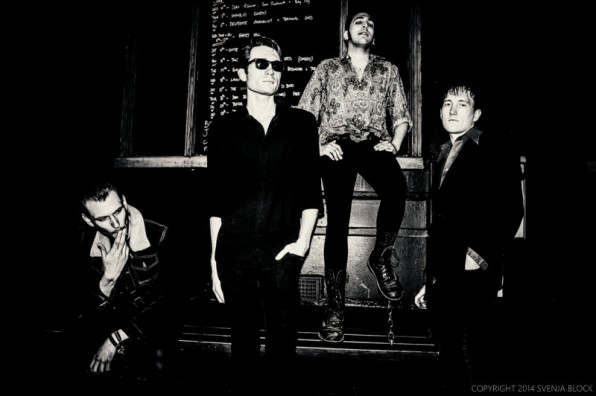 Terminal Gods cite influences from Nick Cave to The Stooges and from The Cult to Automatic era Jesus & Mary Chain, but the band are no copycats – they have their own identity to0, one which has seen their “runaway freight train of dark, new heavy sounds with a pop sensibility” gaining in popularity as they continue to tour heavily and release a select stream of releases on their favourite medium, vinyl.

In their short time together they’ve toured their “machine beat, chorus heavy anthems” through mainland Europe four times including Norway, Germany, Italy, France and Spain and have kept a considerable following in London selling out the upstairs at Garage and The Camden Barfly all on the back of their last release.

With the band about to celebrate being together for three years, Louder Than War’s Sophie Sparham caught up with their front person and song writer, Robert Cowlin, to talk about The Gods past, present and future, their love of vinyl, what inspires them and much more.

“With a mixed melting pot of melody, texture and influence, The Gods are classic songwriting personified, with exquisite arrangement and glorious production which harks back to a golden era in British songwriting.”

You’re just finishing up touring at the moment – how’s it been?

The tour was a huge success for us. We constantly play in London to a strong following, and whenever we’ve performed on the mainland the crowds have been huge. We wanted to see if we could pull it off outside London, so we arranged a couple of Scottish gigs with some old friends and managed to wangle some extra shows in Leeds and Wolverhampton to break up the drive back. Suddenly we had a mini-tour on our hands. Tack on a warm up show at Power Lunches and a post-tour party at the Buffalo Bar and we were all set. I think the Scottish gigs were my favourite and we’re already planning our return trip. 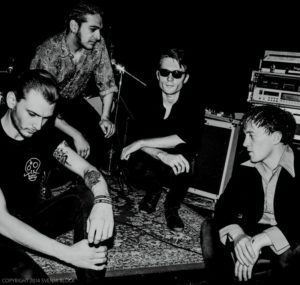 Favourite show so far or most embarrassing or strange thing to happen on tour?

The weirdest thing was December 2012, our first tour of Italy. It’s snowed for the whole trip and the last gig was in the little known town of Cesena. When we arrived it turned out to be a communist social club run by a bizarre landlady who would set any drink you wanted on fire. Halfway through the gig an enormous wench emerged from the kitchen, lugging a cauldron of carbonara. The gig quickly ended and we tucked in to the home cooking. We then got everyone in the bar hammered on flaming shots and I became the barman before being spectacularly sick all over our van. Good times!

You’ve played in lots of different countries – which has been your favourite to play and why?

My favourite show was November 2013 in Geneva. We filled out this massive hall and subjected the Swiss to forty-five minutes of well-oiled rocking. Everything about the gig was perfect: stage, sound, crowd. My favourite UK show was February 2014 at the Barfly. Somehow we picked up a load of tourists and everything just gelled.

All good so far. We’ve played some fun shows, put out our first cassingle, and started writing new material for a 2015 release.

So, your new single ‘Cold Life’ has been released for a while now, how’s it going down?

I think most people that have heard Cold Life quite like it. We wanted to draw on the Big Black influence and I think we ended up creating something which is quite different compared to the rest of our catalogue. Our guitarist emailed the track to Steve who liked it.

What’s the song about and the inspiration behind it?

It’s a pretty standard lyrical concept about how what’s on someone’s outside doesn’t necessarily reflect what’s on the inside, or vice versa. It’s not about me though, so my perception could very well be off! The inspiration came from the aphorism “repetition is a form of change”. The guys had constructed this rattling, rolling, repetitive rhythm that could just keep cycling. I wanted to echo that with the simplistic repeating lyrics. The idea is only half realised as I couldn’t resist tacking something a little grander to the end, but it’s a notion that I’m keen to tap into again.

All your releases have been on vinyl, is there a reason you’ve decided to do this?

There are a number of excellent reasons why a band should release their music on vinyl. For us, we initially saw vinyl as a way of differentiating us from the ‘3-track CD crowd’. We wanted a premium product that would reflect our belief in the quality of our music and a 7” seemed like the perfect answer. It sold really well and helped us get some great overseas gigs. I’m so glad we didn’t record our 2011 set and release it as an album on CD; that would have been the death of us. Pressing vinyl is expensive, so we were forced to exercise some quality control and pick our two strongest tracks for the single. Quality control, as we have discovered, is very important.

Vinyl is, at present, the most consumer friendly high-resolution audio format. We record all of our music at 24 bit and by pressing to vinyl we ensure that we retain as much of that recording quality as possible. Vinyl also forces the mastering engineers we work with to make better decisions, sonically, when it comes to things like moderate EQ adjustment and compression. I’m currently on a campaign to rid dynamic range compression from our mastering chain altogether. Enough compression is present at the recording stage (ie, on our drums and guitars) that it really isn’t required in the mastering. Unfortunately, too many engineers still think it’s the late 90s. The loudness war was really lame, give it up and stop ruining people’s music.

In my opinion, a good handle on crest factor is the cornerstone of a successful mastering job. This ensures that a recording’s dynamic range is retained and makes for a more realistic soundstage. Our live shows are dynamic; I want our recordings to sound dynamic too – without compromise. By releasing on vinyl I think we show a greater commitment to the way our songs sound, hopefully this is recognised by the engineers we work with and the people who buy our records. 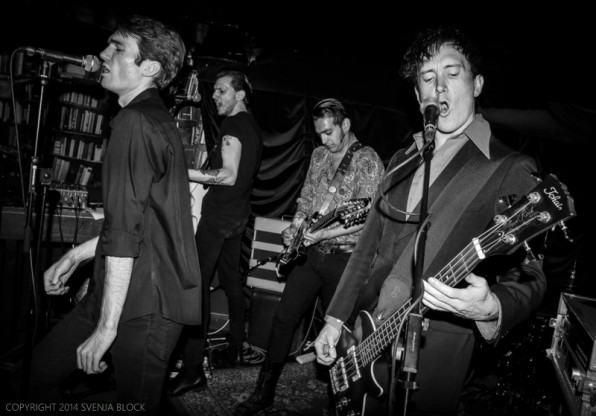 You guys formed 2011, are you surprised how far you’ve come so far?

A wise man once told me that if, after three years, nothing significant has happened then you should end the band and start something else. We’re three years old this August. I’m pretty happy with how the band has developed and I think we’ve achieved a lot in our time. We’ve had some fairly exciting business meetings recently, so hopefully the three year rule will come to fruition.

What inspires you to write music?

I’ve been writing songs since I was fifteen and it’s essentially just become a part of what I do in my spare time. I think I was originally inspired by simple curiosity – ‘how would I sound in a band?’ A friend and I started a two man synth band back before two man synth bands were cool again. We didn’t get anywhere, but we put out an album and played some gigs. I learnt a lot and really enjoyed myself, those five years of learning how to be in a band by being in a band inspired me the most to keep trying and work harder and harder. Now I’ve played internationally and my voice is on wax, all thanks to curiosity.

You guys also run music nights and have your own label – tell me more, why did you decide to do this and how’s it going as a whole?

When we started the band we had this ridiculous vision of spearheading a groundswell of young post-punk rockers, all wearing TG branded jackets and grooving to leather bar hits. We didn’t really know how this was going to come to fruition, and it never really did. Along the way we established a record label, Heavy Leather, which also has a promotions wing. The promotions side deals with club and gig coordination. At the moment it has Roadkill (garage rock gigs) and A New Dusk (post-punk posturing) on its roster. We never could convince the post-punks and the rockers to get along, so Heavy Leather had to set up two separate nights in order to maintain the strict quarantine regulations handed down by the Elders of Holloway. Roadkill has just been promoted to Friday nights, the next one is here, and A New Dusk celebrates its one year anniversary here.

So let’s look towards the future, what’s next for Terminal Gods?

We’re currently organising our third birthday party, which should take place around late August / early September. The tour forced us to play a few ‘safe sets’ recently (all killer no filler). Our anniversary gigs are always far more indulgent affairs. We’ll be playing new material, packing out some previously cool East London venue, and throwing an after party.