Former Louder Than War new artist of the day Taurus Trakker released their latest album last month (our review). Sophie Luchinsky talks to the duo about their latest release.

The phenomenal Taurus Trakker musical success goes way beyond national borders. They became loved and well known not only in UK but in many other countries as well. Being an authentic London sound punk rock band they are always the high point of any gig nut now songs we loved live like Chicken Wings, Dream Inspectors, Upside Down And Shake, Mister B, Tears Don’t Fall and Gurus Of Blues are available on the new album, Death Coaching – a great piece of garage punk soul blues.

Unlike the Building Ten album which is more layered with extra instrumentation Death Coaching is an album that captures the sound of the band as they sound live – guitar, bass, drums, with saxophone and blues harp.

“Building Ten was made on a normal digital format, but this album was recorded live to tape,” explains Martin Muscatt (lead vocals, lead guitar, songwriter),  ‘which gave it the sound we wanted to hear, and captured the energy of Allison’s drums. The addition of Wigsy (James Simmins) on bass has really taken us up a notch. He played a big part in the making of the album. It was mixed by Dave M. Allen, who has produced The Cure and The Buzzcocks. He totally understood what we were going for and he helped make it to sound like the band is in your living room. Also, I like to think the songwriting has evolved a bit.”

“We needed a good rocker to start the album, and this was it,” says Taurus Trakker. “The lyric is a double concept. These days, with corporate politics spreading like a disease, there are many challenges to living your life as you wish. The other aspect is the internal critic, the voice inside that tells us we are not good enough. What I am trying to say is To hell with that – its your life, put your energy into what you want to do.” 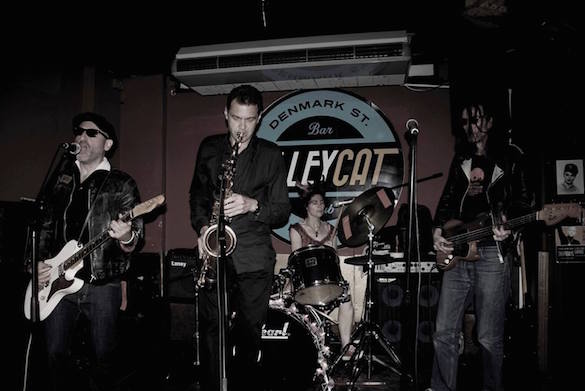 Some songs in the album have blues style with the add of blues harp sound by Norman Bailey – like lyrical Upside Down And Shake – with a sound that can take you back to the 70s.

“It’s interesting that in the 70s rock musicians were studying blues, and looking back to the 30s for influence, that’s a 40 year gap. Now in 2014, we sound like the 70s – and that’s 40 years again’ he continues. “Norman is a great player – he has a blues spirit, and I guess the sound of the harp just conjures up images of those old blues players.”

A very punk rock song is Chicken Wings with great guitar lines and an amazing guitar solo and of course drums by Allison Phillips.

“In London’s working class areas there are fast food fried chicken shops on every corner, and the kids who hang around on the street all buy it. Its cheap, fast and greasy, and it’s served in a box. The lyric is about one of those kids. We may release it as a single a bit later.”

“Mick is really busy most of the time, so we made rough mixes and gave them to him to do in his own studio. We were knocked out when we heard what he came up with – on Motormouth it’s just a simple one note thing on guitar that sits right in the rhythm and intensifies the groove, and his vocals – “Yap yap yap” was a genius touch. And he did play a little piano on Hang On Levi and he also did some guitar and vocal harmonies. When I heard it my first thought was  The Beatles,” say Trakker.

Of the thinking behind Death Coaching they say, “Hopefully people will understand what we mean by the lyrics and the vibration of the album. Some people pay a life coach to help them move forward when they feel stuck with their lives. This life is temporary, we are all going to leave here sooner or later. How do we learn to accept that fact? So maybe we all need Death Coaching instead. The lyrics I write from my experience and feelings – on the new album there are a few songs about people we know or have come into contact with, like little biographies of some characters. And some of the songs are social comment, mostly about the degeneration I see all around. But hopefully with a positive message for change.”

Songs like Tears Don’t Fall In Outer Space with a beautiful guitar solo and Martin’s great vocal or Gurus Of Blues with smooth tenor saxophone by David Wright as well make Death Coaching a varied and unique album.