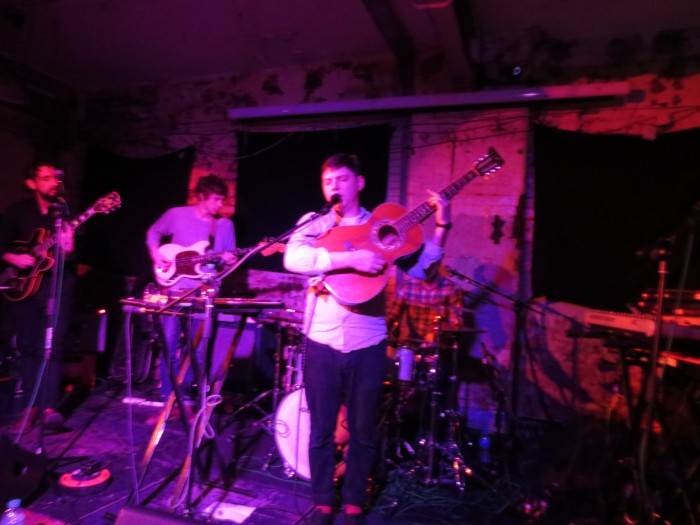 Sweet Baboo is on tour to coincide with the ‘Dennis’ EP’s release. Louder Than War’s Andrew Neal caught up with Stephen Black after his soundcheck at the Soup Kitchen, Manchester.

Music can be modest yet magnificent. Stephen Black will not make grand claims in interviews but as Sweet Baboo he has created a collection of songs, often of humorous bent, that nevertheless are moving to those whose disposition is romantic in a way that embraces the quirks of relationships and who like their melodies to be off-kilter and understated. His most constant champion has been 6Music’s Marc Riley who notes that the third most played song on his show has been Baboo’s “Tom Waits Rip Off” and that the top two, “Shithaussen” and “Spin That Girl Around”, both by Euros Childs (ex Gorky’s Zygotic Mynci) also feature Steve’s deft touch.

Baboo’s latest tour coincided with the release of the ‘Dennis’ EP. Lead track, “We Used to Call Him Dennis” reflects his way with domestic detail, centring on his thwarted desire to name his son after Dennis Wilson and celebrating the embryo’s drumming. The band was into the fourth night of its tour having travelled up from London. Steve was particularly enthusiastic about their show in Margate, at the Tom Thumb, “a lovely old little theatre with about 40 seats.”

Previous encounters with Baboo had seen a variety of line-ups. On their 2013 tour, they came to the Night and Day, Manchester 2013 as a three piece band. The following year had seen solo Baboo tour with Pictish Trail in an unusual double-header where they shared the stage, taking it in turns to play a song. At ‘The Boombox Ballads’ album launch gig in London during May 2015, the band were enhanced by a string section whereas on their most recent Manchester appearance, in Autumn 2015 at The Deaf Institute, they were a five strong line-up.

As Steve explained, the line-up was unchanged from last autumn’s tour, “a five piece band plus soundman. It’s a case of who’s available. It’s not practical to fit the string section into a car, or two cars actually. We have been lucky enough to have the strings with us for most the festivals we’ve played.” Such uncertainty over tour availability means that live versions can be lacking vital components. Previous album, ‘Ships’, had been embellished by horn flourishes and it had been a sign of Steve’s ingenuity that when touring as part of a trio he had filled those gaps with snappy guitar solos. However, this was not a consideration when writing songs. “I don’t think about how they will sound live. I can worry about that later.”

It is a common complaint that the lead-up to Christmas gets longer each year. Sweet Baboo appear to be pushing the boundaries to a ludicrous extent by including “Don’t Be Alone This Christmas” on the ‘Dennis’ EP which is released this February. Would they be stretching the incongruity further by playing it on this tour? “It would be inappropriate to play it at this time of the year. We will do it if we are touring around Christmas time. We wanted it to have a physical release as people wouldn’t automatically have got the free download before Christmas.” The EP includes three covers: Daniel Johnston’s “Mountain Top”, Dennis Wilson’s “Cuddle Up” and The Exciters’ northern soul stormer, “Blowing Up My Mind”.

As Steve has always been happy to name check his musical heroes in his songs, how does he decide which songs to cover? “They are picked on the basis of being able to do faithful covers. The Daniel Johnston one, it’s from ‘Fear Yourself’ which is a great album with so many good songs. The Beach Boys one is such a lovely song.”
On a Marc Riley session, they had taken on and nailed the iconic guitar sound of Thin Lizzy’s “The Boys are Back in Town”, subsequently released on a compilation of Sweet Baboo’s radio sessions. “The Thin Lizzy one, we were given a choice of three that the fellow on Marc Riley’s programme, Rob Hughes, was going to talk about on the Parallel Universe. We were big Thin Lizzy fans.”

The EP’s remaining track, “Do the Buzzard”, sounds like it ought to have been a 1960s dance craze, although Steve is uncertain whether it really existed, another instance of reality and a fertile imagination blending together.
On his last visit to Manchester, Steve had been afflicted by a loss of voice partway through his set, particularly apt for someone whose repertoire includes “The Day That I Had Lost My Voice”. While the protagonist in the song’s speechlessness was due to being love-struck, Steve admitted that, “sometimes it’s psychosomatic. I think it was brought on by the smoke machine. I was fine for the rest of the tour but it is difficult touring. Now you’ve mentioned it, I’ll probably have problems again.” (Fortunately, he didn’t).

“Walking in the Rain”, his country song backed by pedal steel, is invariably preceded by a spiel about how it was his aim for the song to be as ubiquitous on radio stations as Travis’s “Why Does It Always Rain On Me?” on dank days. As its release has been followed by an historically wet winter, maybe he should write a song about glorious hot summers. “It didn’t work though. It didn’t get much radio play.” His performing name, sounding like a term of endearment, had been self-chosen. “It comes from the Charlie Brown cartoon. I picked it when I first start performing while at university. I’m not sure whether it’s a good idea now. It sounds a bit twee,” Steve confessed. (In fact, Sweet Babboo is the term given by Sally to describe her crush, Linus. It is also a pity that 1990s riot grrl band , Linus, are no longer around for a Charlie Brown themed double bill.)

Baboo has an idiosyncratic way with words and images. “Let’s Go Swimming Wild”, a single taken from ‘Ships’, awash in keyboard swirls and a euphoric chorus with surging brass and Steve’s wobbly falsetto sounds like a love song but on stage has been described as being about the Cardiff University library electronic referencing system. He explained, “that’s because my wife is a librarian at the university so it’s just a different way of saying that.”

Equally off-centre in its observations is “The Morse Code For Love Is Beep Beep Beep Beep, The Binary Code Is One One” with trumpets replicating the punchy Morse Code feel . However, as Steve was quick to admit, that is a significant compression of the actual code. Fact fans, it is really bip beep bip bip beep beep beep bip bip beep bip and the binary code 0110 1100 0110 1111 0111 0110 0100. He would have to have been the world’s fastest and most boring rapper to incorporate the full detail into a chorus and been backed by a horn section with inexhaustible lung capacity.

As if he wasn’t busy enough performing his own songs and touring in other friends’ bands, he has also started running cassette label, Amazing Tapes From Canton. The name is not quite as exotic as it sounds. Steve provided the geographic specifics. “Canton is the place in Cardiff where I live. It’s a chance to release things that would otherwise not get a chance. Economically it works. It’s cheaper as you can release a smaller amount, like 100 copies. I’ve released an album by my friends from New Zealand, Droor, as well as ‘The Boombox Ballads’ and ‘Sometimes’ as a cassette single.”

Demonstrating that there is no end to his talents, Steve appears playing saxophone on “Lady Low” from Moshi Moshi Records labelmates, Teleman’s, ‘Breakfast’ LP. Steve told me, “it is my main talent, clarinet was my first main instrument.” Before he can sound boastful, he added, “it’s nothing much really.”
It is apparent that Steve is part of a bunch of Welsh musicians who are comfortable with their own music and each other’s company without feeling any imperative to make extravagant claims to promote the music. Steve has also toured with Cate Le Bon (who wrote “I Just Want To Be Good” for him), H Hawkline (who plays bass in the current Sweet Baboo touring band) and, most recently, with brilliant pop songwriter, Meilyr Jones. As they would be uncomfortable with creating their own hyperbole, it falls to me to add that in a just universe, Sweet Baboo would be adding Gold Discs, Grammys, Ivor Novellos and Brit Awards to their Welsh Music Award nominations.

All words by Andrew Neal. More from Andrew can be found here. He is on twitter as @AndrewNeal66.