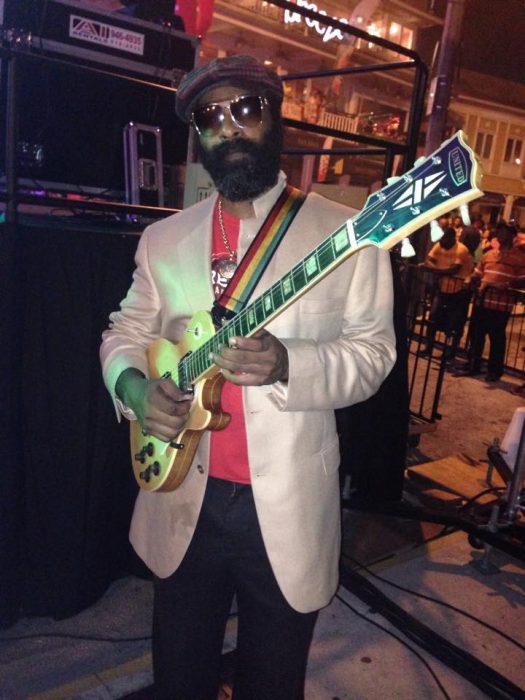 Cayman Islands reggae star Stuart Wilson admits he is rich. “When I tell people I am from the Cayman Islands. They think I am probably ‘well to do’ and I am from the place where all the money is,” he muses. “I can’t say any of that is entirely untrue. To be absolutely honest I am not a poor man. But this is because I see life as an abundant affair and so riches for me are as far away as a leaf of mint or the smell of my favourite spice. I was born into a world filled with rich experiences and so I consider myself to have been born wealthy.”

“Cayman is also one of the most beautiful places in the world and having been born and raised there, I consider myself every bit Caymanian, though my father is Jamaican and I spend the bulk of my time here in Jamaica now.”

Wilson, like many Cayman Islanders, was disappointed with the recent BBC documentary Britain’s Trillion Pound Island, in which journalist Jacques Peretti sought to uncover the unique taxation and business arrangements that the British Overseas Territory has.

“[I think it] was kind of unfortunate and a lost opportunity for the network to have built a bridge with the people of the Islands. I don’t think it was anywhere near accurate and only depicted life from one very marginalised context of the paradigm; the mega rich jet setter. It made the Island seem like it was strictly a billionaire hideout void of any life and culture other than high rolling city slickers.”

“The whole episode also revealed the sometime insidious nature of media at its core and really sort of let the rabbit out of the hat before the magician was expecting in a kind of way for me.”

In contrast to the diamonds-and-champagne perception of (as the locals call it) Cayman, most ordinary inhabitants are trying to get on as best they can, he says.

“Poverty and destitution abide there too,” he reveals. “Unemployment is also extremely high for the average Caymanian, who is the new minority in the country due to the large influx of expatriate workers needed for Government revenue. It it is a fact that the mere outnumbering of the people puts them at a disadvantage in every way. “

“This and many other factors are why I refer to the Cayman Islands as a social experiment. I am of the view that the indigenous people of the Cayman Islands are an endangered group, whose way of life and culture are at peril of extinction and they nor anyone else realizes or appreciates that, at least not publicly, or enough. It really is one of the most interesting things to watch.”

Wilson has worked with numerous artists including Grammy winner Jason Gilbert, who produced the song Rule The World. Wilson also opened for big names including Roberta Flack, John Legend, Damian Marley and, er, Michael Bolton. He said that the last four years or so have been instrumental in his rise.

“In 2012, I met Clive Hunt, whose credits include the Rolling Stones, Peter Tosh and Jah Cure, and a slew of other artists. We quickly developed a respect for each other’s abilities and went into the studio almost immediately to record Three Kings. I did a promotional tour of Jamaica at the time. I recorded two more songs with Clive Hunt for good measure and ammunition for my departure. Those songs were Real Come Back Story and Leroy Can’t be Wrong, respectively. Real Come Back Story went on the become a classic in the Cayman Islands in similar fashion to Rule the World and is one the songs that put me on the international map. “

Wilson and his band Love Culture then went on to play the famous Reggae Sumfest in Jamaica during 2014. Somewhat out of the left-field, but welcome nonetheless, was the subsequent publicity which led to no less than 72 dates in Thailand.

That age-old question of how to describe your sound is always a tricky one to answer, but Wilson gives it a good old bash anyway.

“I view my sound sound as a hybrid, which features hints of jazz, blues and classical rock. In the context with Reggae of all ages,” he explains. “ I think it is like a kind of neo-jazz type of Reggae or something like that but it’s more of a renaissance than a revival.”

“The scene in Jamaica is very healthy right now. There are artists that I enjoy like female singer Jah 9, Protoje, Jah Cure, Chronixx and Tarrus Riley. They are the acts that are getting a lot of air play currently, pulling the audiences and really building great brands and not just bands.”

“As a Caymanian musician who now lives in Jamaica, I think I have had an interesting perspective of the business and I see two tiers of Regge artist. The first is the artist who is content to play shows singing on tracks and doesn’t mind playing a club date somewhere or the other without proper accompanyment and then there are the artist who are building what I refer to as international brands that can compete in the wider market. These include The Cronixx’, the Protojes , Tarrus Riley, Jah Cure… and Stuart Wilson.”

As for producers and sound systems, he admires Stone Love and considers them the hottest around. Clive Hunt is top man in the studio, adds Wilson.

“I am not just saying that because he is my musical director and friend but I consider him to be among the most talented people I know. I enjoy working out of Jimmy Cliff’s home studio at the moment, as it has all the bells and whistles and is very comfortable, as well as close to home. Of course, it does help that it’s Clive’s chief studio at the moment.”

Artists’ lyrical insipirations are wide and rich, he says.

“On the lower end of the spectrum, it’s bad mind, Obeah, best friends and guns and girls and ganja. Oh the higher end of the spectrum it’s everything under the sun, especially new ideas and inspiration. It’s new perspectives based on brutally honest attrition of fallible traditions, cultural practices and mores from the past. “

“The new voice is a filter; saying things new things in a new way but still with a faint echo of only the goodness from the past.”

Right now, Jamaica is the place to be for Stuart Wilson as an artist, he concludes.

“The Cayman Islands has virtually no music industry and so you really are starting at a huge disadvantage in that there is very little synergy that can be developed there. It is not as though a song can be so huge in the Cayman market that it then gets a buzz in Jamaica.”

“The buzz in Cayman doesn’t do much for an artist anywhere else because there is no “collective” buzz. The market is fractional and fragmented because of the transient nature of the Islands working population, whom are mostly there interchangeably for short periods of time by nature.”

“Cayman is really a social experiment at the moment in its demography, the results of which will not be seen or known fully for many years to come. For musicians from the Cayman Islands to succeed, the best advice I have is to leave the Island as soon as possible for a place where you can develop the synergy and momentum needed to make the run up to larger markets. “

“Now that people realize that I am making progressive Reggae and that it is something to take very seriously, things are kicking in to a higher gear. But I am very committed and so I have always known it could only be a matter of time.”

His latest release is Feel For You.

You can keep up with Stuart Wilson on Facebook and take a listen on Soundcloud. His official website is here.