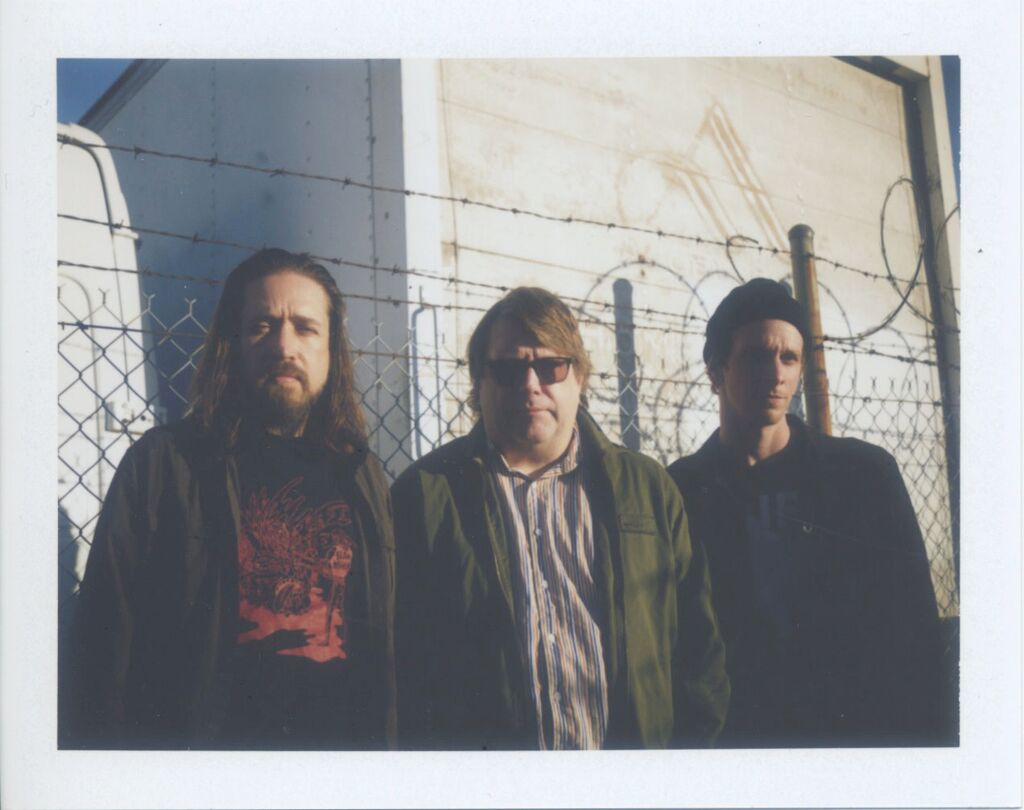 On their way to do a benefit concert for Black Lives Matter, I spoke to lead singer Robert Bly Moore about Sterile Jets new album release entitled No Gods No Loss, along with their new single and video, Fireside Drive. 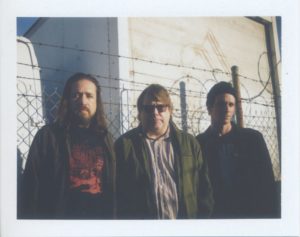 The members of this Californian noise rock band are: Robert on guitar and vocals, Wm B.ILL Partnoff on bass and vocals, and GS Bean on the drums. Their  music is similar to Shellac, Sonic Youth, and Melvins, and tends to be very LOUD, in a non specific genre kind of fashion. It has been described as a combination of noise, melody, romanticism, irony, love and anger…

Louder Than War: The Sterile Jets do a lot of gigs.

We do. We are kind of the opinion we don’t turn down the show. We don’t like to play in the same place a lot, but if the shelf sounds good will take it.

What is it you enjoy best when playing live?

What happens when you don’t have a good crowd?

You buck up and you play the show as good as you possibly could. That’s the thing, we just came back from a tour a couple weeks ago and, when you’re playing on a tour, you have shows that are not always the crowd that you want. Sometimes you play for five people. The thing is some of the shows that we played more on the end of playing for five people were some of the best crowds that we had. In terms of just having a few people there that really love what you’re doing turns it into… so yeah, you play your ass off regardless  of the crowd that you have.

Your music is really heavy music…

It is yeah…When we are writing music we tend to go heavier and louder, more often than quieter. I like changing of dynamics every once in a while, but it’s hard to do the way we write.

Do you sing lead?

I sing about half the songs. Bill our bass player shares vocal duties. Generally if you hear a real low, gravelly voice, that’s Bill.

You also have some unusually creative art work on your new album.

Oh thank you…our friend Johnny is a tattoo artist, as well as pen and ink drawing.

I want a tattoo from him.

I have 2 tattoos from him. He did this piece of flash which turned out to be the logo that we put on the record itself, it’s like the label, that said No Gods No Loss. It’s a flash that he gave to me, and I just love it so much. The more I looked at it I thought that’s a record label. We got to talking about it and thought it was the perfect album title. So we asked him to do the cover art for the record as well. We didn’t tell him anything but the name of it, come up with something. He spent about 3-4 weeks and came back to us. I had no idea what he was doing. Absolutely none. He handed me that and my jaw dropped. I thought it was incredible. It was exactly what I was hoping he would do, in terms of just something really weird, and just amazing. It’s definitely grab your attention.

Who thought of the name Sterile Jets?

That came from Bill. Bill used to live in San Francisco. At the time I think he was in his 20s and he was drinking pretty heavily. He had an older room mate who told him with the amount that he would drink he really needed to be taking better care of his body, taking vitamins and stuff. Bill didn’t want to spend the money on the vitamins. So they went down to the Tenderloin district where there was a free clinic, and you can get vitamins there. The free clinic also had a needle exchange. They were sitting there waiting and this older black gentleman walked in. There was no one at the needle exchange. He just yelled out, “What’s a brother gotta do to get a sterile jet in this place”? Bill liked ‘Sterile Jet’ and thought it was a band name.

I’m almost afraid to ask, but what inspires your music?

A lot of different things. When you talking about the music itself, we generally write together, all three of us. Maybe I’ll come up with an idea for a riff, or Matt will come up with a drumbeat and bring it to the band. Everything pretty much evolves out of jam sessions. We will free- form jam on an idea, out of that comes one or two really good ideas. As far as the inspiration for the lyrics, that’s all over the place. Bill and I are constantly writing down weird things that happen, or weird things that are going on in the world or in our lives, or whatever. The lyrics just come from what fits the music we have. We have sheets and sheets of the lyrics. One thing that makes it very interesting is that whether it is Bill’s lyric or my lyric, doesn’t have any outcome on who sings it. So quite often we are singing songs that the other person wrote.

Hopefully still alive. No, I think of that more for Bill than myself…

Yeah… I hope that we’re going to be playing all over the world, but I don’t have any inflated dreams that our music is somehow going to break mainstream. That’s never gonna happen. I’m totally OK with it. I see that we could fit a niche in the way that some of the bands that we love like Shellac, the Melvins, they are touring the world and they are releasing music and making somewhat of a living with it. From what I hear Steve Albini still supplements his income with poker winnings.

We really need to work on our poker.

You guys sound like you have fun in any case, especially Bill.

Especially Bill, yes. Going on tour and all the people that we  meet out on the road, those are the type of things that make it just so fun and so worthwhile. I mean obviously we’re in it to make music, that’s the first thing. We take our music really seriously. But, it’s so much fun being in a band. I love it!

What would you want to tell your followers?

Wow, that’s a really good question. Maybe we need to bring Bill in on this… I feel like in the past musicians and artists were put up on a pedestal. I don’t have a big message for people who are into our music. One thing that I would say is to be awake and be aware of what is going on in the world right now. In the past with our music, you wouldn’t by any means have us for a party band, but, we weren’t real serious in looking at our place in the world. That’s changing. That’s changing for us and I think that’s changing for our country in general, maybe the world in general. Shit is getting real. It’s getting scary. We live in Long Beach which is one of the most diverse cities in the country. I see people being negatively impacted, lives being changed for the worse, by policies that are coming out of Washington. By politicians who are leading us into really dark, really ugly places.

So tell me, did Bill vote for Trump….kidding…

No, no, there is not a single ounce of support for Trump in this band. I feel as an American it’s our first duty to apologize for him. It’s so embarrassing.

I write for a gay magazine in New York, so I’m always double apologizing.

I consider myself pan sexual, but I’m also a white guy, and a white guy has a lot of privileges in this country. I feel like as a white guy I need to stand up for people who don’t have the same privileges.