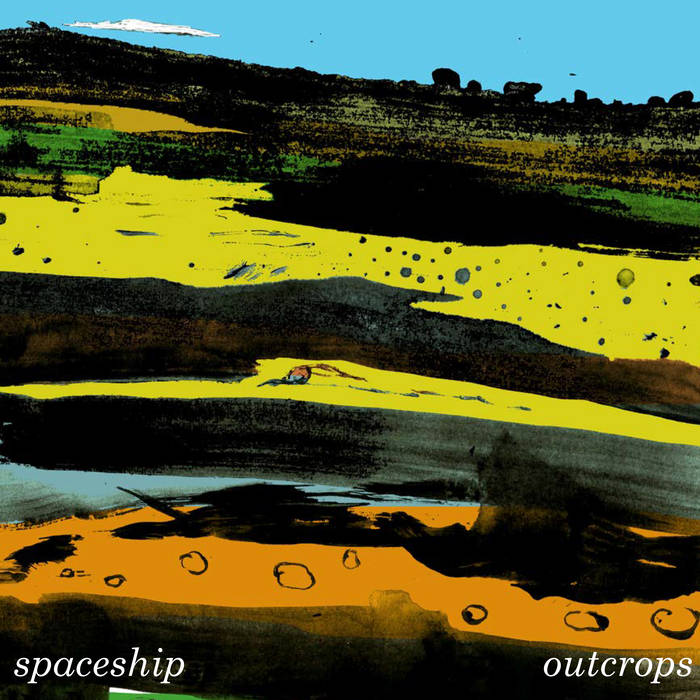 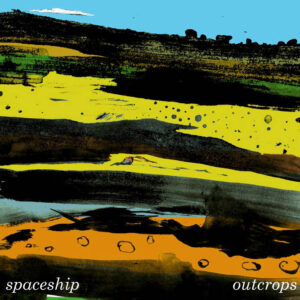 Perhaps you have discovered previous releases on a variety of small DIY labels as well as his own beautifully crafted editions?

Where you have or not his debut LP, Outcrops, is really something to celebrate.

It’s the first release in what could be termed as pschogeology – a music based on strata’s as well as longitude and latitude.

I caught up with Mark to learn more about his process and approach to creating this beautiful and intriguing new work.

The album is available to order now from here

Can you describe the journey of discovery you went on that first day you left the house and walked up to the Outcrop and looked out and listened?

It probably began before that even. We’d been living on the edge of Epping Forest, on the London Essex border for about ten years and we were thinking of moving away.

I went to visit my parents in Blackpool and my Dad and I went for a walk up in the Bowland Fells over in Lancashire. It was a miserable, wet, cold day and I remember thinking that this was what I wanted, it’s what I’d been missing. I’d been too long in the warm, rolling lowlands and realised how much I was craving something more vertical.

When I first visited the outcrops where the record was made, I was still in temporary accommodation in Hebden Bridge while we sorted out our move to Todmorden. I got the bus up to Blackshaw Head and then walked down from Bridestones via Orchan Rocks. I was photographing and field recording for another project but I remember feeling my love of geology begin to return. I studied Geology for my degree but never did anything with it after I graduated and this was the first time I’d lived somewhere where rock outcropped at the surface. I suppose it was then that I began to think how I could adapt my practice to my new environment.

Was it a mixture of reasons, practical, exciting to you, random, for views into or out to the landscape?

When I was approached to make the record it was the first time for a while that I’d had to conceptualise it as a whole. The last few albums had come together as a result of compiling work I’d made over a period of time, or acting suddenly on an impulse. I had all sorts of ideas about travelling up to Cumbria to work on some of the lesser known stone circles up there, or doing some sort of survey down the whole of the River Calder but it all seemed a bit forced.

Then I looked out of the front window of our new house and saw Whirlaw Stones above us and realised I had this amazing landscape right outside the door. Exploring the area I found the four outcrops I recorded at. They’re all the same Millstone Grit, but the nature of their settings allowed me to ‘fit’ them to my idea of telling the story of the geological history of the valley. I started at Whirlaw, and that had to be the Millstone Grit. Orchan Rocks is a bit lower down the valley side and to get there from Whirlaw you’re traversing the softer mudstones that come between the layers of grit. Once you’re back up at Hawk Stones, you’re looking over the valley to where the coal measures outcrop. It made sense to focus on them from there. Finally, Bride Stones had to be the last piece as it has such amazing views up and down the valley and that valley was formed by the glacier which the track attempts to invoke.

So the locations were chosen as a practical route but the story also came together as I worked my way round, over a period of months, making the recordings.

Ha! Well, I’m not the only one working with concepts of deep time in their music, Richard Skelton springs to mind immediately, Drew Mullholland. As I said, I studied geology at university, but creatively I was more interested in prehistory and the monuments of the Neolithic and Bronze Age. My idea with this was that, if I was going to work in this valley for the foreseeable future, I had to start at the beginning. I didn’t want to have to go back because I’d missed something. That meant reconnecting with my geological knowledge. Every landscape starts with it’s geology. Each layer, at the surface or below ground, contributes to the appearance, the fertility, the habitability, the safety (or danger) of a place. So for a deep survey of the valley I had to start with the geology. I’m happy with psychogeology though , as is my friend Maxim Griffin, who providing the evocative geological art for the record.

Having quite a busy work life and, until recently, living in a small flat, always made having any sort of studio space a challenge. I came up with a technique of using the multi-track function on a Zoom portable recorded to layer drones that I played on iPad plugged into a portable speaker. This meant I could go out into the field, build a piece and then, once home, it would basically need EQing and mixing. In addition, this method meant I captured the ambient field recordings whilst I was at it. I’d often also take recorders (the woodwind type), chime bars and other small portable instruments to add to the texture.

With this record I made a decision to up the fidelity slightly, so I used the same basic techniques but recorded the sounds internally in the iPad and recorded separate tracks of field recordings add over. This meant I was no longer tied to four tracks and I had a bit more flexibility when fine tuning. I still did almost all of the recording out in the field (bar a few low drones added later) including the melodica, violin and plastic trombone that feature, but this time there was a little bit more work back at home to get everything just so.