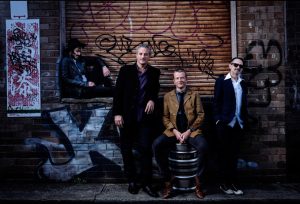 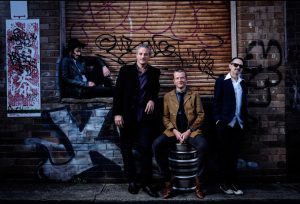 Vision and Faith is the newest release from Australian artists, Soul Messengers. They are one of the most booked bands in Sydney and surrounding areas having done 85 gigs since 2014. Their Soul, R&B, Funk sound is created by writer, guitarist and vocalist Richard Aljinovic, and performed by guitarist Simon Morel, drummer Dave Kirby, and bassist Hadi Ansell.

Richard understands the true feeling of soul along with his band who loves playing live. Influenced greatly by Albert King and  B.B. King, I spoke in depth with Richard and Simon directly from Sydney. Very proud of their new album, the two believe it’s the best work they have ever done.

Louder Than War: Soul Messengers songs are very emotional, where does your inspiration come from?

Rich: Just things you live with. Maybe the politics, things that just are here in the world these days. When we’re not there for each other. I wrote Don’t Let Them Tell You, about a friend of mine. She was going through a hard time and didn’t see anybody for a while. People didn’t understand her, and I saw that. So I wrote the song. So that is sort of how it goes, what I see coming through.

I understand that you guys love to sing live?

Simon: We played a gig last night, and we’ve got one tomorrow.

What do you enjoy most about playing live? I understand that you’re the most booked original band in Sydney.

Simon: The energy, what we get back from everybody. I love just playing with the guys. We worked hard on the three records that we put out. I really believe in the record. We definitely try hard to play shows. In Australia there are a lot of places where there are cover bands, and that kind of music. But as an original band, playing our own music, we are pretty well booked. We have played as many as 90 shows since 2014, which over here is a lot of shows. There are fewer places to play than in the US.

When are you coming to the US?

Simon: Lots of my favourite bands are from the states. Sharon Jones and the Dap-Kings, I love that new-old soul music. We’d love to come to the US, we’ve just got to sell some records first. We’ll save our pennies and then we’ll come over.

How long have you both been playing music?

Rich: I started at about 23. I finished University, and then I didn’t want to do what I was doing at the University so I ended up buying a guitar and started playing music. It’s been on and off for about 20 years. Being sick actually stopped me from doing it for about 10 years. Then I started up again, so it’s been about 25 years.

Simon: I’ve been doing it all my life. I started playing guitar when I was six. My day job is I teach guitar. I played in a whole bunch of different bands, a sort of pop band in the 90s, rock bands… I lived in Germany for a while and played in a punk band. All sorts of stuff. I love all sorts of stuff, and it’s great to have been able to play all that stuff.

Who did you listen to on the radio when you were growing up?

Rich: When I was a kid the first tape I bought was Elvis. I played that until it warped and I couldn’t hear it anymore. I wasn’t a big fan of the 80’s, that type of music. The things that got me through were people like Ray Charles. Later on I started looking at all the blues players like Albert King. They are the ones that really got me playing. With Albert King, when I found his CD I had a good listen and decided that it was what I really loved, and that’s when I got myself a guitar and started playing and singing. That’s when I started thinking about writing music.

Simon: I’m originally from the UK. My mum is a massive music fan. She loved the Beatles, Rolling Stones, and every time Mick Jagger was on the TV, she loved him. You know she still has a thing for him, which is cool. So we listened to a lot of that in the house when I was growing up. I would listen to that in the car when I was being taken to soccer practice when I was a kid. I went to guitar lessons for a few years and that guy Dave, my music teacher, was pretty influential. He had played in bands in the 60s. He had played in a band that supported really cool R&B bands of the 60s, like The Who, and Small Faces, and Traffic, and band’s like that. He introduced me to them and that sort of music. At the same time I auditioned for a blues band when I was about 13 or 14. All of the other guys in the band where like really old guys. They will like in their 30s. So I just started learning that sort of stuff, like Albert King, and B.B. King, who is still my number one favourite guy. I remember one of the first really great live shows I went to see was B.B. King. Just the power he had on the band… He had this enormous band, a 12 piece band. He controlled the dynamic without even looking at them. I remember being 17 or 18 and seeing that and wondering how he was doing that. It was just an incredible experience when I was still pretty young. So I love the blues sort of thing then, and I loved all the 90s bands particularly in the UK. Then I moved to Australia in 2000, and over here in Australia it’s a pretty rock oriented country. So there are a lot of Australian rock bands which are pretty well-known here but which aren’t that well known overseas. So over the last 15 years I’ve enjoyed the Dap-Kings, and Sharon Jones. They were such an amazing band.

Do either one of you have a favourite song on the new Soul Messengers album?

Simon: That’s easy for me, Don’t Let Them Tell You. It’s a ballad that Richie wrote, and he was just explaining the story. I didn’t know that story until he told you two seconds ago. He’s very on the down low when talking about what his songs actually mean. He likes to have people experience them for themselves. But I love it. I just think the lyric is absolutely beautiful, I love what the other guys in the band have brought to this song. Every time we play it, it doesn’t matter how many pieces in the band we have, it’s a great song and it always really goes down. I think it’s a remarkably great song.

Rich: I keep changing with my favourite song. I love Don’t Let Them Tell You. I always write songs and I don’t think about what they are about. People are going through stuff in their lives, and there’s always a different way to look at them. When I write I always write not to tell people what to think, but I put things out there without thinking about things. So that’s why it keeps changing. When I heard the end result of the CD, mixed by Sam Teskey, I really liked it. So yeah, it keeps changing.

Simon: The lead single from the album is Whiplash, I don’t know because I didn’t write the song, but my vibe on the song is that the world keeps going faster and faster. You just don’t really have time for the things that are genuinely important. Sometimes you should just take a moment and really enjoy life because if you’re rushing from one thing to the next thing and try to fit all the stuff in, your life is going to go by. Just being there with people is actually the things that you remember, not the rushing around. The world is spinning, spinning, spinning and you’ve got to take the time to slow down a bit. So that’s the lead single and I love that song as well.

All words by Eileen Shapiro. More o Eileen’s writing can be found in her author’s archive.