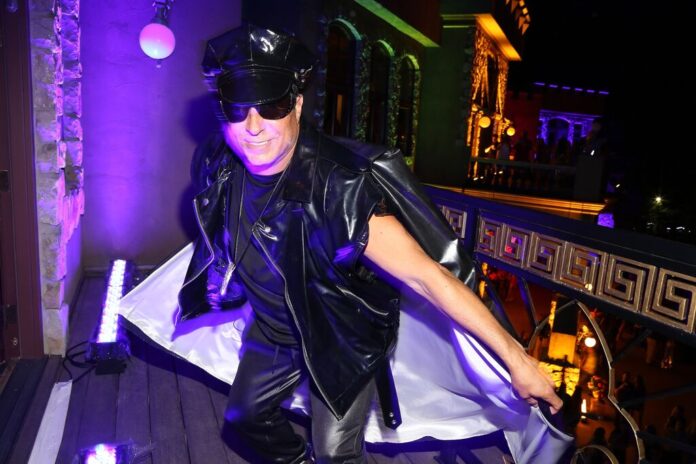 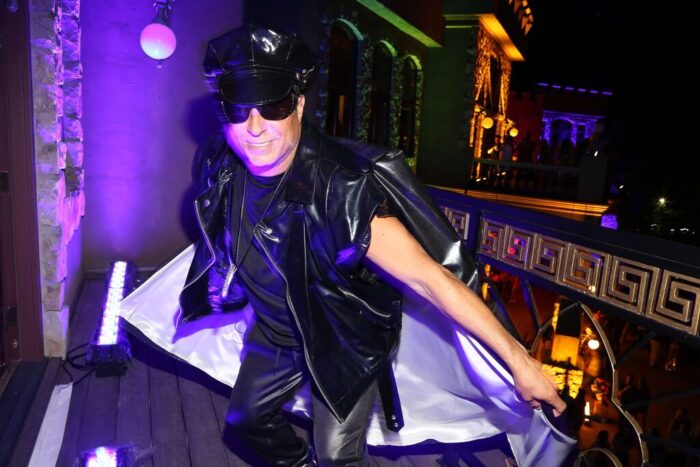 Banker turned electro- pop, glam rock singer and song writer has recently released a new music MVD entitled “SIR IVAN. I am Peaceman”. He is known best for his covers & remixes of songs relating to “Peace” from the 60’s and 70’s, as well as his own original anthem, “Kiss All the Bullies Goodbye”, featuring Taylor Dayne.

Also known for his decadent and extravagant parties at his rainbow lit “Castle” in the Hamptons, of Long Island where he performs on stage for 600 guests at a time.  His huge celebrations help raise money for his self-created “Peaceman Foundation” which battles hatred, violence and post-traumatic stress disorder.

His passion for music has led this cape wearing, pop artist to write the lyrics to his soon to be recorded release “I am Peaceman”.

I visited the Acropolis on a dismal rainy evening and upon entering the powerful gates that guard the Castle, the darkness was lifted and exchanged with sparkling stardust replacing God’s tears.  Sir Ivan greeted me with a hug, adorned in an enchanting black shirt and tiger striped pants, portraying the essence of a true glam rock star.

Louder Than War:  The tracks on your new MVD stem mostly from the songs of the 60’s and relate to issues of “Peace”.  They are remixed in a very electro pop, glam rock, house genre.  What influenced your song choices, such as that of “Imagine”, “San Francisco”, “Live for Today”, “Here comes the Sun”…?

Sir Ivan: Why I chose the 60’s… the back story of my father having been an Auschwitz survivor and having lost 59 relatives during the Holocaust simply because they were Jewish, left me with that sensitivity for all minorities, all oppressed people, and those that are not receiving justice, fairness and kindness.

So I attended your last Studio 54, Village People themed party along with special guest cowboy, Village Person Randy Jones, and I have to say your entrance into the party on the monstrous motorcycle that you rode through the inside of your house and up to the performance stage was epic.

Sir Ivan: That’s part of the artist in me, the creative part of my psyche. I kept my entrance undercover.  I told no one. Not friends, not lovers, not family… no one… not even my security, which you’re supposed to tell in advance, especially when you plan to ride something that weighs thousands of pounds through your house.  I’m not really a biker. I was just dressed like a biker because it’s the costume I chose as one of the Village People.  So I attached a black patent leather “peace” cape to my leather jacket and then realized that there was a danger involved.  The cape could get caught in the spokes of the wheels, or the engine… so I had my driver run after the bike, this giant chopper practically spitting flames, holding onto the corners of my cape so that we wouldn’t wind up on the gravel bleeding.

Then where did you go?  It certainly wasn’t to the YMCA.

Sir Ivan: So we made it from the front of the Castle, over the drawbridge, over the moat without security to the back of the Castle.  There were just a few of my own men trying to part a crowd of over 600 people who were moving out of the way right and left so as not to get run over.  Then there was the part that required, “I’m going to give them something to talk about”.  I drove the bike through the French doors, straight through the crowd.  I had to get to that stage and perform “Kiss All the Bullies Goodbye”.

You know though, I wish you were more famous.

Sir Ivan: You and me both!

You have a good sound, even a good voice.

Sir Ivan: In the recording studio with iTune technologies and autotune, with fancy gimmickry the biggest stars in the world all do it, and anyone who denies it is a liar.  That’s why they’re silly to keep it a secret, because there is no shame to it.  It’s not just the voice; it’s the body that goes with the voice.  It’s the expression, the emotion, the face of the artist that is telling a story.  So if you have the same impact, it doesn’t matter if you’re lip syncing, it doesn’t matter if its auto tuned in a recording studio… You’re putting on a show.  So you don’t want to call me an opera singer, so don’t call me an opera singer, even though I am classically trained… call me a performing artist… you can call me whatever you want.  But if you’re entertaining people and you’re getting a message across and you’re reaching them, and you could make people laugh, and you can make people cry and you can do some good- who cares?

You have a certain musical thing about you – “You bring it”.

Sir Ivan: I love the music.  I love putting on a show.

Did you write the lyrics to “Kiss All the Bullies Goodbye”?

Sir Ivan: Yes I did.  People worked on the melody.  I came up with the title.  The hook is the most important thing, as you know.  So I came up with that. The vast majority I wrote.  That took a while.  In the beginning people were saying, “Well you’re just doing covers, you don’t do anything original”. Well, that’s my gift… speaking, the language, communication, that’s one of my biggest talents, so song writing wasn’t a stretch.  The reason I had never done it, is because I thought when you’re a song writer, you have to write the melody and the words.  I learned late in the game that they are two separate talents.  Some do both but it’s rare.  It’s usually somebody is writing the melody who’s musically trained and plays an instrument sometimes and then there is somebody who’s like a poet, who has very creative ways of expression… I’m that one.  But that is what kept me from being a song writer.  I said “No, I don’t want to be one, and I can’t be one, I don’t have the skills”. Then I realized I could write a song in five seconds.

So then what’s next?

Sir Ivan: What’s next is the song that could do just what you said you hope gets done one day… for me to become more famous.  Short of having my own reality show, the alternative to that and becoming a household name is to have a pop record on the mainstream radio, the top radio charts, and that’s literally impossible for someone my age in a field that’s fueled by the young teenager.  But nonetheless that doesn’t stop me either.  That means that when you have a mainstream top 40 hit, it’s played on every clear I-Heart radio channel in every major city in the country, on a regular basis.  It’s got to be played every hour on the hour so that it becomes everyone’s favorite song and gets drilled into your brain.

And you have that song.

Sir Ivan: Yeah, I have something like that because that was my aim.  I have a new producer.  The producer’s name is Ali Dee.  Twenty years ago he produced “Crocodile Rock” for Elton John.  Recently he produced a record for an actress named Anna Hendrix who had a hit song called “Cups”.  That song “Cups” was in a major motion picture.  He put his whole team his best songwriters, singers, lyricists, everything and they came up with what they thought is the “Sir Ivan” song of the century.  Of course it will come with a video.  We will use the same video director, Erik White that we used for “Kiss All the Bullies Goodbye” because he did such a powerful job.  He’s huge and has worked with every major hip hop and rap star in the country, the fact that he even works with me, I’m honored.

And the name of the song?

Sir Ivan: The song is called, “I am Peaceman”… so it’s really about me!

To learn more about Sir Ivan visit his website at www.sirivan.com, he is on Facebook and Tweets as @sirivan

All words by Eileen Shapiro. You Can Read More from Eileen in her Louder Than War authors archive.