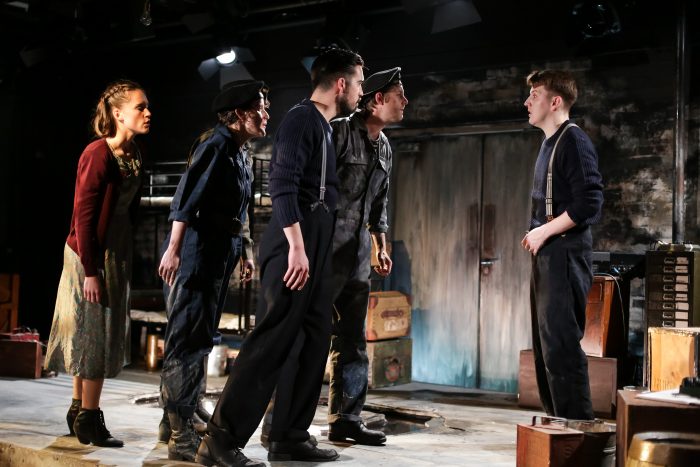 In a world that seems to be getting ever more insane by the day the spectre of war hangs over all of us, but Lizzie Nunnery’s new play Narvik takes us back to World War II when a people’s army signed up to fight Hitler and his hate filled ideology.

Narvik kicks off Manchester Based theatre company Box of Tricks 10th anniversary season telling the story of Scouser Jim who is one of those ordinary working class men thrown into extraordinary situations in the cauldron of war.

“The title refers to the Battle of Narvik which at the time was a decisive victory for Britain in World War Two when German ships were sunk,” says Lizzie. “Jim is the central character, and in his mind it represents a moment when he felt victorious, morally clear and one of the good guys.

“The rest of the war doesn’t allow him to feel like that so he always reaching back to that place high up in the Arctic Circle.”

Nunnery was inspired to write Narvik when she talked to her grandfather who joined the Royal Navy, and took part in hazardous convoys runs taking supplies through the Arctic ice fields to Russia dodging Nazi U-Boats on the way that sent more 100 Allied ships to the bottom of the ocean leaving thousands dead.

“The inspiration for the play started with me talking to my grandfather about his war, and he was in the Arctic Convoys, so it seems to be an unusual version of World War II that most people don’t know about, which feels like a good reason to bring it to the stage.

“He had a really sharp memory right to the end of his life and those memories were really powerful to him. He’d tell me positive things like being on the convoy that brought Crown Prince Olaf back to Oslo after he’d been hiding out in London and he was very proud of that. People rowed out from Olso in little boats as they were hungry and the British sailors were throwing down food to them.”

But as Nunnery dug deeper she found like many veterans of a generation that American historian Stephen Ambrose called ‘A Band of Brothers’ her grandfather was also carrying a much darker burden.

“He talked about the really difficult conditions like how they would have to constantly hose the decks down with boiling water to stop the whole ship freezing over and  clothes would freeze to their bodies. He told me about being on a ship that got hit and he was ordered to close hatches to the lower decks to stop the water coming up.

“But there were men down there who were trapped and drowned. but he could hear them banging on the pipes to be let out. and that stayed with him his whole life.

Nunnery has spent four years researching the testimonies of other unsung heroes like her grandfather carefully developing the work with Box of Tricks who specialise in developing the work of emerging writers. It began life as a ten minute piece but slowly has developed into a much longer piece that humanises those citizen soldiers and the people they met.

“It’s a love story and an action story where we start with Jim in the present day aged 90 falling in his basement, and he can’t get up so it becomes a scary life and death situation,” notes Nunnery. “He becomes delirious where he goes back into his memories and difficult things from the war come back to him.

“He remembers Elsa, a Norwegian woman, he feel in love with before the war started and he spends the rest of the war trying to get back to her. But the war means things happen in unpredictable ways and he is really surprised by what he finds when he does get back.”

When you read any serious works on World War II you are struck by how men who were once dock workers or office clerks time and again pulled off feats of extraordinary courage but Narvik interrogates the price they paid for their sacrifices.

“They were all ordinary people so I was interested in the idea of heroism and how these men would sail around for months before they would have to act if they got hit by a U-Boat or attack another ship.

“When Hanna Tyrell-Pinder, the director, and I were doing the research we heard from lots of men who talked about the tremendous pressure they felt to be brave and their fear they might not be able to do it when the moment actually arrived. That informed our writing and got us away from war cliché.”

And if writing Narvik wasn’t enough Nunnery has a side-line as a singer/songwriter so also penned the tunes that add texture to Narvik’s emotionally demanding narrative.

“I wrote all the lyrics and then I developed the music with Vidar Norheim and Marti Heslop and In the first run of the play at Liverpool Playhouse the three of us performed the music in the show . But in this run Vidar is joined by two new musicians including the folk Mazz O’Connor, who now sings the songs, and she is incredible.”

Narvik is at HOME Manchester from the 31 January to 4 February and then tours until 25 March 2017. For more information and where the tour is going visit www.boxoftrickstheatre.co.uk.