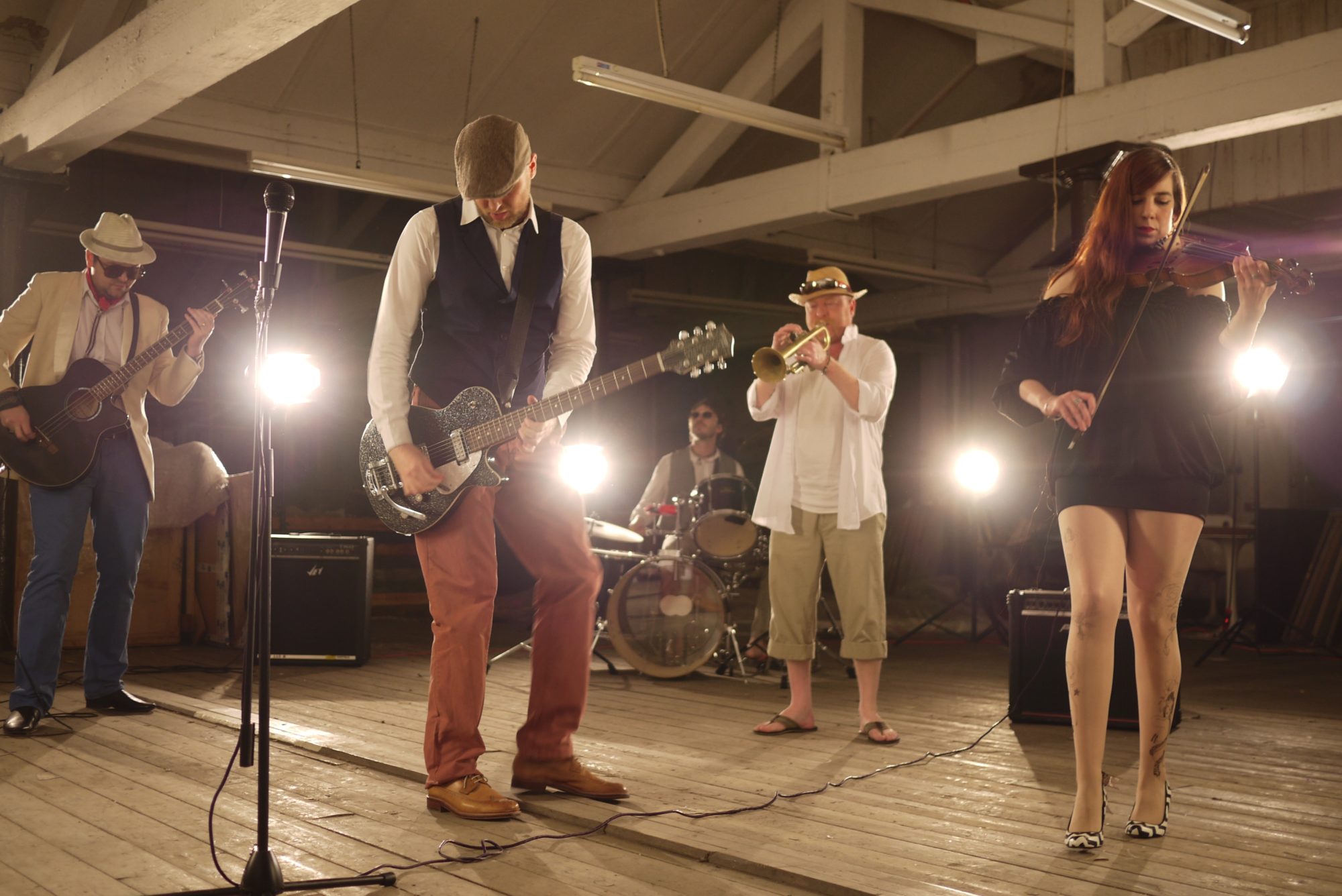 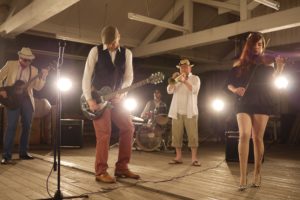 “That was fantastic. They were taking all these wonderful influences from The Good, The Bad and The Ugly- the horns, the violins – it was wonderful, and melodic and uplifting. He is actually a songwriter that can move people a lot…and what he has written there is quite rare…”- Peter Hook proclaimed in reference to the band Roja on BBC TV’s Best Part-Time Band.

There is no better way to describe, Roja. Their single The Evil Stands High, is a political reality, so relevant that’s it’s scary, and performed so well that it’s addicting. Here’s the kicker, Roja is modern Mariachi band. Their sound is like none I’ve ever heard, yet one I want to hear more of…really there is nothing even similar to it out there.

Frontman, Liverpool born, Simon Bradshaw is oozing with talent and creativity. His band Includes: Chris Doherty on bass, Rachel Brewster, strings, Aron McGhee on drums, Claire Swift keys and cello, and Edwin Pink, bass. Together they maintain the Spaghetti Wester attitude, with a hint of Pink Floyd, Mariachi El Bronx, and Quentin Tarantino, fused together, creating a sound that is enormously powerful and methodically habit forming.

I had the complete pleasure of speaking with Simon Bradshaw, a teacher by day, a dad by night, and a musician and lyrical genus all the rest of the time.

Louder Than War: I love your song, The Evil Stands High, I just can’t get enough of it! And the fact that you’re a modern Mariachi band, how different.

I love when people say things like that. We’ve been doing this so long. We’ve had our ups and downs and everything in between. It’s exciting. I’ve been plugging away at it for awhile, this thing is probably as contrived as I’ve ever been. The bass player, the unofficial style guru, of the band, he just went: “Mariachi”…I’ve always had a thing for it. It was research that led me into it. I loved Tarantino Soundtracks, and that Spaghetti Western thing. I wanted to try and do it.

Yeah man, thank you. Everybody is ” yeah man, it’s just him doing that”. I wanted the album, big, over the top, bombastic. The album is done pretty much. I was very pleased with the tracks and the song writing and all that, but I felt it needed a “this is what we do” and The Evil Stands High is the track we needed to get into it. It drags people in.

The title at first glance is a little scary, but tantalising at the same time. What was your inspiration for it?

The title itself. It was written after the last general election.

Well were you in or out?

I was very much in. The lyrics were written way before then. The track has come out now, again, because it’s much more relevant. The evil rising to the top, no matter what, you’re seeing it on your own Facebook feed. That’s kind of what it’s about.

On the TV program, Best Part-Time Band, you were praised by Peter Hook. How did that feel?

Omg, it was too much. Manchester is not that far away from Liverpool. We share a lot of heritage, and a lot of rivalry.

I’ve always really admired Joy Division when I was growing up. So yeah, then he was in my house. More specifically, my mum’s  house. I’m here now with my mum as we speak. If someone recognizes me from that show, the first thing they say is, “isn’t your mum brilliant”. She’s super cool, and we rehearse in my mum’s bedroom. It doesn’t get any cooler.

So, he was in my house, and seeing us play. It was just an incredible feeling of pride that it was happening. Then when he liked it and he kind of just looked around, he just hung out in the rehearsal, listening to other tunes, and kind of just being around, you could tell from the body language of the camera crew that wasn’t what he was doing in general for the show.

We very much stayed in touch. He sends me links to stuff he’s done. He’s just great. He’s  witty, sardonic, interesting and genuine. He was really genuine about the TV program, wanting to give exposure for under the radar bands. Then he said this amazing quote. It was a lovely thing he said about my writing and moving people. Not many people have Peter Hook in their mum’s bedroom.

Yeah. He really did. In the final, spoiler, we didn’t win, he went by and saw me, he whispered in my ear, “tell your mother, I’m sorry”. She got a real kick out of having celebrities in her house. My mum and dad helped me for many years without me having any gainful employment or what looked like any future. Heavy support for what to them seemed to them as a “bizarre” life choice, because no one in my family is musical. This is heavy black sheep territory.

You’re also a teacher. That’s like a normal profession.

I’m old and all that now, I had to get like a real job. Me being a teacher is gorgeous, it’s fantastic. I’ve got a little girl now, I got married a few years ago. It’s all the grown-up stuff, boy it’s interesting how my music still found its way in the middle of the day. It’s really odd, I’ve got this write a song at playtime thing.

Do your students ever influence your songs?

God…never.  Kids of that age, if they see you in a car parked on a holiday, they can’t deal with it. It’s like, your teacher doesn’t have a life outside of that room where they tell you stuff. If they see you in a different context, their brains melt. The day that I put on the video for The Evil Stands High, with the BBC coming in to film me, and you’re going to be in it, like this is what I do on a weekend or when I was younger. I thought they were going to be excited, but they could not compute that Mr Bradshaw was that fellow singing. They didn’t even know that I played guitar or sang.

Eight or nine. I intend to be in band with my daughter. She has no real choice over this. I’m not sure how she’s going to feel about it, having a 60 year old dad in a band. Actually my wife is an opera singer. She’s a really beautiful trained singer, and I’m obviously this garage musician. What it’s resulting in, is our three-year-old child is really defiant. She loves Euro-pop. I don’t know how that happened.

How do you suppose that your personality reflects in your music?

I’ll filter it through my brain, I know where it’s come from, and what the influence was. It might not really sound like it, but in terms of Rojo, because it was such a leap to learn about that kind of music, lyrically I tried to be very, very honest. The great Mariachi song writers, we’re just about that honesty, and that passion. I thought that authentic as a bloke from Liverpool is, playing Mariachi, I could some how lyrically give it the soul of Mariachi. I think it’s this very personal, heartfelt, performance, that was the most I could defend it. I didn’t want anyone to accuse me of being a charlatan, in a genre I had no right to lock into. So the songs I’ve tried, oddly it’s the most contrived music, I would say these are probably the most honest songs I’ve written.

I have to be honest, when I first heard The Evil Stands High, I thought of Pink Floyd.

Really! Talk about iconic. I guess there was an attempt of a bigness of sound.

How do you get and keep a six piece band together? I know some bands that can’t manage to keep a duo together.

I can’t get rid of ’em. The drummer for one, I met him when we were kids. He lives his life like he’s Tommy Lee. We were in a band called Marlo in the late ’90s. We made a few records, subsequently it’s challenging to find people you can work with. Especially with a songwriter who has quite strong ideas about what I want. It takes time to build that relationship. Understanding what everyone’s going to do, the different roles. Although at the moment I’m working on a different project with some new people which is really lovely. There is something very easy about working with those guys. We love each other. It has been 20 years on and off. We know exactly what our jobs are, and we don’t really think too much about it, and it’s lovely to see each other, because it doesn’t have the same pressure and intensity when it was our career. Now we get together when we can. We live in different cities, and we’ve all got families and things. We just do what we do. Pretty much when I’ve written this song, I know what they’re going to do. Even if I haven’t written it I know what they’re going to do, and that’s lovely. We just kind of stuck together.

Is there any song or passage that never fails to evoke emotion?

The version of Hurt by Johnny Cash. The broken sound of his voice, and those lyrics will always make me feel very mortal. It’s very real, it’s a very visceral. I have to be in the right mood to bond, otherwise it will make me very tearful. Recently I’ve been listening to John Grant. He’s got a beautiful way of evoking emotion, whether it be because of his deliciously, twisted lyrical ideas, or just the fact that everything sounds a bit like a musical. If John Grant wrote a musical, wouldn’t it be amazing. The other thing that recently made me very emotional is the soundtrack to  Moana. I think that’s what being a dad does to you. I went to  see it with my very nearly three-year-old daughter, it was totally involuntary but when the big number comes in, which by the way pisses on Let It Go, the big number in Moana is massive. There’s my credibility, what’s left of it.

I have to disagree with you about Let It Go, by the way.

If that goes into print I’ll be backlashed for it.

I’m team Moana. Songs catch you, what’s going on I your life.

If you could say anything to your fans or followers, what would you say?

I’d probably tell him directly. You know what, it’s funny, I’m really enjoying things at the moment. It’s lovely when you have really positive results, and you don’t feel like you’re banging your head on a brick wall, but 18/20 years and six albums, and all these different things. But you know what, it’s a privilege to be noticed.