Home Music Reviews Americana Reviews Interview: The Shires – Alan Ewart has his faith in humanity in... 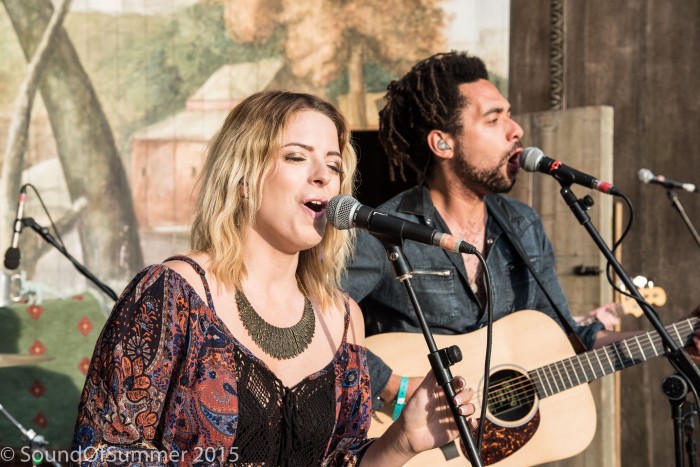 When you go to shows and festivals, review music and interview artists it is probably fair to say that you can become a bit cynical and world weary.  Then every now and then along comes someone who restores your faith in humanity in general and in the music industry in particular.  lan Ewart had just such an experience when he met The Shires at this years Larmer Tree Festival.

Crissie Rhodes and Ben Earle could be forgiven if they were a feeling a little smug.  They have become the first UK Country act to score a top 10 hit album, they are the first UK act to have been signed by Decca Nashville.  After just two years together as The Shires they have already played Nashville’s Grand Ole Opry and Country music legend Brad Paisley has offered to play on their album.  Bob Harris is a huge fan and they have even made BBC radio’s “A List.” It is fair to say that The Shires have plenty to be smug about if they were that way inclined.

I found the exact opposite to be the case when I sat down to talk to them in the press garden at the Larmer Tree Festival, shortly before their second night as the support for Sir Tom Jones.  Crissie and Ben are a real shot in the arm, as fresh and invigorating as a dip in the sparkling blue ocean on a hot and sultry afternoon.

Crissie admits that she was brought up on the country music of Patsy Cline and Charlie Pride before getting into the likes of Lee Anne Womack, LeAnne Rimes and Keith Urban.  Ben’s story is a little more complex, he has been writing songs for years, supported KT Tunstall on tour, had a recording contract but got dropped and was on the verge of giving it up “to get a proper job.”  Ben’s turning point was hearing Lady Antebellum‘s “Need You Now.”

Ben say’s that hearing that song made him realise that this was the sort of music he should be writing.  He loved the honesty, the story and the feel of the songs.  As a result he put a post on Facebook saying “there must be a country singer somewhere.”  Crissie responded and the two started to share music and ideas and eventually got together to write and perform.

It was immediately apparent that the couple had something special.  It is something that comes across when you talk to them.  Their voices compliment each other, the stories are country and yet the retain a home counties grounding.  Above all there is an overwhelming sense of honesty from The Shires.

The Shires are honest enough to admit they were delighted to see a little rain during their Tuesday evening performance because it added a little additional authenticity to “Nashville Grey Skies” and “Made In England.”  They also revealed that they felt a little upstaged by the peacock that landed on the top of the stage during their show and strutted around like it owned the place.

Onstage the chemistry between Crissie and Ben is palpable.  They are not a couple but they have an almost telepathic understanding.  They play off each other, and they are delighted to see that the audience is singing right along with them.  This is music with a real country feel, complete with steel guitar, but it is also full of hooks, pop melodies and sing-a-long choruses.  It is this mix both live and on disc that will ensure that the Shires popularity continues to grow on both sides of the Atlantic.  As Ben and Crissie put it they are “bringing British country music fans out of the closet.” 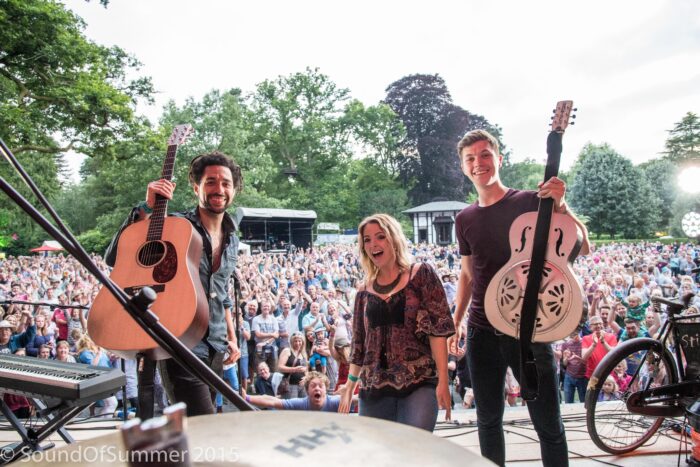 The Shires already have enough material for a second album written and they will doubtless be looking to return to Nashville to record it in due course.  Their first experience of recording at the home of country music was such a positive one.  The Shires were able to lay down 15 tracks in three days as the band played live.  They then went to Sweden for a week to lay down the vocal tracks and finalise the production.  Ben joked about the recording process saying that “it might not be like working down the mine, but it was pretty intense.”

As a final word I return to that honesty. Ben & Crissie admit that they have been blessed with how quickly things have taken off.  The level of success they have enjoyed to date is far beyond their wildest dreams.  It means that they have to reappraise their goals and they are already looking to conquer Europe.

I, for one, would not bet against it.  The Shires have it all, the looks, the sound, the chemistry, a great label and above all great songs.