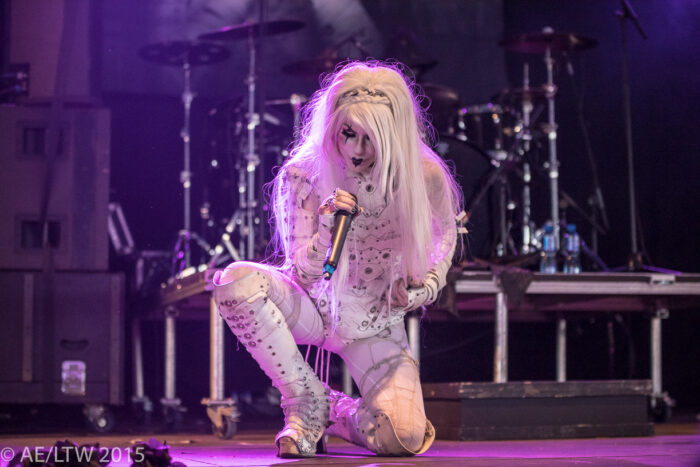 September Mourning is the alter ego of Emily Lazer.  September Mourning is much more than a band, it’s a story, a dark fantasy, dance, drama and performing art all rolled into one and set to music.  It needs to be seen to be understood properly and Alan Ewart went along to check out the show and afterwards had the chance to chat to September.

I was intrigued by September Mourning, she has been described as being like the love child of Marilyn Manson and Lady Gaga and to be fair the clothes, the make-up and the performance do lend themselves to that comparison.  The music also has elements of black or death metal about it.  I went shooting off to the Maverick stage at midday Sunday to photograph September only to find that half the photographers at the festival had realised that September would be great to photograph.

Early in the set it was clear that there were some technical problems onstage.  September later told me that the in ear monitors were not working and the stage monitors were too loud.  This caused her a few problems but that did not translate to the sound from the stage which was very good, just as it had been all weekend.

September Mourning is a fascinating stage presence, at times her movement reminded me of a young Kate Bush though the material is much darker and the performance utterly absorbing.  The visual impact and movement is just as important as the music.

Her appearance at Download is September Mourning’s first in the UK and she was clearly loving the experience.  She told me that she was “really excited to be at Download.  It’s an amazing experience.  Download is so much more than a music festival, there is this whole culture where people arrive Wednesday, camp out and sing 80’s songs together.  It is an incredible experience, a real gift.”

September explained that she had grown up immersed in all kinds of art from painting to drama to theatre and music and she wanted to find a way to combine all those elements into a project that would allow her to express herself in all of those different formats.

September Mourning is a character developed by Emily in conjunction with Marc Silvestri, she will be a comic book character when the next stage of the project comes out this autumn.  September is a human reaper hybrid who was spared by a reaper sent to steal her soul.  She was given eternal life and as a result decides that rather than steal people souls she wants to help humanity to decide its own fate.

This leads to a kind of world war between humans and reapers.  September Mournings songs and stage performance tell the story of the conflict.  The album “Melancholia” tells the story from a number of different perspectives.  September Mourning has a new album out later this year that continues to develop the storyline. 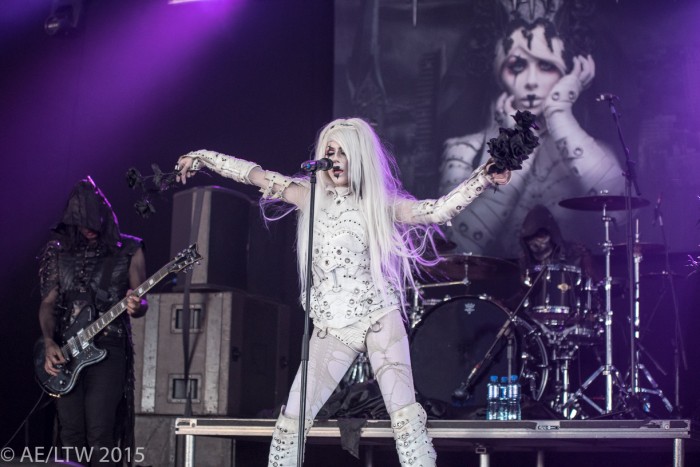 I asked September if the alter ego and make-up was a way of trying to ensure that she was judged for the music rather than on her gender or looks.  She told me that in fact “it was almost the opposite”.  She says, “what I do is so extreme that I put myself out there to be held up to ridicule and farce if that’s what people want to do.  In a way it is a study to see if people understand the expression of art.”

“Onstage you open yourself up, you take a risk.  People tend not to ridicule Robert Downey Jr. when he dresses up in a metal suit but when I open myself up like this I am prepared for the arrows to be fired if thats what people want to do.    I just ask people to think before they open their mouths to ridicule others.  I hate bullying and what I do is a way of expressing my art.”

September explains that “the best performances transport you to another world and let you forget about the issues in your life for a while.  Thats what I want this to be.  I want to take people into a story, to come into my world for a while.  It’s theatrical with a purpose.”

September Mourning are off back to the USA but they hope to be back on tour in the UK when the new album launches.

I found September Mourning to be absolutely fascinating both on and off stage, she is engaging, artistic and above all thought provoking.  Of course you can simply enjoy the music and the spectacle onstage but there is so much more to explore if you take the time and trouble to look beyond the obvious and superficial.  There is also a massive amount of scope for the project to develop both musically and visually.  I could see September Mourning developing into a full blown death metal rock opera.

I will watch this one with interest in the coming months and years.

September Mourning is on the internet here.  She is on Facebook and tweets as @SeptmbrMourning