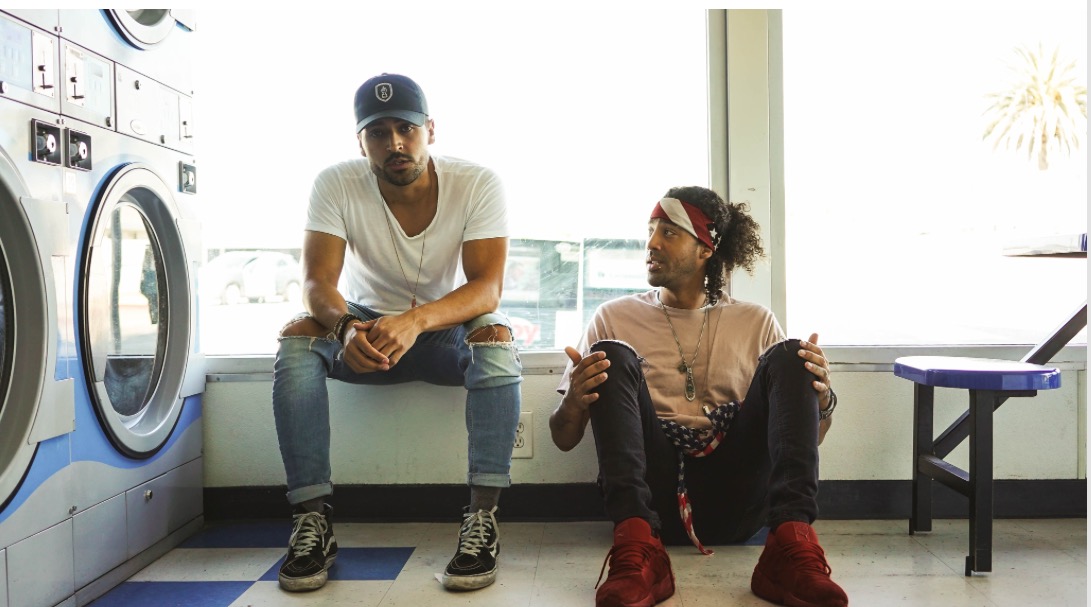 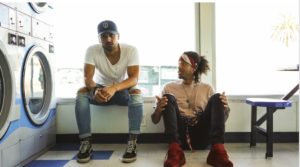 American Muscle, is the latest track, just released by Los Angeles based duo, 1 AMVRKA, pronounced One America. The EP is out on WLDFIRE/Capitol records but it is yet untitled and is set to be launched this summer. It follows their single Raised in the Wild. The duo’s mission is to, “unify an increasingly fragmented country, and break down barriers of all kinds”, through their music.

Their music is a unique fusion of hip hop, rock, country, and pop, with a hint of reggae, and focuses on the unappreciated working class. American Muscle was just recently featured on HBO’s sports series, Hard Knocks. The release is much more than a song, but rather an anthem.

The duo features singer/lyricist Jesse Scott and multi-instrumentalist, producer and song writer, Rudy Maya. Rudy was one of the most well spoken and easy going personalities that I have encountered, as he talked about his music, his background, the band’s history and future.

Louder Than War: Rudy, how many instruments can you play?

I play well? I probably play about five or six pretty fluently, but if you give me an instrument, and an afternoon, I’ll try to figure out something to do with it. I grew up with my father being a rock star so to speak, and I as well as my father, taught music lessons on the side. The music education was always there, ingrained in you, so….

Louder Than War: Who was your father?

My father is Roger Maya, and he was in a Spanish rock band. They were kind of a thing in the Spanish rock industry. I learned the ropes.

Louder Than War: So, tell me some history of 1 AMVRKA.

We met through a mutual friend about three years ago. We were both just writing and trying to catch a break. I’d been writing and producing on my own, he was trying to make it happen as an artist. We got together, and it was instant synergy. Writing in LA could be a tiring process. I was always trying to write a song in hopes that an artist will pick it up. We just got together, and we didn’t really plan on it, trying to make a group or a band or anything. We just wanted to write some songs. We really didn’t have any expectations, which is kind of rare in LA, because you always have a goal in mind. It was a very organic thing. “Let’s just write some songs that we believe in”, and we got together and it was obvious that we should keep it going. That’s what we’ve been doing ever since.

Louder Than War: I think that American Muscle is the coolest song ever. Who wrote and arranged it?

Thank you. Our writing process is pretty much the same throughout. We truly are a writing team. I will usually start with the hook myself, and I produce everything. I just kind of brainstorm some ideas, and I shoot them over to him. I think with that one I shot him a voice memo through the phone, with the hook and rough beat. He loved it and then he came over and we sat and wrote the verses together. That’s pretty much it. We really don’t write as much as most people probably would. We just write when it feels like we should. We just try to keep it as organic as we can, really. We don’t ever want to make it seem like a job or something. Especially the stuff we write about, we try to have a little purpose about it. We should never feel like it’s forced.

Louder Than War: What do you like most about playing live?

Finally having that  record realized. Being holed up in a studio or a basement, writing these records, you just never know if A: if someone’s ever going to hear it and B: if people are ever going to pay to see you and see it happen. Especially the songs like American Muscle, and Raised In The Wild, we’re proud of them! We’re proud of what we’re trying to talk about, what we are trying to convey. Seeing people respond to it, the live show is super dynamic, it’s fun, it’s loud. You can finally get to see people interact with you. Slowly people are starting to come out. You see people singing the hook along with you. It’s always a dream at a live show, it’s amazing.

Louder Than War: Growing up, aside from your dad, who were your influences and inspirations?

I have an older brother who is an incredible musician. He’s 10 years older than me so, he was actually touring and doing all of this amazing stuff when I was growing up. You try to aspire to be like your older brother. He was kind of the golden child, and I was the one that was too young to jam with the family. I was just four or five years old. I wanted to be my brother. Aside from that I grew up in a rock ‘n’ roll household. I liked everything from the Rolling Stones to the Eagles. Ironic as it may seem the band America was a big inspiration growing up. I am like an old rock ‘n’ roll soul. My father just ingrained all of that in me. Then naturally I grew up in the hip-hop generation, everything from Eminem to The Tribe Called Quest. So the family, classic rock ‘n’ roll bands and hip-hop inspired me. I think that was responsible for this mess.

Louder Than War: Where do you hope to be in 10 years?

That’s such a great question. In my experience, when you plan things they never really work out. I just literally try to write about whatever it is I’m doing right now. That tends to work out for me personally. I would love to see the group finally be on the stage it deserves to be on. Hopefully we will continue narrating and telling the stories that we are a part of and that we see every day. Hopefully we could keep doing this, and be a runaway train at some point, and just enjoy the ride.

Louder Than War: Yeah! Is there any one song or musical passage that never fails to stir some emotion?

The Eagles,  Hotel California. As a songwriter you hope that you can write a song like that one day. To me it’s my desert island song. I could listen to it all day. Melodically it’s perfect. It just frustrates me because it’s so good, and you don’t really know why. I could tell you what chords to use, I can tell you everything. It’s really not reinventing anything, it’s just that moment. They had that moment that day. Actually a few years ago I was recording in Miami at the Hit Factory, and I was actually recording in the room that they recorded Hotel California. I literally lost my mind. I don’t get starstruck because I grew up around it, my father worked with a lot of incredible people but I literally lost it. I was like “let me just touch the wall”, hopefully I can steal some of their mojo. It’s just such a great song. With the Internet, with Spotify and all, these kids, the new generation can have the opportunity at least to hear it, and discover it. Hopefully I can write a song like that one day.

Louder Than War: Do you plan to tour, maybe hit New York?

Right now we are doing the local rounds in Southern California. The idea is to go on tour this summer. In Brooklyn and Manhattan our numbers are Number one and number two for Spotify. I definitely look forward to going out to Brooklyn. Hopefully we will go make some noise out there. Definitely sooner than later for sure.

Louder Than War: Did you have a point in your life, a moment where the trajectory of your life changed?

I know  what truly changed the trajectory of my life was three years ago when I met Jesse. I personally had been writing and producing a lot of pop music, for some incredible people, like the Rihanna’s of the world, and Enrique Iglesias. All that super pop music, and then one day I woke up and decided that I want to write music that I want to hear over and over again. You kind of take these roles as a songwriter, writing these songs for someone else, and I realized one day that I had never written a song for me. I think that moment when I met Jesse, it was the same frustration for him. We decided that we would just write for us, songs we believe in, and write songs that we want to hear on the way home in our car, or at the gym when we’re working out. That’s what led to all of this. It’s the happiest that I have ever been making music. The response has been validating. It’s what we dream of when people say, “hey, I like it”. Furthermore getting to number three on the US viral chart, on Spotify and seven globally. It’s just crazy! Here we are.

Louder Than War: I like that story. Do you ever make mistakes playing live?

Oh yeah! I don’t even know if I should tell you this, every show it’s a new interesting wrinkle that we look forward to working out. Yes every show especially since we are brand-new, literally just starting. This set up we have live is a little ambitious. I’m trying to play drums and keyboard, trying to be ambitious but every show gets stronger and louder. The whole thing is to not let anyone know we’ve made a mistake, and I’ve kind of gone against that right now.

Louder Than War: So Rudy, you are a supper hero, what are your powers?

Powers, that’s an incredible question. My mother raised four kids. God bless her soul, I don’t know how she did it. My dad was always on tour, there was four of us, money was never really around, how she managed to put food in our mouths….I think she did a pretty good job raising me and supporting my wacky dreams. Whatever my mother’s power is I’ll take that.

Louder Than War: That is one of the best answers to that question ever. So you are a new addition to a crayon box, what color are you?

Clear. You put me next to some of the colors, it’s got to be the story of my life, adjust and adapt, I started making hip-hop, got into rock, country, soul, … You put me next to other talented people and hopefully I can keep up with them. I’ve been fortunate enough to keep getting callbacks. So clear, and just surround yourself with other incredible colors.

Louder Than War: If you could say anything at all to your fans, what would you say?