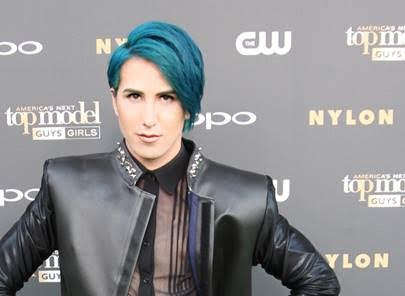 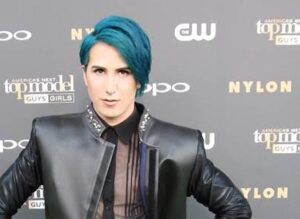 Emerging from the boy band era ready to explore the lost art of glam rock – Eileen Shapiro talks to Ricky Rebel ahead of New York Fashion Week and the release of his new single Star.

Unrestrained by convention or propriety, the Ziggy Stardust-fashioned, hi-energy, genre defiant, Glam Pop recording artist Ricky Rebel is slightly tainted with the whisper of darkness, has a story to tell.

The tale declares a happy ending as well as a new beginning. Emerging victoriously from the decline of the boy band era, when he was lead vocalist for the politically sabotaged group, “No Authority”, Ricky has reinvented himself with a vengeance.

Rebel was discovered by Michael Jackson, signed to Madonna’s record label and toured with Britney Spears. He is determined now to elaborate on the nearly lost artistry of “Glam Rock”.

Ricky Rebel is a truly dedicated artist, with a strong dance background, who actually trained for the U.S. Olympic Gymnastic team, as well. He is also an ongoing fashion contributor to U.S. Weekly.

Louder Than War: So, Ricky can you please describe your music, what you might compare it to, and your unique genre?

I like to coin a term when I describe my type of music. It’s called glam pop. It goes back to David Bowie, just an updated version of that.

What inspires you when you write your music?

When I write my music in my room I like to pretend I’m in front of thousands of people, and performing the song. I’ll write a track and then I’ll literally just stand up and sing the song out loud. If I have an emotional feeling for it I know it will work in an album.

I haven’t ever heard that before. It’s a very interesting concept when writing a song.

I have a very strong dance background so a lot of what I write centers around how I perform the music. I always want to express the emotional part of my music out to the audience.

What do you like most about the entertainment business?

I like meeting people like you for instance, people who are passionate about music, passionate about performers, people who love expression….I like traveling, I want to see the world really. I’m very excited about coming to New York. I feel that music gives me a chance to not only see the world but to experience different cultures, especially when I start doing European tours again.

Of course I also love producing a show, along with my Rebel Mafia, creating a show….I also love hiring musician to work on my albums, I like to be someone who helps other artists not give up on their own ambition, and give them a platform of their own to express themselves as well. That is really important to me, and that’s one of the best things about being in the music industry. And right now the independent artist have more power and control over their own work.

So, then you produce all your own stuff?

And you’ve been producing for a while correct?

Yeah. And it all starts at home in my room. I’ll read a book; books actually really inspire me.

I’m big into philosophy. I read a really good book called “Real Boys”. It’s a fantastic book explaining how we treat little boys different than little girls, and the impact it has on little boys when they grow up to be men.

The author coined the term “straight jacket”, that is when boys grow up they tend be emotionally crippled because they are not told that when they fall down it’s OK for them to cry, that it’s OK to feel vulnerable. We want to hide all of these emotions. Luckily I did not grow up with parents who tried to put me in a straitjacket.

So you have been in the record industry for a while now. What kind of changes have you seen?

There has been so much change in the record industry since I started in the ’90s. We basically did what the label said then, we were pretty much controlled musically. We were told what we were going to sing, what we were going to do. I always fought against that. I fought to be part of the album. I did get a couple of songs on the record, but I had to push, and fight to the death.

I think times have really changed now, I think that the power has shifted from the labels to the artist in a huge way. I think now you can make your own music. Now there is You Tube, Spotify and a bunch of others,  and you can find good music everywhere. I think that’s great.

Now I can explore all different types of music, EDM, Pop, Rock….because you don’t have the label telling you that it isn’t you. I do think that you have to work really hard now to stand out. Everything now is really so accessible, so I think you have to be really unique.

Well Ricky there is no doubt that you really stand out.

I can’t wait to go to New York and hopefully find some kindred spirit. Sometimes I feel like I’m called one of the weird ones, and I don’t feel weird at all. Like what I’m doing makes sense to me.

You seem to combine fashion with music, how did that come about?

People think I’m trying to get attention but really it all stems from being creative, it’s just my style, it’s not a weakness. It’s not an ego thing with me, it’s just a creative expression.

I want to inspire boys to be empowered man, to be both feminine and masculine. I don’t think make up should be gender specific either!

Ricky Rebel will be in New York City on September 17, during Fashion Week, combining his rock single “Star” , remixed by international DJs Hector Fonseca and Tommy Love while embracing his unique sense of charismatic and alluring dazzle.

All words by Eileen Shapiro. This is her first piece for Louder Than War