Home Blogs Interview: Q and A with Faris Badwan from Cat’s Eyes 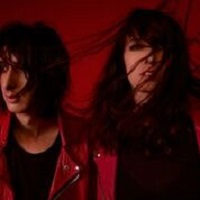 Cat’s Eyes are vocalist Faris Badwan and Italian-Canadian soprano and composer Rachel Zeffira who formed round their love of 1960s girl groups. They are promoting their well-received second album Treasure House at Howard Assembly Rooms in Leeds on Wednesday 2 November as part of the Beacons Metro urban festival.

Faras is probably best known for his work with The Horrors, so our man Paul Clarke caught up with him to ask about why Leeds United players might join in their Beacons Metro gig and how they came to play special concerts in two very unusual venues

You must be most unlikely act ever to play both the Vatican and Buckingham Palace…tell us how on earth you got those gigs?

Both instances involved a lot of deception and lying. Rachel – who is mainly to blame – convinced me that we should do our first ever show at the Vatican and I dismissed the idea as both impossible and stupid. She then set about proving me wrong by organising the whole thing. I can’t really tell you exactly how she did it. Buckingham Palace seemed to be the only place that would equal the Vatican so we figured out a way to play disguised as a Renaissance ensemble. The challenge with both gigs was to blend into the setting rather than to turn up and shock people, which is a lot more predictable.

You new album Treasure House is a mixed bag of influences from lush orchestral tracks to garage rock…how do you decide on your sound?

We write all the songs in their simplest form, with one instrument and vocals usually. The lyrics are fairly autobiographical – although not always in the literal sense. Then Rachel will add orchestral arrangements and I might treat those by running them through different effects..the songs kind of tell us what to do in a way. We get led by what seems best for each song.

The video for Drag is full of domestic violence making for pretty grim viewing…how tough was that to film?

It was a fair reflection of our relationship at the time. For me probably the hardest part was having to use a mop as I’d never done that before. It’s amazing to be able to experience new things through being in a band.

You’re playing the historic Howard Assembly Room in Leeds as part of part of Beacons Metro so what can people expect from that show?

We have a slightly different lineup for every show so it’s fairly unpredictable. Rachel used to date Massimo Cellino, who is now Leeds United chairman, so we might be able to get a few of the squad to appear on backing vocals.

You won a major film award for your work on Peter Strickland’s majestic The Duke of Burgundy so how did that come about and any plans for more soundtracks?

Peter heard our first record and asked us to score his film. He gave us total control and faith.. that whole thing was totally new to me and watching the film develop from an uncast script to the finished version was amazing. We will hopefully be doing another one soon. It’s totally different to making a record as you’re working with someone else’s work in mind which is kind of a weird idea. My favourite soundtracks quietly enhance a film rather than vie for your attention all the way through.

Cat’s Eyes play Howard Assembly Rooms on Wednesday 2 November and you can buy tickets from here . For more info check their Facebook page