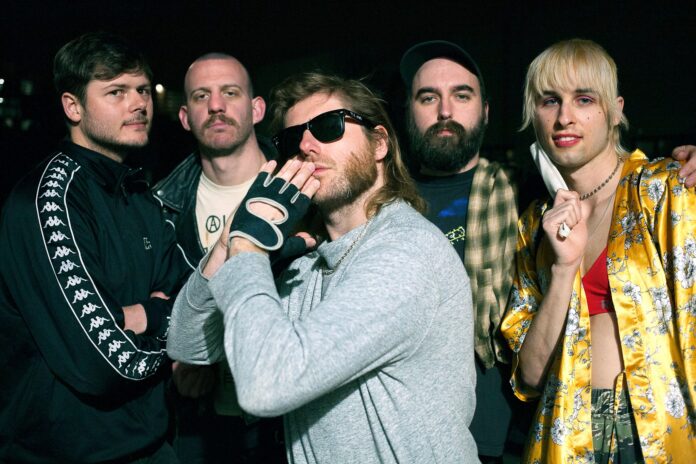 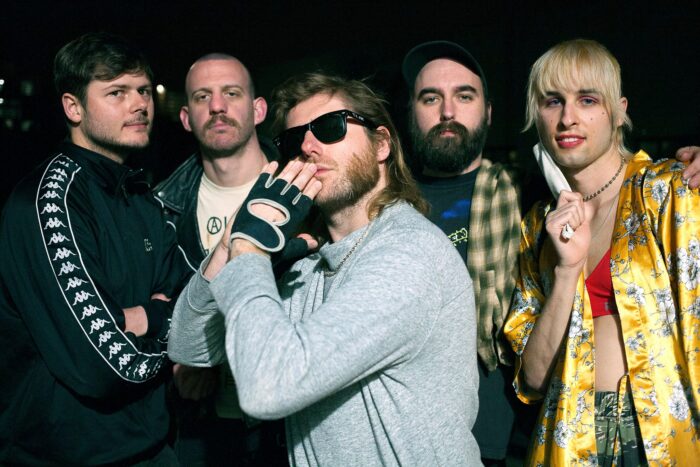 Private Function are Australia’s latest hard rocking rocket-fuelled party punks. In their home country, they’ve outsold Metallica (kind of), released an album with hidden party treats buried within the grooves and are taking the country by storm. Their latest album, Whose Line Is It Anyway?, debuted at #1 on ARIA’s Vinyl Albums chart, #2 on the Australian Albums chart and #9 on the Albums chart. Recently released in Europe on FOLC Records, they’re ready to take on more. We caught up with guitarist Joe Hansen.

LTW: Hi Joe! Firstly, congratulations on the album, it sounds fantastic. How did the writing and recording happen while we were locked down?

JH: “Thank you! We were lucky enough to have it all written and ready to go just before things got serious. We recorded everything in a couple of days, went to play a show in Perth the next day. When we got back everything had changed overnight and we went into a lockdown shortly after. Having something to release and promote and everything that goes with it definitely did a lot to help our sanity here. Melbourne had the most restrictive lockdown measures in Australia last year, I think there was about 110 days where we couldn’t leave the house for anything other than groceries, one hour of exercise in the local area or essential work. Thankfully things slowly improved and we’re now back playing shows again.”

LTW: We’re new to Private Function in the UK. Tell us more about how you formed and what your idea for the band was at the outset.

JH: “Our singer Chris and I originally got to know each other from touring in my former band Clowns and his other band Mesa Cosa in 2014. A couple of years later we had the idea of starting a band with him on vocals and me on guitar. We worked on some songs, recruited our bass player Joe and drummer Aidan and recorded a tape called Six Smokin’ Songs before we’d even played a show, mid-way through 2016. We did our first show in December of that year.

I don’t think we really had any firm plan for what the band would exactly be at the very onset of it, but it was always going to be based in the garagey punk sound that we all loved. Basically, we just wanted to make the kind of band that we would want to go and see play.”

LTW: It’s been an incredible success for you over in Australia and the latest Private Function album hit number one on the ARIA vinyl charts. How did it feel to outsell Metallica?

JH: “I made sure to download their new album illegally – as I do for all their records as a matter of principle – so I think their prospects of charting high were doomed from the start.”

LTW: What’s the deal with you slipping baggies of speed into earlier pressings that I’ve heard about?

JH: “We were trying to think of novelty cash-grab vinyl variants that people love, and Chris came up with the idea of pressing bags inside the record. We weren’t sure if it was possible, but we asked around and found someone here that was able to do it. Let’s just say it’s probably not a record you’d want to risk sending overseas.”

LTW: Your songs are very straight and to the point, no hidden messages and metaphors. Do you think that’s part of the appeal of the band and how you connect with people when playing live? Do the ideas flow straight out in rehearsal or is there more thought behind them?

JH: “We pretty much write the lyrics and vocal parts first for every song, so that’s what the hook and basis of the song is going to be from the get-go. I think blunt and literal lyrics about whatever the song is about is just something that works with the blunt and direct nature of the kind of punk rock or whatever it is that we play. If you’re 10 beers deep at a pub (or sober for that matter) nobody wants to be singing along to some crap that they have to think about and end up not even understanding anyway. Bands that use metaphors and subtext or whatever are cowards. Stop trying to be verbose and intellectual or whatever and get back to the rockin’.”

LTW: You’re well known for your great live shows. How has the return to playing live felt?

JH: “Live shows and touring are what we love the most and it’s great to be back in our element. It’s been great to finally be able to play songs off Whose Line that we weren’t able to do last year. We’re all seeing bands every other night of the week, so if we’re not playing a gig we’re probably at one.”

LTW: Was great to see you’d joined the FOLC family, for all Friends Of Los Chicos. How did that come about?

JH: “They emailed us with the offer of putting out our record in Europe and it all sounded good to us. Our friends in The Meanies have had their records put out by FOLC as well, so we figured if it was good enough for them it would be good enough for us. I love the power of the global community in supporting and sharing punk rock music and FOLC is an important part of that.”

LTW: Can you tell us three albums that have most influenced you and why? One local, one national, one international.

JH: “I’m sure everyone in the band would have wildly different answers to this question, but I’ll just do three that come to mind for me personally:

It’s a predictable and unsurprising answer for someone from Melbourne, but the level of influence and importance this record had on the sound of countless bands here is immeasurable. If you go out to The Tote or The Old Bar any night of the week there’s a good chance that you’ll see a band that sounds kind of like this. Influence aside, the album is perfectly written, performed and produced. The rawness, honesty and simplicity are all what I love most about garagey punk stuff, and ECSR do it as good as anyone.

Does this band or record even need an introduction? It’s Acca Dacca at their most raw and rocking. The band in this era were almost punk in a lot of ways musically. They took rock ‘n roll back to its raw form and cut out all of the crap that didn’t need to be there. It couldn’t be more different to Pink Floyd or Fleetwood Mac or whatever else was big at that time. Three chords played really loud with lyrics about drinking and rocking is all you need.

This record has it all and is legendary for a reason. It’s the perfect mix of hardcore punk, rock ‘n roll and heavy metal. If you’re into any style of those genres you will find something to like about this album. Ultimately, Poison Idea are probably the most punk band to ever exist and this is their finest hour.”

LTW: And, of course, do you have any plans to get over to the UK soon to play?

Still a bit too early now to have anything in stone, but we can’t wait to get over there. As soon as it’s safe to do so we will be there. UK promoters hit us up!

Whose Line Is It Anyway? is available now on FOLC Records. Read our full review of the album here.