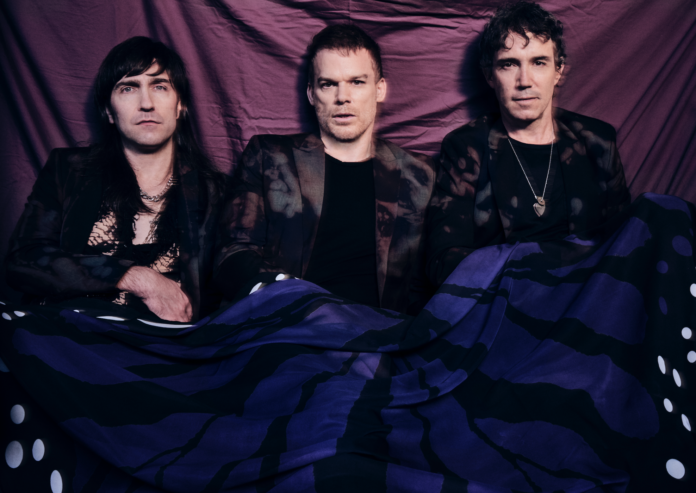 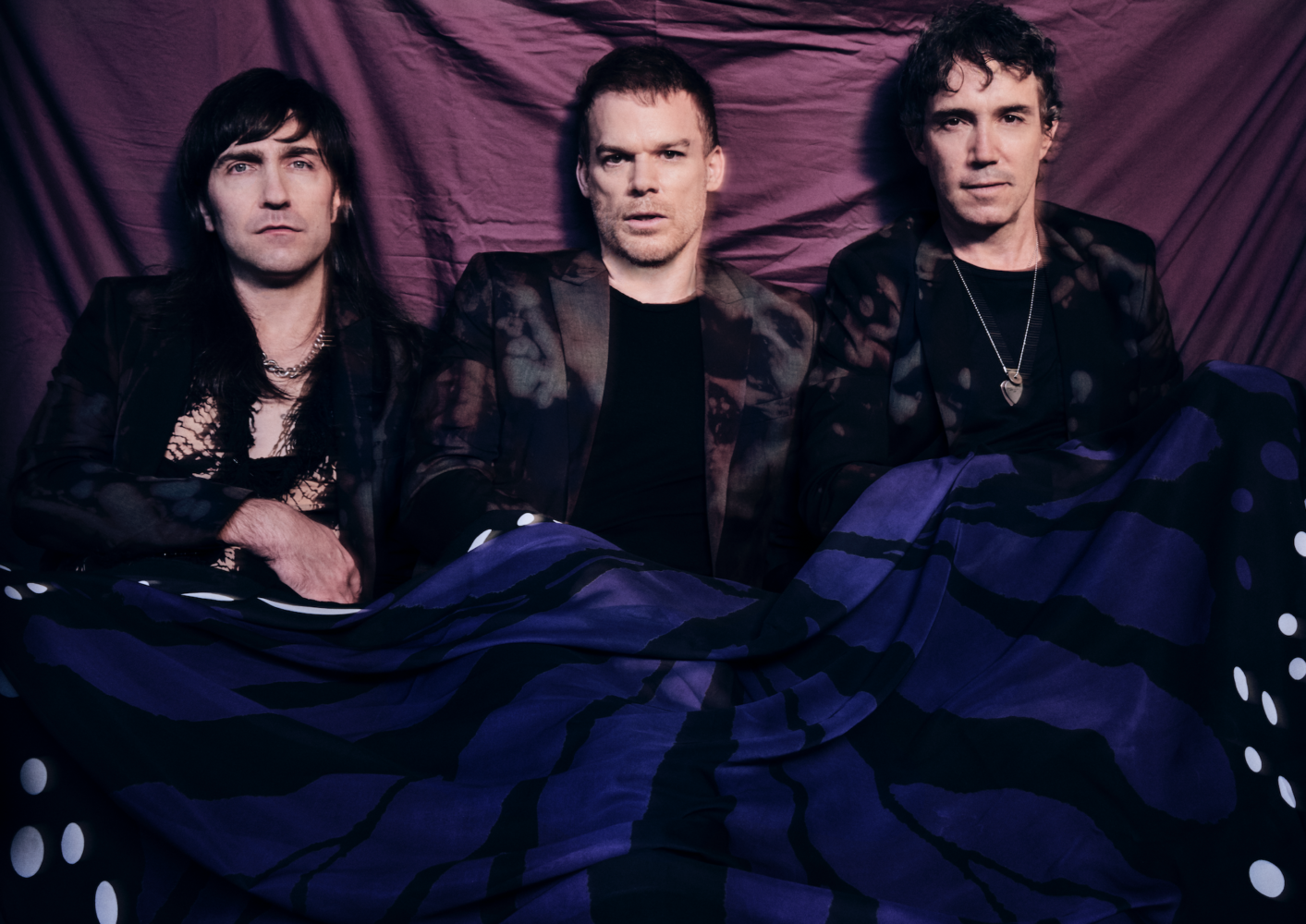 Interview: Princess Goes To The Butterfly Museum (Part One)

When respected drummer Peter Yanowitz and keyboardist Matt Katz-Bohen signed up to be part of the band for Broadway hit Hedwig and the Angry Inch they never dreamed they’d be forming Princess Goes To The Butterfly Museum with Dexter star Michael C. Hall.

Hall was playing the lead Hedwig Robinson along with Katz-Bohen, who has been part of Blondie since 2008, and Yanowitz who was in The Wallflowers. Hall has a good pedigree as a singer after being chosen by David Bowie to be the lead in the Broadway and West End production of Lazarus, loosely based on The Thin White Duke’s hit movie The Man who Fell To Earth.

The New York based trio are preparing to release their debut album, Thanks For Coming, and Paul Clarke caught up with Peter Yanowitz and Matt Katz-Bohen via Zoom to find out more.

Musical theatre doesn’t seem the most obvious place to form a rock and roll band?

Peter Yanowitz (PY): A lot of people know Michael from his television, and film work, but we actually met Michael doing a show on Broadway called Hedwig and the Angry Inch, which is a rock’n’roll musical. It’s a show about a band on stage in concert so it’s kind of just like a live concert on a Broadway stage. We’re all in costume playing these Eastern European rockers and Michael played the lead singer, Hedwig. I was the drummer and Matt was playing all the instruments bouncing around from keyboards to guitar to bass.

And you bonded with Michael in a slightly strange way?

PY: We also lived in Greenwich Village right near each other, so we’d share a ride home every night, and crank some loud heavy metal on the way home in the car. That spilled over into being social, having some drinks and enjoying just being friends.

You both went on the US Hedwig tour for eight months but you knew each other before that?

You started making instrumentals when you got off the tour but how did Micheal get involved?

PY: Michael heard it and was really intrigued by it. He just casually said hey, if you guys ever need anybody to sing on this, I would love to sing. I think his experience in Hedwig gave him a taste of what it was like to be in a band, and he wanted more.  Michael came in and sang on a song in the studio and we recorded it.  It was the first song we did was called Love American Style. He just kind of wrote some lyrics down on the subway ride to the studio and the song was born later that afternoon, We were like wow, this is really fucking cool and that’s been going on for about three and a half years now.

So as well as being a singer he writes the words so that’s a pretty decent two for one offer?

PY: He’s the kind of guy who really pisses you off because you know he’s a great actor, we knew he was a great singer then he comes in and is a fucking poet too. It’s like, ‘shit, dude, Jesus Really?’ He’s definitely a renaissance man and multi-talented. I think he’s doing something really unique, and I don’t know if he’s ever really written lyrics for songs before, but he has this way of writing poems. Sometimes we’ll do the normal pre chorus, verse, chorus sort of style, but Mike has a way of bending his poetry to the music.

There’s a whole range of influences on the record from stadium rock to Europop via Cold War Berlin.

Matt Katz-Bohen (MKB) :We definitely have synth 80s pop in our veins, we also have some 70s riff rock  and we all agree on Black Sabbath. The Stooges, Sabbath, Queens of the Stone Age, which is kind of running through it as well. Just that that throbbing sense of desert rock and roll, or, I guess, British Midlands heavy metal as well.

Matt, you are also a regular member of Blondie so has having a front row seat watching a great pop writer like Chris Stein helped with this band?

MKB: I can only hope, I’ve been writing, touring and collaborating with them for 12 years. He’s an amazing person, as well as being a songwriter, and guitar player. Watching him and Debbie write together as they do it is amazing. One of my favourite things about it is they’re not too precious about it. Like they accept inspiration when it comes and they don’t walk around like they’re the Dalai Lama.

PY: We’ve done some stuff remotely. we actually have some vocals on the record that ended up being recorded on Michael’s iPhone, he would sing into his phone and send me or Matt the voice message. We’d end up keeping them in as placeholders until we can get together. Some of those iPhone vocals actually ended up staying because when we got Mike in the studio, in front of a really good microphone, we might have gotten a better sounding vocal, but we didn’t get the right feel that he had on that original voice memo.

Why did you decide not to recruit a guitarist?

MJK: It started with me and Peter kind of jamming when we got back from the Hedwig national tour, and I’m primarily a keyboard player, so I would just go to a keyboard and he would go to drums. And we would just rock which sounds funny, like, yeah, I’m going to go to a keyboard and rock. But we tried to make it as heavy as possible, our heavy influences like Sabbath or a band like Nine Inch Nails, which you can hear on the album. So we were just exploring all the things that a keyboard can do, and at a certain point, we said we don’t really need guitars in order to create a full sonic landscape.

There’s a genuine European feel to many of the songs but on Airhead there’s a nod to the 80s poodle rockers.

PY: I grew up playing drums, having drum lessons to all that Boston stuff and Foreigner, and I’m a huge fan of Rush, Zeppelin and Sabbath too. But Boston’s never too far from my mind when we came up with that instrumental hook for the chorus, Mike came in the studio it was kind of a no brainer to go and I think the vocal is a serious nod to Boston. That chorus reminds me 100% of More Than A Feeling so I’m glad you picked that up.

MJK: That was just me tinkering with the keyboards. I had this Jupiter-6 synthesiser, and it has an arpeggiator on it, and I was just playing some chords. We love all that Soft Cell, Yazz stuff and the Giorgio Moroder feel of it all, too. The sequencer vibe is definitely I Feel Love Moroder, it’s obviously all over that.

You have made some really interesting videos but was it a bit intimidating working with a world class actor like Michael who is at the top of his game?

PY: We have a lot of fun making videos, we made four with this amazing director Samantha Scaffidi, and our ethos was just sort of like to go out and see what happens. And in that respect Mike’s a great leader as far as he’s got a lot of experience in front of the camera. He also has a great way of making everyone feel comfortable around him. Mike’s one of the most normal people I’ve ever met. He’s really normal in a way that you just feel comfortable around him immediately.

In the second part of our Princess Goes To The Butterfly Museum interview Michael C. Hall reflects on why he joined the band and fresh from the set what to expect when Dexter returns to our screen.