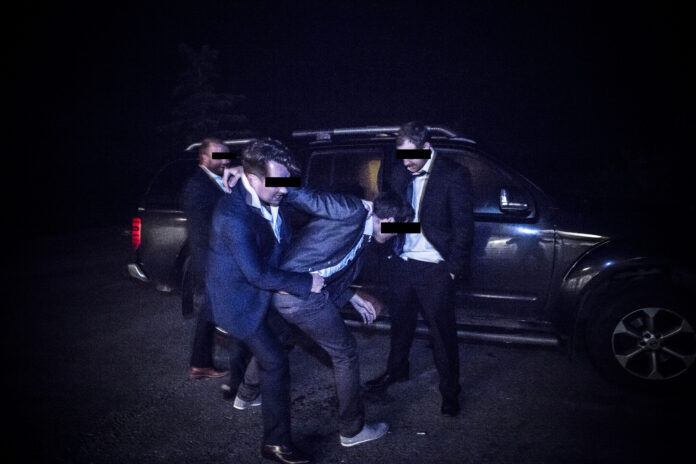 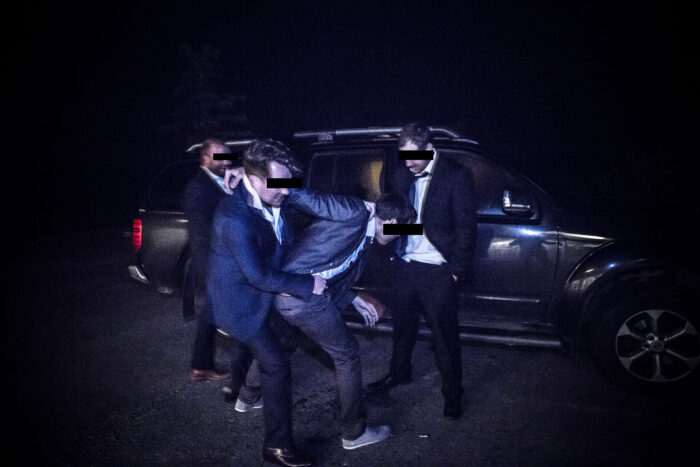 With his first post for Louder Than War, Ilia Rogatchevski catches up with The Pre New, ahead of the release of their second album, the cheekily titled The Male Eunuch.

The pop culture phenomenon that is the Pre New revealed itself to the present author when the latter was experiencing severe emotional uncertainty and creative destitution. This was a few years ago, but one still distinctly remembers the first time I, Rockstar started playing on a friend’s iPod. The ruthless energy and anarchic abandon that Stuart Boreman, Jim Fry and Co. compressed into a minute and forty-nine seconds of music echoed punk’s grating intimacy. A good way to win one’s attention, no doubt, but there was more to this band than first impressions. Discordant electronics and anti-pop melodies gyrated furiously with wry, observational lyrics about cheese, teenage terrorists and estate agents. This subversive attitude, coupled with precocious graphic design sensibilities, demonstrated that all was not lost. There was a future for pop music, after all.

Three years later, the Pre New are back, recharged and invigorated. Their new record, cheekily titled The Male Eunuch, is set for release on 11 May via 3LoopMusic. Described by Boreman as a “colour chart from hell”, their second long-player treads much the same territory as its predecessor, but considering how the alternative is a mandatory 20,000 capacity McBusted arena tour for all eternity, one cannot be criticised for making one’s allegiances clear. If anything, the Pre New have chosen to focus even more energy on cultural critique, utilising “Binary Digital Bankruptcy” in order to convert “Sonic Debris into the sound of summer”.  We fired off a few questions to the band in hope of finding out what motivates their agency.

Louder Than War: The band name comes from the Jeff Koons Handbook. He appears to me a disingenuous cynic, perhaps even a charlatan. Do you identify with Koons as an art world jester (making jokes at our expense) or is your association with the artist in question more complex?

Stuart Boreman: We love his ingenuity. We love cynics. We love charlatans. We love Jeff Koons. Can’t stomach jesters though.

Jim Fry: I love Jeff Koons as well, he helps keep the jesters at a safe distance. Vinny [Gibson] and I flew to New York to see his show last year. As you walked through the rooms (including the new and the pre new), it became an almost spiritual experience, more life affirming with every piece of work; inflatable dolphins trapped in deckchairs and life sized trashy ornaments. This feeling peaked when you were confronted with billboard-sized photographs of him shagging and licking out his wife on the rocks.

The cover for the Male Eunuch recycles the National Rail logo. It first appeared on Music for People Who Hate Themselves (2012). The image, whilst retaining its Pop Art loyalty, now echoes the days of early digital art and Windows 98 screen savers. Was this aesthetic decision an act of nostalgia on your part or an ironic symbol demarcating the future: the Pre New 2.0, so to speak?

SB: We commissioned the cover from Manchester artist Gary Andrew Clarke, who produced an oil painting of the design. It is already our favourite cover of the year. It looks fucking fantastic and even better in the flesh. Superb! We could and have talked all day about our use of reversing the backward National Rail Logo. Last time round the album was in the latest season of Ralph Lauren colours and now the colours are in Farrow & Ball. The box set (released May 11th) includes The Pre New paint chart with superbly named colours such as ‘Elephant Cock Grey’. We also decided to release the album on PowerPoint, so it’s a good fit.

Laurence Bray: Hopefully, somewhere in the country, there will be an employee preparing to leave his office job. On receiving his leaving card, whilst standing by a printer, drinking warm Prosecco and making false promises to “keep in touch” – they will be presented with a copy of The Male Eunuch.

JF: The album cover is one of the greatest things I have ever been involved in and it needs no explanation.

Suffice to say, when Mike Oldfield sees it he will be so jealous.

Lyrically, the Pre New stand out from their contemporaries (or whatever is current, for that matter). Your songs are laced with observational satire and dark humour worthy of a Hogarth print. What is the root cause for this aesthetic direction, as opposed to, say, an escapist, tried-and-tested route?

JF: I like the Hogarth reference in this question. Any group I have ever been in is like being in a Hogarth painting (or a war painting at the end of its life span). Loads of piss-heads shouting all at the same time.

LB: Escapism is a delusional waste of time. Facing up to what fascinates you, or sends you into deep despair, or makes you laugh out loud is much more informative and rewarding.

There seems to be an overwhelming amount of sonic vandalism on the new record, ‘MRI Classics’ is a fine example. Could it be said that the Pre New is turning ‘taking the piss’ into an art form, or do you see yourselves as serious subversive agents?

JF: Not sure about ‘sonic vandalism’. There’s a lot of noise on that particular track, but it’s kind of there for a reason.

Before you go into an MRI machine they ask you to fill out a form stating your religion and nationality. I figured this was in case something goes wrong and they have to bury you. If you write down ‘English’ they pump in loads of Enigma Variations and [Sir William] Elgar’s Land of Hope & Glory into the speakers. You have to wonder if they have a selection of appropriate tunes depending on what your postcode is. Does this mean you get to listen to Level 42 if you’re from the Isle of Man?

The Pre New don’t take the piss. We’re not a comedy act hiding behind a collective sense of humour and I don’t think it would be us that should decide if we are an ‘art form’; that’s for other people to attach to us. We just make pop music: the greatest art form of all.

One gets a sense of Bobby Conn/Genesis P-Orridge-style performance art antics on ‘Flaccid Astronaut’. Does performance play a significant role in how the band functions as a unit?

JF: ‘Flaccid Astronaut’ is one of our more democratic songs. We all get a go on it. New Stu [Wheldon] is from Canada and has never had the luxury of [experiencing] The Human League the first time around, so we did that tune to keep him happy. The words came quickly, after watching this genuine little man at the Crown Hotel in Cricklewood keep sending his regular sized mate to the bar. It’s also, like a lot of our songs, about the size of your penis.

LB: Artwork and live gigs are being boiled down to a much more simple operation these days, but hopefully a more direct one. Live [performance] should be a thrilling, loud and orgasmic experience for the people who come and see us. Like wanking in an automatic car wash on a Saturday night.

JF: Genesis P-Orridge (aka Neil Megson)… I don’t thinks so. Throbbing Gristle were the MRI without the classics. I remember being intrigued by the TG thing when I was young, but when you went to see them, it was a bit cosmic for me. It wasn’t that intimidating. In fact, they all came across as nice art teachers with an unhealthy hippy slant. There was no intimidation and no threat. They will probably put a voodoo sex curse on me now I’ve said that, ha ha!

I don’t know a lot about Bobby Conn, but what I’ve read about him sounds like a good laugh: the sort of bloke you’d want to meet on a long ferry crossing at the bar and get totally wasted with, and exchange details with, but never get in touch.

Would it be accurate to describe ‘Psychedelic Lies’ as a disorientating anthem to wrongness? Is the song a comment on the recent resurgence of psychedelic music and backward-looking laziness within the popular end of the cultural spectrum?

JF: I think disorientating anthem is great way to describe ‘Psychedelic Lies’… So, yes, that’s what it is: a ‘Disorienting Anthem’.

The song is more of a reference to the after effect of The Female Eunuch (Germaine Greer, 1970) and where we’ve all ended up now. I think they should keep copies of that book in Fitness First and LA Fitness gyms, and give them away with DVDs of Geordie Shore. You never know, someone might read a bit of it and go: ‘Blimey… What he fuck is going on?”.

Do you think that culture is afraid of looking forward? Is this fear problematic, even? Perhaps the 21st century will be defined by its technological innovations, rather than the creative heroics of its cultural vanguard?

SB: It’s easier, safer, quicker and more reassuring to look back, hence [nostalgia’s] invasive popularity. Technology is braver because of financial lust. When the hyenas smell cash they will head in that direction. Remorselessly, endlessly.

JF: I’m not sure if culture is afraid of looking forward, but I guess it’s all about recycling right now. Some of the greatest inventions are under our noses in the present, aren’t they? But they’re all packaged as tools to ‘bring us together’ and ‘share an experience’. Let’s hope the present won’t be just remembered as a generation that drank Prosecco out of jam jars.

Where does the Pre New fit in within this future/past dichotomy and what symbolic relevance, if any, does the the Mars bar contribute to your creative trajectory?

JF: I have to say that these are the most pretentious questions we have ever had and that is a compliment to whoever came up with them. Isn’t it brilliant that a few lyrics written when you’re pissed and a revised BR sign in Farrow & Ball can ignite questions like this? I think Louder than War should make up the answer to this one… print what you like.

The Pre New can be found online here: theprenew.com. They’re also on Facebook and tweet as @theprenew.

All words by Ilia Rogatchevski. This is Ilia’s first piece for Louder Than War. He tweets as @rogatchevski.