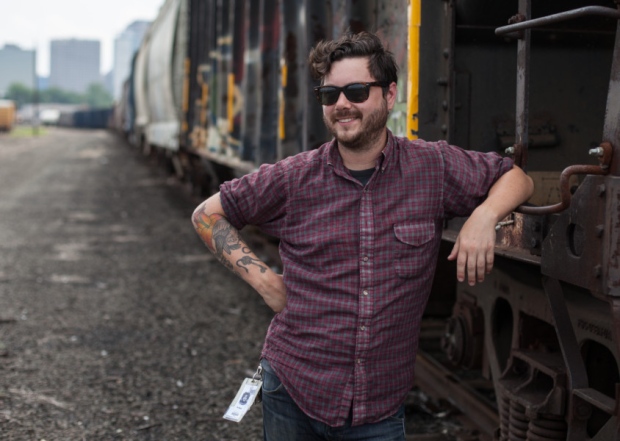 Though the idea of the singer/songwriter isn’t a new one, the refreshing thing about PJ Bond is he doesn’t pretend it is. Dave Beech caught up with him before he opened for Frank Turner in Manchester.

There’s something inherently romantic about the image of the lone musician, they who leave behind their home in order to live hand to mouth, gig to gig, sofa to sofa. Arguably it’s the sense of freedom such a life suggests, the almost-primal notion of experiencing, to a degree, the unknown and the idea of having nothing tying you down. Unfortunately for those of us living in the UK, it’s also a very American, or at the very least foreign, concept as well. And though Britain has its own quaint charm, it offers little in the way of sprawling open roads and endless horizons that lend themselves so well to the image of the lone troubadour. And perhaps that’s why we seem to welcome such musicians, when their journey inevitably brings them to Britain, with such open arms, a concept PJ Bond agrees with. “Over here I just generally feel very well taken care of…There’s not that many places that I can say without question ‘This is going to be an amazing show tonight.’ but there are places in Europe and the UK that I go and I’m excited and I turn up and see loads of friends, and people that have become friends over the years from being fans.”

Growing up in New Jersey before moving to North Carolina, and now residing in Philadelphia, PJ Bond is no stranger to a lifestyle of travel and almost-transience, especially after spending several years effectively homeless, playing to just about everyone and anyone who would listen. “I gave up my home in 2009 to travel as a singer/songwriter for what I thought was going to be a year straight and then go back to a more traditional touring style. But I ended up not having a full time home until last summer.” It’s this period of his life on which PJ muses on his latest album Where Were You, but not in the cliché way one might expect. “It would have been easy to write a bunch of songs with the common theme of the road and travel…[but] in that time, my nose was a little bit closer to the paper, I was noticing the way that travelling was effecting my relationships; helping me create new ones whilst destroying old ones. So rather than glorifying the travel, I was analysing the interactions.” This is something that’s evident in tracks like Broad Street or Neighbourhoods; both tracks bristling with a nostalgia and a relatability, something that’s forever been a prominent aspect of both Americana and the kind of honest folk Bond flirts with when performing solo.

“So the record I would say is a reflection of the things I was going through at the time, the people I was meeting, the positive things I wanted to celebrate and the hardships I was trying to make sense of.” he says of the album. Released on Xtra Mile back in May, it was PJ’s set at a showcase for that label that first caught the attention of Frank Turner, and the reason he supported him on his recent stint of small-venue shows, “It had been in the works for about four years” he continues“partially from writing, partially from recording. The process of recording started out very easy and then it got very complicated and then releasing the record took a lot longer because Xtra Mile weren’t involved from the beginning.” His admiration for the label that helped him release the record is clear. “I’m not in a position where major labels are throwing tons of money at me. Instead I’m working with a really cool indie label who’s very much built on trying to find people who want to hear your music but don’t know you exist…I think also the people who come to Frank’s shows,” he goes on to say “from what I’ve seen over the years and specifically on this tour, they’re really just big fans of music…so to have an artist like Frank ‘Hey, this guy’s songs are pretty good I want him to sing before I sing’, that’s huge to me.”

Unsurprisingly for a man so humbled by the opportunities his talents have afforded him, Bond is amicable and open from the moment we shake hands, sitting down on the floor of a service alley of Manchester’s Arndale Centre – anyone who ever saw Almost Famous assumed music journalism was glamorous, you’re wrong- something which again bleeds through in to his music. When asked about why he thought his music felt as relatable as it does, despite him living a life quite unlike the majority of other people’s, his answer seemed not only to summarise his music, but also his whole ethos and outlook on life. “A lot of people haven’t lived the life I’ve lived but that doesn’t mean to say they haven’t had these same experiences…I’m writing songs about things that I see or I hear or I feel, that are connected to people and feelings that I have. I think in the end whether you’re sitting in the office or playing to a stadium full of people, you still have relationships, moments of doubt and moments of celebration. The application may be different but the existence of them is still the same.”

So does PJ Bond consider himself to be the archetypal wandering musician? In short, probably not as much as you’d think. Having been settled in Philadelphia for about a year, it seems his musical vagrancy might be enjoying an indefinite hiatus. “I could tell you about the times I was vomiting or eating something crazy good and paint a very specific picture. But I’d rather just say right now the specific touring thing for me was the discovering of what it’s like to be in or from places I never even thought about. That’s something that makes me want to keep going back.” Though his postcode might be a little more permanent now, there’s still the spirit of the wanderer in PJ that says he might not just be done with the lifestyle just yet.