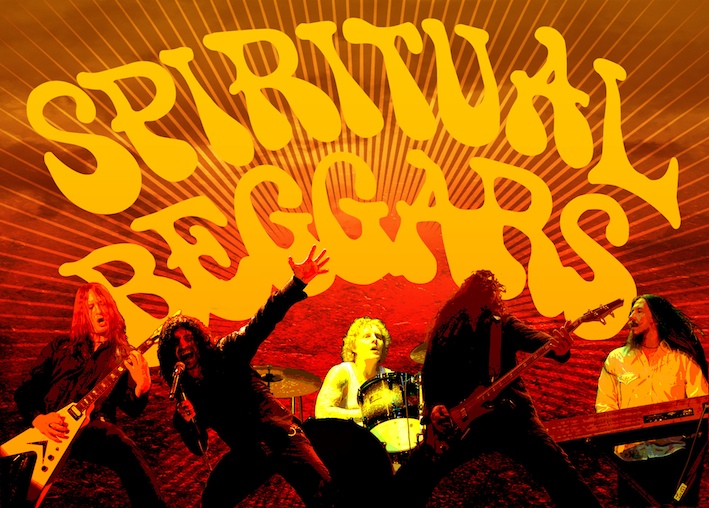 Spiritual Beggars’ ‘Sunrise To Sundown’ certainly impressed Louder Than War’s Mike Ainscoe (review here). Per Wiberg, keyboard player with the band, took some time out to give an insight into recording the album and goings on in the Beggars world.

Louder Than War: Alongside Spiritual Beggars you’ve  had quite a few things going on musically! Just tell us a bit about your own personal background and your influences and inspirations.

Per Wiberg: I grew up in a small town in the middle of Sweden. My parents are jazz fans so as a kid I heard a lot of Miles & Coltrane as well as what was popular at the time, like Hendrix, Neil Young, Carole King etc. I started playing in bands when I was 13, mostly keys and later on also guitar and bass. I listened to and played different kinds of styles with different bands(like now :-), Rock, Metal, Punk to Prog and Blues.. In the late 80’s I started playing with a Swedish Blues Rock band called Sky High as a professional musician and that’s what I’ve been doing since..

LTW: So to the new album…The title track and ‘Diamond Under Pressure’ were been released ahead of the album. What made you choose those tracks to preview the record?

PW: They’re both rocking and upbeat songs and even though I’d say the album’s quite diverse within this style of music I think they’re a good representation of what we’re about.

LTW: The band recorded the album with everyone in the studio and over five days which seems pretty quick. Did you have much done in the way of preparation before you hit the studio?

PW: Actually less than before. I guess we trusted our gut feeling on this one :-) We would run through a song a couple of times and then come with suggestions or arrangement ideas and then we’d just play it until we’re all happy with the take. it’s a quick and easy way of doing things for us.

LTW: What was it like to just have a short period in the studio – did you feel under any pressure?

PW: Not really to be honest. We’re pretty efficient and focused when we enter the studio. After all these years together we trust each other musically and we know what we want so I don’t think anyone felt a lot of pressure.

LTW: Would you say there’s been a more combined effort from the band members as far as writing the songs went on this album?

PW: Yes definitely, in the past I’ve written the odd song here and there as well as working together with Mike on a few songs but these last 2 albums have been more collaborative than before. With that said there’s always been a lot of team work in arranging and structuring the songs and Ludwig has always had an important role in working out the arrangements. He brought in 2 of his own songs this time as well which is great I think.

LTW: There’s been talk of a Lennon/McCartney style of the way you worked  with Michael (Amott)  – have you done that before or was it something new?

PW: Ever since I joined the band we’ve had a very easy working relationship cause we understand each other very well. Before it’s been about arranging keyboards or working out other stuff but on the last couple of albums we’ve given each other music for the other to write lyrics/vocal over. It’s a cool way to work I think and I hope we can do more of that in the future. The Lennon/McCartney comparison might be a little over the top though :-)

LTW: I thought there was a  definite Beatle feel about the piano section in the middle of ‘No Man’s Land’…

PW: My main inspiration for that middle section was to do something in the vein of Alice Cooper. I guess he’s always been influenced by The Beatles so maybe you could say it’s inspired by The Beatles in the end.

LTW: I believe ‘Diamond Under Pressure’ was something you brought in as an instrumental track? (any chance of hearing that at some point by the way?)

PW: It’s mainly due to logistical reasons since I’m the only one living on the east coast of Sweden and have a  5 hour drive to the rehearsal room. When I have ideas and riffs I usually record all the instruments on my own and send them to the guys so they can let me know if it fits or if it’s any good… Mike, Ludwig and Apollo live in the same town so it’s quite easy for them to get together and jam if they want to try things out. Personally I don’t have any interest in releasing those kind of ”quick” demos and I’m not so into the ”demo” bonus tracks on albums either.

LTW: That particular track has that really distinctive reedy organ sound straight from the Jon Lord style of playing. Would you say that’s something of a trademark of yours?

PW: Lord, Emerson and a few others kind of created the blueprint of how to play organ in heavy rock music so I’m just trying to pass  on this tradition It’s not so common nowadays to hear a distorted organ as a big part of a bands sound or even being the lead instrument from time to time.

LTW: The album is out on vinyl too which is great. Are you one of those bands who clearly embrace the old 12” traditions?!

PW: I’m a complete music nerd but I’m actually not a format nerd. I still buy music on vinyl but also lots of cd’s and it doesn’t matter so much which one as I think the music’s the most interesting part. Of course the sound’s different but when traveling a lot and being a music junkie it’s hard not to listen to music just because you don’t have a vinyl player… I like buying physical copies but it’s more of a generational thing I guess. DL’s are ok but pretty boring cause they say a lot less about the artists/bands since you don’t get the whole presentation. It’s always cool to see when someone really made an effort to present their music as a whole package.

LTW: Among the live bonus tracks  you also did covers of  ‘Thumbsucker’ by Mountain and ‘Stoned Woman’ by Ten Years After – why did you choose those?

PW: It’s difficult to find songs nowadays that other bands haven’t covered and I’m pretty sure many bands have recorded these already but they’re 2 cool tracks that we all like. Also I’d say Ten Years After is a little underrated as a band but we dig them and it was good fun to record Stoned Woman. We’ve covered Mountain before actually (‘Blood Of The Sun – On Fire’) and it worked so we decided to give another song a try.

LTW: There’s some terrific artwork with the album and ‘Diamonds’ – who’s behind that and how did the graphics come about?

It’s a guy called Costin Chironeau from Romania who’s a very talented artist, He’s done lots of stuff for bands and the Roadburn festival for example. He’s helped us before with some poster art and the re-issue of the first album a couple of years ago so it was an easy choice.

LTW: Looking back over the Spiritual Beggars career, how have things changed in terms of the band and their  music and the music industry in general?

PW: Nowadays Beggars aren’t the main band for any of us and it’s based on friendship and not on business which makes it effortless and easy I think. Our main ambition is to write and record music that we all like and to perform it live as good as we can, basically a celebration of the heavy rock music we all grew up on. In a sense it doesn’t matter so much what the music industry looks like for us cause we do this regardless. I’m very happy that someone is interested enough to release our albums though. When it comes to the business side of things it doesn’t matter what you think really, if you want to carry on as a full time musician you have to adapt and take it from there.

LTW: You have some European gigs coming up. Any chance of coming to the UK?

PW: There are no UK gigs booked at the moment but it would be great fun to come back and play a few shows since it was a long time ago now. I’ve always enjoyed playing with the Beggars in the UK and I remember playing lots of fun shows on the Mantra/Ad Astra/On Fire tours before. Fingers crossed then!