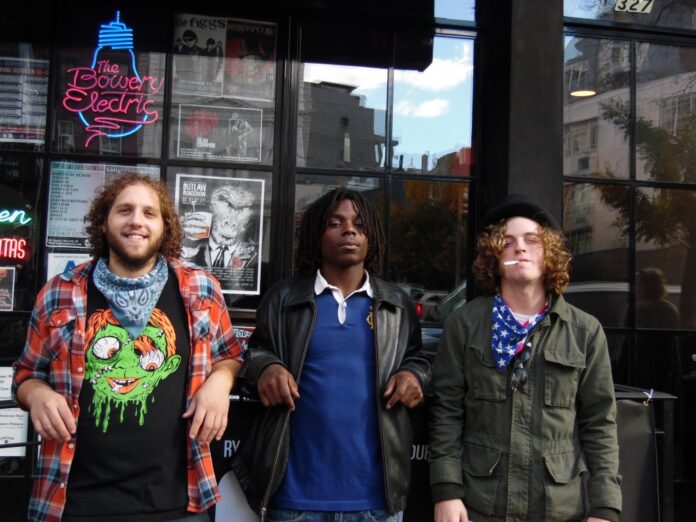 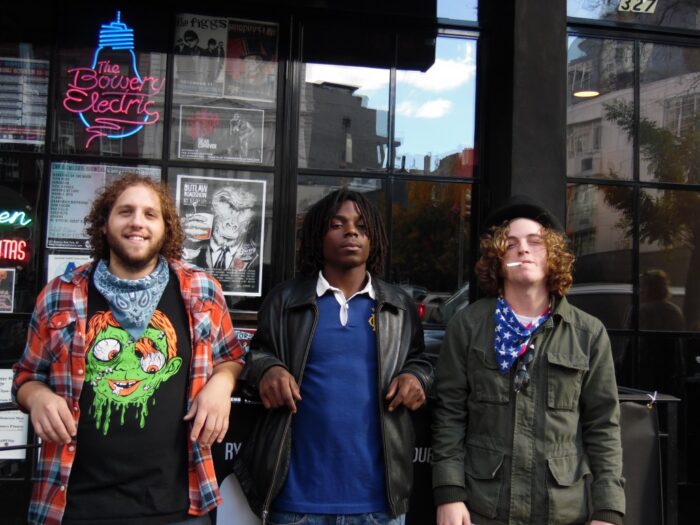 A dark blues band infused with a psychedelic, relevant confusion, spewing out ballads of drugs, murder and free will, similar to Led Zeppelin, but more intriguing, more fascinating, and more passionate, The People’s Blues of Richmond, is touring in support of their newest release, “Good Time Suicide”.

The members of the fraction stood outside a New York City venue after their awesome performance smoking cigarettes and just having fun. All of them incredible musicians, talented vocalists, and a mix between Black Sabbath, and The Black keys, tainted with Led Zeppelin. Their newest single Gone,Gone, Gone, is an essential song that has got to be experienced.

At precisely 3 o’clock, as arranged the group walked over to Louder Than War, guitarist Tim Beavers, bass player Matt Volkes and drummer Neko Williams, to explain their existence, their powerful force and their music.

Louder Than War: When and how did you all get together?

Matt: We started 7 years ago.
Neko: And me in 2012
Tim: Me and Matty knew each other since elementary school. We lost a mutual friend and we sort of got together around that. We met Neko through the local scene in Richmond, it’s a really great tight scene, so when our other drummer didn’t want to go full time, he was ready and wanted to.
Neko: It was a great opportunity.

T: We All do. It’s collaborative.

Do any of you have a favourite song?

M: It always switches. As we write more songs, new favourites pop up.

Where do you see yourself going musically?

Neko: Straight to the top.
Matt: Everywhere, all over the world. We are just trying to spread some music. Music’s the one thing that when I’m down it brings me back up again. You take a bad day and it kind of helps you get rid of that frustration. Really we just want people to hear our music, to feel inspired, to wake up another day, or just keep doing what you’re doing, or something they love. That’s why we’re playing, because we are have fun doing it.

Now you are doing this for a living, full time, correct?

Tim: Yep, we don’t have another job.
Neko: We live together.
Matt: We have a house and we’ve been doing it like that for three or four years now.

What is your favourite thing about playing live?

Tim: I’m kind of a junkie for the way it feels. It’s like adrenaline and sort of like an exciting blur, as the set goes by. It takes me out of everything else in my head, to focus on playing, singing. It’s always just a ton of fun and I love the way the music sounds. It always does something for me.

What’s the most embarrassing thing that has ever happened to you live?

Neko: Oh, right before I got on stage, I went to step up and my pants ripped. So I had to play a show with ripped pants.

Well how much did they rip?

Do you have any big events coming up?

Matt: Actually we’re going to be playing “Bowery Ballroom” in January. We’re going to be headlining. And we are about to release an album. We’re hoping to release it in the springtime, with a lot of new tracks, and we’re going on tour with Papadosio, we’re doing five shows with them. We just released a music video through crave online actually. We produced it with Mark Neil. It is a song called Gone, Gone, Gone. It’s an awesome video too.
Tim: We’re just all about hanging out with my friends, and making cool stuff.
Neko: We like playing music.

How long of you been playing the drums?

Neko: Since I was two years old. My dad is the drummer from the Wailers. They are going on tour again in November. My mum plays piano. I thought we would be the next Jackson Five when we were growing up.

What inspires you guys?

Matt: The struggle of life.
Neko: Do what you love best. I don’t want to sit behind a desk. I’m playing the drums. What ever you are good at, do it.

Where are you going to be in 10 years?

Tim: In a band called The People’s Blues of Richmond.

Who thought of the name?

Tim: We put it together. We were practising in a room in a house that we were sharing, and all that was laying around was cans and some cigarette butts. The name Blue’s in Richmond kind of evokes the suffering and the crazy metal scene and the ground punk scene. There are a lot of interesting currents that you can hear in our music, some of the heavier stuff, some of the yelling that we do, is from what was going on originally.

Anyone want to say something else?

Matt: Rock ‘n’ roll! Fight for it. Don’t give it up. Don’t let anything substitute that whether it be a drug, or anything. Just be happy.