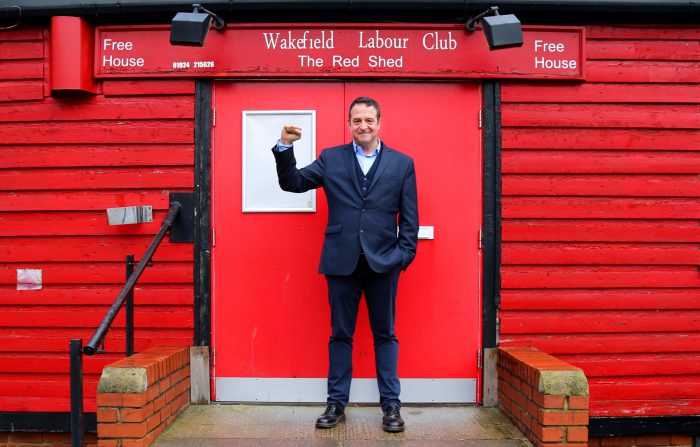 Paul Clarke talks to Mark Thomas about his new show The Red Shed which sees him go back to the place that shaped his politics.

Most people will know Mark Thomas from his provocative TV shows where he used humour to mock the establishment and took direct action to laugh at the absurdities of capitalism.

Mark actually trained as an actor before making his name as a stand up but in his more recent shows have been far more personal affairs melding acting, stand up and polemic.

The Red Shed is part of an informal trilogy that include Bravo Figaro reflecting on his relationship with his opera loving Thatcherite old man and Cuckooed where he talked about how betrayed he felt when a close colleague was revealed to be a corporate spy.

“The story is very simple as the Red Shed is a socialist shed in Wakefield where I used to go as a student and it became part of the formation of my politics and the formation of me as a performer,” recalls Mark. “It was the first place I performed in public when I was a drama student and we used to go there putting on shows. They were always about raising money for campaigns and local causes.”

This year the Red Shed celebrated its 50th birthday as a rallying point at the heart of its community so it seemed the right time for Thomas to think about creating a show looking at their history and what the future might hold.

“So I went up there and started talking to people in the Shed and one thing I had was a memory of when I was up there and on the last day of the Miners’ Strike I was invited to march back to a pit,” says Thomas. “As we marched past a primary school the kids from the playground sang Solidarity Forever to the miners. It was an image that stayed with me, and is part of who I am, so I decided to try find the school and the kids to see if that story was true, which is what the show is all about.

“The show is about what has changed in those communities, with the left, the Labour Party and the movement. It’s about class, culture and it’s a lovely mix of what of what I do now which is storytelling and stand up.”

I did ask if he had tracked down those pre-teen revolutionaries but Thomas flatly refused to give Louder Than War any spoilers although he did make it clear that his shows fuse a number of different styles these days including returning to his acting roots. So people shouldn’t go along expecting a standard stand up set?

“I don’t think they do these days as I haven’t done stand up for years so anyone who has seen me do live knows I don’t do that any more. If people watch Dave more than three times a week don’t come to the show.”

Whilst the Red Shed has just celebrated its golden anniversary 2015 was also thirty years since the epic Miners’ Strike finished which was clearly a dispute that informs his political worldview to this day. But a cynic might ask why should an event – no matter how significant at the time – that now seems like ancient history still matter? Not surprisingly Thomas is quick to knock that feeble argument down.

“If you go round the old mining villages those are the places that have the worst instances of unemployment, of low educational qualifications, of domestic violence and all that kind of stuff. The shutting down of the pits and how it was handled has scarred those places to this day.

“The Miners’ Strike was a huge turning point and we live with the consequences of it. Thatcher would not have been involved in the way she was if had been another union, not implemented privatisation in the way she did and she wouldn’t have broken up society waging what was effectively a class war on behalf of the ruling class.

“Thatcher started the move where the gap between the poor and the rich that got bigger and bigger and it’s not stopped. That’s what Red Shed is about in many ways.”

Red Shed was produced in collaboration with the West Yorkshire Playhouse and in what looked like a risky move they sent it off to the Edinburgh Festival for its first run. The result was a critical hit packing the crowds in as Thomas picked up a couple of awards, but was he surprised at the reaction to a show about a load of lefties having a drink in a shed?

“No, I’m quite good at what I do,” asserts Thomas. “I’ve done this for 32 years and I haven’t fucked up too badly although I did manage to piss all over any career I might have had in television which was quite interesting. I’ve managed to offend all the right people and we should always be looking to be doing that which l’ve done with great aplomb.

“I love the fact I can do whatever I want and people who come to see the shows to know they will get something different each time. People come for the first time and go ‘oh fuck, you can do that’ which is great.

“You never where the show is to end up, and I’m happy with the reaction, but you take nothing for granted. I don’t think people are frightened of going to see stuff that has a big wodge of content to it.”

The Red Shed is the perfect way for Thomas to finish this informal trilogy which has stretched from the deeply personal to reflecting on how all communities are stronger together. It also seems to have sparked a creative renaissance as Thomas really pushes his craft.

“I fucking love what I’m doing now and the only thing on the horizon is the next show and who knows what the fuck that is going to be.”

You can follow Mark @markthomasinfo or book tickets for The Red Shed your which is now on the road until December online .