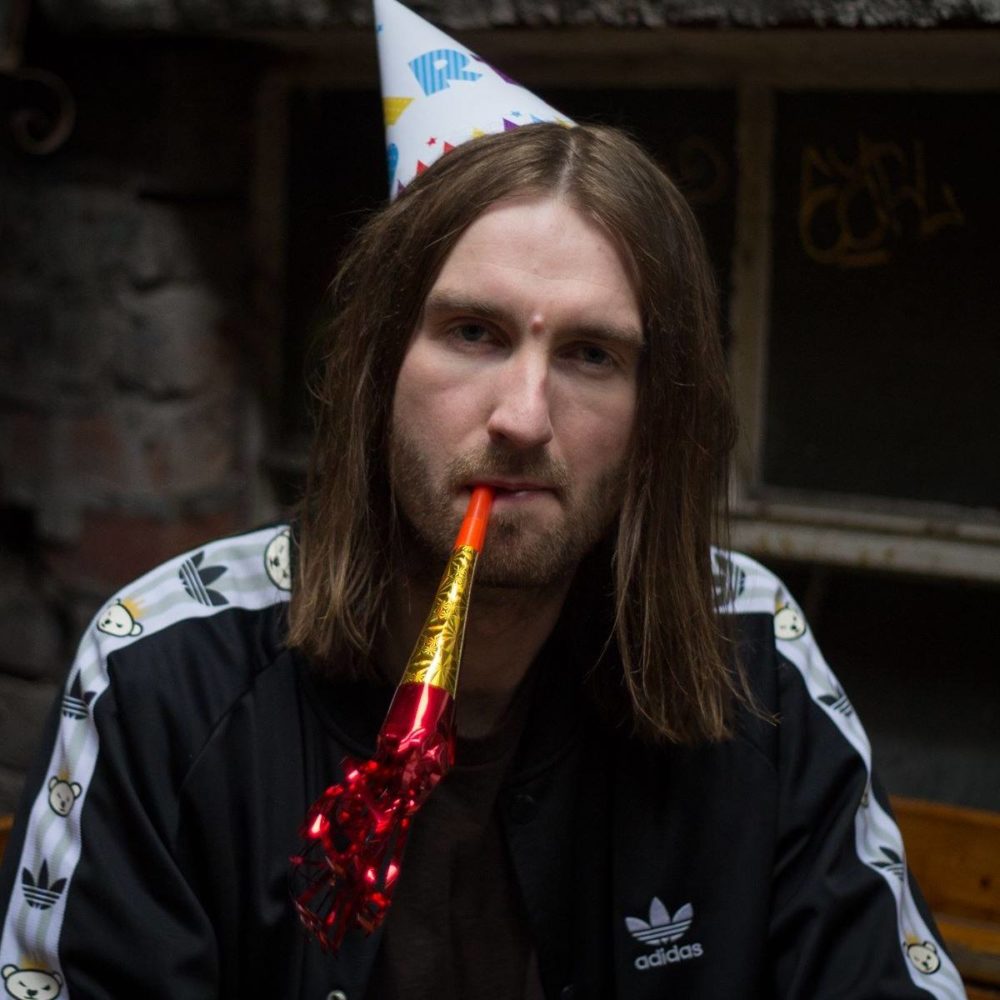 Will Metcalfe catches up with Patrick T. Davies for his first feature with Louder Than War.

With the influx of cheap and chained Weatherspoons, as a nation, we have forgotten the power and value of the local. Mark E. Smith said something about the best way to find inspiration for song writing is to go down the boozer. Fucking Kettle crisps over nuts? And let’s not even get onto the horror show of the common lack of jukebox AND pool table. There is no character when it comes to Spoons. It’s just a licensed concoction of high street food outlets. The millennial twang of Spoons couldn’t be further from Manchester’s Castle Hotel, where a catch up with spoken-word artist, Patrick T. Davies awaits. 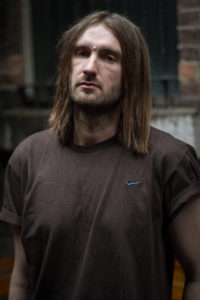 trix, and it wouldn’t be the truth to say that he has never strummed a guitar in an attempt to put some order to his words. However, he found this process was taking away from his true potential; ‘I was writing more traditional style tunes and demoing them with a couple of mates from Mossley. I found doing that, even for a bit, frustrated me. I think (spoken word) it’s a wordier, a wider encompassing way of writing, so when I do the spoken word it gives me the opportunity to push it as far as I can’.

The thought of having no band or backing track may seem daunting, not to mention the contrast of the audiences which Patrick has performed to; ‘I figure if you’re doing the band gigs, there is definitely more of pressure of having a firing command about it really. When it’s a comedy spoken word evening, it’s a far more civilised affair. The host will come on, saying something like, ‘some people are really experienced, some people it might be their first time, so please don’t be rude.’ I tend to get quite shouty and animated anyway. So yeah, I manage to get people to pay attention’.

To contextualise, the contrast in question ranges from seated comedy events, to sold out gigs at the Ritz. But more on that later.

Seeing Patrick perform is like listening to a horse racing commentator, spitting brutal honesty about the life of a young person in 2018, and is a theme which he feels strongly about; ‘Everything I write is through a lens of living in Great Britain in 2018, and how that is at the minute. In terms of how turbulent the times are, there aren’t enough bands who are getting exposure that are doing that. Cabbage are the obvious one then The Blinders and IDLE’S’.

The soundtrack of Brexit Britain. Almost sounds a Guardian listicle. Sticking with the theme of where British values actually lie, Patrick’s only release thus far, ‘Mob Rule Britainia’, was backed with a video demonstrating the dreary, Orwellian, not-to-distant future, where the only real sense of national pride we have is that of a Royal fucking wedding; ‘I just stuck that out to fill up the mean time so I could get stuff sorted properly. Even in the time from May until now, the way I’m getting with the production and stuff, I’m learning with it all the time and getting more adventurous with it. It was good to put that out there as a sort of aperitif.’

For those of you familiar with the video you may, like myself, have one burning question, and here is its answer; ‘I cant remember actually. I made use of my former employee rights. Black currant cordial, milk was what made it curdle’. Sparked an interest, yes? 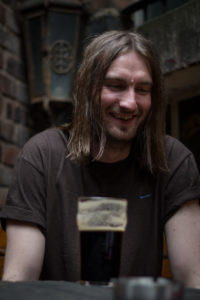 In terms of the local gig circuit, it is surprising that spoken word isn’t celebrated to the degree it should be. It’s easy to strum a four-chord-shit-show which at least three bars in Manchester can offer at any time, and the writing process of the two arts hardly compare. The scenes prior to doors at a gig can be chaotic, so when some cunt with nothing but his coat (Patrick doesn’t even have a little black book when on stage) shows up claiming he’s one of the warm up acts, it can get a bit silly; ‘That’s one of the funniest bits, you turn up and there’s all the promoters and managers there saying, ‘oh we didn’t have this pencilled in’.

But how you may ask? How does one manage to just find himself spitting his equally comical and relevant lines into a microphone in front of sold out crowds? The answer lies within the pint dispensing hub where we meet; ‘It’s just me walking around here pissed really,’ half-slurs Patrick, gesturing towards the old fashioned décor of the Castle Hotel, ‘saying I’m doing a bit of writing. Most of the time people seem to be into it and are interested in giving it a bit of exposure. Humbling really’.

When these chats are spiking the interests of members of Cabbage, The Blinders, and none other than the-man-behind-mancmusic himself, John Hall, you are bound to get in with the right crowd; ‘I don’t know anyone (John Hall, mancmusic) that is just so dedicated to going out and watching music and plugging bands every night. He’s been a huge support for me. Even when I first started in little pubs, he’d be going around, rounding people up going, ‘You’re about to witness one of the greatest moments of your life’. He loves to get it on his channel and document what’s happening in the city on a DIY level’.

Wandering around talking to random people at Piccadilly Tavern (aka Weatherspoons) could get you attacked and probably mugged. Do that at The Castle, and it may well get you slots at The Blinders’ sold out shows at Deaf Institute and Gorilla, Cabbages’ Glamour At The Ritz and the 40th anniversary marking of the first Rock Against Racism gig in Manchester. Or to put it in the humble words of Patrick himself; ’One minute you’re in a pub in Salford next minute you’re on stage at the Ritz’. 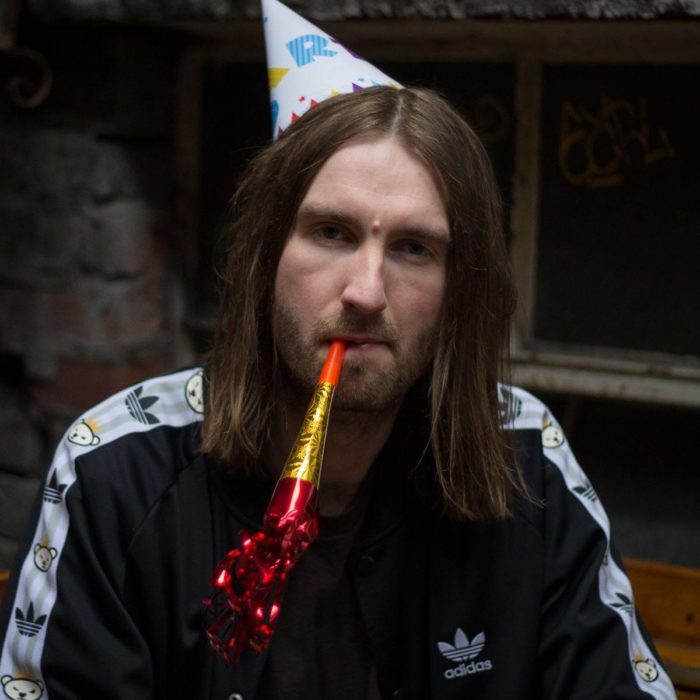 Patrick has also made a recent business trip; to Columbia. Anyone familiar with the Blinders’ debut album will be familiar with the promo video, which features none other than the bleak northern bark of the man himself, reading the sleeve of Columbia, which The Blinders are also now using as an entrance on their next tour. And who’d have thought it was recorded in the Gorilla carpark. But is anyone else seeing history repeat itself slightly? Let’s exchange Cabbage and The Blinders, for say, Joy Division and The Fall? Could Patrick feature as himself in a biopic titled Columbia instead of Control? The resemblance is uncanny.

The lyricist who’s never been in a band. The poet who hardly reads. The Speaker of Colombia. With plans to release his debut EP going into early 2019, one question remains unanswered; in 20 years’ time, will Patrick be begging for this?

‘This must be the sign off question. I like that. I don’t know, we’ll see how it goes from here on in. Hopefully not, we’ll just have to see how paying the bills goes.’

And if the bills aren’t paid, even Spoons would be a stretch.