Mastermind behind “The Outsider”, Sean Corcoran has recently released an inspired single and history making video entitled, “Mioi Mor Mara”, filmed in the beautiful countryside of Ireland, taking the viewer on a spiritual journey of a lady being released from an monotonous life. 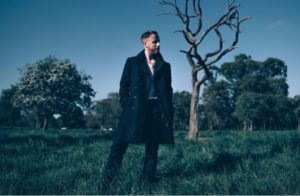 The song hallmarks lyrics in both English and Gaeilge, and is included in the football simulation electronic video game FIFA 18, historically the first time the Irish language has been used in mainstream gaming. The Outsider’s music has also been featured in Netflix’s “Shadowhunters”.

I spoke to the Outsider while he was driving on his way to Dublin. His song “Mioi Mor Mara was motivated by an awesome story which he shared. His music is alternatively rock influenced, both compelling and captivating….

What was the inspiration for your song?

Which one? You mean “Mioi Mor Mara”?

I don’t know, I can’t pronounce it, what language is it in?

They are all hard to pronounce. That’s Irish. That’s the Irish language. Not many people know that there is an actual Irish language. There is. We’ve just been speaking English for the last 800 years, but about 20 to 30 thousand people still speak Irish. The song is mixed with English lyrics, and there’s Irish in the chorus. So there is a story behind this. Basically I was playing in a band and I was going out with a girl in a long term relationship. The band broke up and our relationship split up so I moved to a new city. I was kind of in the depths of despair as you would be. I lost quite a few friendships plus the girl I was in love with. I started a new job and I was working with a kid who had Downs Syndrome every morning. He kind of lifted me. He was a sort of cool kid. He was full of joy and life. I was down, and he lifted me everyday, which I thought was really cool. It had a profound influence on me. With this EP my song writing style has been all subconscious. So instead of saying I’m going to write this type of song, I just write whatever comes out. Afterwards I’m able to verbalize or conceptualize my writing. So the song kind of formed. I was reading a lot of Joseph Campbell and there’s a lot of religious symbolism in the story of “Jonah and the Whale”. He kind of explains it from a psychological point of view saying that’s symbolic of some kind with marks in your life swallowing you up, and it takes you on a journey, and you change forever. That’s how the song develops, based on that concept. So there you go.

That’s some story. So this girl you broke up with, does she know the song is related to her?

No. I don’t know if it was written for her. It was more so written about my relationship with the kid. There are songs that will be directly linked to her alright. This one is more about overcoming whatever. It was a life change. Something you  perceive  to be a disaster could probably be one of the best things that happens to you. One of the hardest things in life is loss of a relationship, friendships and loved ones. It can really change you at your very core. It kind of changes your perception of yourself and your life.

Where are you originally from?

I am from Tipperary originally, but I wrote the EP when I was in Galway. But now I’m living in Dublin.

How did you learn to speak that private language ?

It’s not private, you can tell everybody about it. I teach the language. I mean we’re taught it in school from when we’re 4 or 5 years of age. Obviously we speak English already but we learn Irish because it is our native language and we don’t want to lose it because of colonization. I think there can be an elitism with this language so basically there are people that can speak it very well. Then there are people that can’t really speak it well. There was kind of a nationalistic element with it as well, and there is no in between. I kind of created the in between where I take the language and mixed it. Usually people are unbelievably staunch about speaking Irish or they have no interest. I like the way the Pixies use Spanish in their songs.

Where are you going to be in five years?

In five years I want to be selling out stadiums. Most people won’t say that but that’s exactly where I want to be. I think I will. I think I’ve got the songwriting ability to do it and the  work ethic. The songs are kind of alternative. Just with using my own language I didn’t expect this song like “Mioi Mor Mara was featured on FIFA which is a huge soundtrack. I signed with a label in London. I didn’t expect this to happen so soon. I have songs that I think will be as big as Bruce Springsteen or U2. I love that type of music. I love lots of alternative, obscure music too. That’s where I’d like to see myself, I love that stadium sound. INXS and Simple Minds they were such crazy bands. They were like post punk lunatics and then they went to a big band sound and I thought that was really cool. I think it’s a cool journey to make, so yeah, that’s where I see myself.

I think I’ll see you there. Are you working on anything new at the moment?

I am, good guess. I went straight back into the studio. I released the EP but you have to wait for people especially with the style of music I do. It’s not pop music that you can put on the radio. It’s alternative music and you have to wait for people to kind of get to know it. Also it’s just an EP of four songs. I have a lot more songs, probably two albums worth. So I just wanted to get straight back in there. I’ve been working on two new songs. I just can’t wait to release them. One is actually called, ” Neo American”. Sometimes I feel like the rest of the world just watches America. It’s really like a soap opera sometimes for us here. I find sometimes I become desensitized to it. On TV we watch what’s happening in America.

It’s a soap opera to us too, a big reality show.

Exactly. I think America gets a hard time, everybody really concentrates on it. It’s kind of a song about that. There is a huge Americanization of Irish culture, which I don’t necessarily think is a bad thing. So that’s what the song is about.