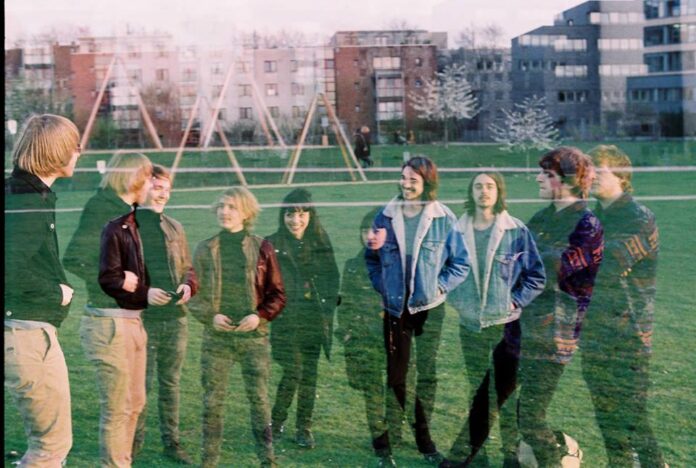 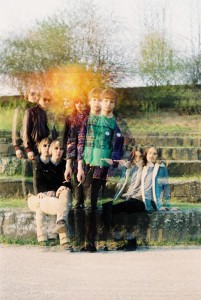 The German psychedelic/shoegaze/Electronic-disco band Oracles had their first gig in April. Since then they’ve been playing major festivals, released an highly acclaimed EP and became the favourite band of Peter Doherty.

Louisa Zimmer talks to drummer Niklas and singer Joshua about the past and following months.

LTW: The band has members from Berlin and Cologne. How did you meet and form the band?

Joshua: We’ve been friends and also working musicians together before the band started but in different constellations. There were for example Nils and I who are friends since were 15.  Then we met Niklas a few years ago, long before ΩRACLES started. There was also Dennis and Hanitra who we are at the same party. Basically there were friendships before the band but not everyone knew everyone. Like in different constellations.

Niklas: You could draw a nice geometrical map of it.

Joshua: It started all with Nils and me making music together occasionally cause we’ve been playing in other bands. Then we were looking for a drummer, which was Niklas right away. Then it just grew quite naturally.

LTW: You had your first concert at Clouds Hill Studios in Hamburg this year. What happened since then?

N: We started playing more. The first couple of gigs were public gigs, self-organized by us at places we are most of the time playing music, in Cologne and Berlin.

J: We started working together with a friend and booker quite fast. We organized the first shows, some more shows followed. We had recorded an EP before playing our first show. The songs had been written before the band got together in that way. We’ve been playing shows since then and released the EP ’Stanford Torus’.

N: We’ve got a tour coming up in November. In December we’ll record our first full-length album. So much for this year, it’s actually quite a lot. We’re occupied for this year. The band’s a full time affair.

J: We started and grew really fast. It’s been a year and two months since we formed the band.

LTW: The band has been featured in a lot of blogs recently. When did you first notice that a hype is building up around the band?

J: Is there really a hype? For the time we’ve been playing together it’s quite big. We did a lot, like releasing an EP on an actual label and not having a Soundcloud account for a few years and building it up slowly. But I don’t feel a real hype.

N: But the thing that’s nice is having had that one song out. If you really had to break it down, for me it’s amazing having just one song, then the second song and then the video.

J: That’s quite typical nowadays for a new band. We’ve been planning on and on. We’ve finished the EP, we’re like ’let’s play a few shows’, played a few shows, then were like ‘we have enough songs for an album, let’s do an album’.

N: It’s nice to see that you set certain goals and try to get them done. That sounds rather stupid, but works out. So let’s see where the journey goes. A hype feels somehow like something’s building up which is not naturally there. Extra-musical. So far it still feels natural, I don’t feel like it’s being too hyped. That’s fine, not being too hyped but also not going nowhere.

LTW: Joshua sang in Beat!Beat!Beat!, Niklas was in Stabil Elite. Does ΩRACLES profit from your former projects?

N: It’s hard to say, one thing I’m really grateful for is meeting our current booker/manager and our label is largely due to the fact that I knew the guy and the label from playing there with Stabil Elite in 2012. That was the connection in there.

J: It was the same with me. I met through BBB a lot of people who work in music and also I think that we all played many shows before, made records and produced stuff. We’ve learned a lot so we didn’t start ΩRACLES at ground zero. We’ve already had some channels where we could send music too.

N: The work is not in vain.

LTW: Psychedelic music and shoegaze have faced a comeback lately. What music inspires the band?

J: Not only psychedelic music, I’m for example really into the new War On Drugs album.

N: The album is going to be rather different from the EP. There are going to be songs on there which are influenced by all sorts of music. That’s the case with the EP, but we weren’t as focused yet.

J: Writing an album is really different because you try to find your own sound. It’s not just psychedelic, it comes from everywhere.

N: Yeah, the EP’s also lot more electronic-discoish than the album is going to be.

J: It’s just a matter of how I feel today. The last three days I’ve been listening to Hip-Hop straightaway.

N: I’ve been pretty much into Free Jazz. That doesn’t necessarily mean that everything we listen to finds it’s way into our music.

J: There’s not actual Hip-Hop in it. But your drumming is quite jazzy.

N: There are traces finding their way into our way. Maybe it’s a subconscious guidance.

J: We’re five members and every one is equally putting in creative stuff. Everyone of us is listening to everything, digging everywhere. It’s too much to break down into a few things.

N: You can also take out the same emotions from different types of music which we do a lot. If you take some Brazilian music from the ’70s you can add some harmonies and feelings that are equally to something that happened in America in the ’90s. A real postmodern approach.

LTW: Peter Doherty introduced you as his ’favourite new band’ in NME. How did that happen?

J: We were neighbours at Clouds Hill and they have a studio in the same building. We’ve been there playing our first show and Peter Doherty was recording his new solo album with our label boss, Johann Scheerer. He came to our first show and we spent some time in the same apartment but we’ve been working separately. We spoke a few times and then we ended up in NME. We didn’t know about it. It wasn’t like a publicity stunt.

N: It seemed to have made an impression on him. A nice effect was that we opened for The Libertines in Copenhagen a few weeks ago. We’d love to play shows in the UK and abroad. We had never been to Copenhagen, it was really nice. We love to play in Germany but performing abroad is like a vacation where you meet new places and people.

ΩRACLES are Joshua, Nils, Hanitra, Dennis and Niklas from Berlin and Cologne.

All words by Louisa Zimmer.