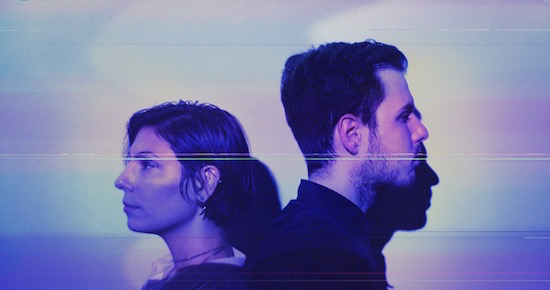 Brooklyn based experimental electronics artists Opal Onyx are set to release their debut album, Delta Sands, on 25th August. Their music has been described as “layered ambient electronic noise (which) flows beneath distorted guitars (and) gracefully against the murky cello.” The new album itself has, in turn, been called “…a haunting and captivating first album …” Intrigued? Want to find out more? Then read on…

Opal Onyx are Sarah Nowicki (vocals, guitar, mpc) and Mathew Robinson (cello, synth, lap steel). Josh Cooper recently caught up with them to try to get some insight into the how the band works and to get the low down on both the new album and the latest video for Black & Crimson, which you may click play on now before you start reading:

Louder Than War: Hi guys, hope you’re well. First off, why not introduce yourselves?

M: Hi ! I’m Matthew, I play cello and tinker with other things from time to time.

S: Hello, I’m Sarah and I sing, play guitar, mpc, write songs, and also tinker with other instruments and sound.

H: Hi ! I’m Heidi Sabertooth – I am a multi-instrumentalist – keys, trumpet, voice, guitar – who fell in love with electronics – I sample my instruments to make soundscapes and song forms.

Your name, Opal Onyx, brings to mind light creams, white and clear marbled textures – yet your music comes across as inherently dark. What was your reason for choosing the band name?

M: Opal Onyx seemed to make sense in reference to how our music can at times have a very heavy, dark feel as in Onyx. Never intending though to conjure negativity and thus Opal adds the ever-changing color and lightness of our personality and facets of our work.

S: Yes, and also a few of the opal stone meanings are actually passion, love, emotional expressiveness, warmth, spontaneity and dramatic ability. All of those characteristics are very inspiring for us to fully embrace and incorporate into our sound. And the Black Onyx is our more momentous and delphic side.

Your music video, ‘Black & Crimson’, gives a great example of this dark imagery. It’s dream-like and totally captivating. Where was it filmed, and what was the process like?

M: Black & Crimson was a blast to shoot. We took a trip to Caterskill Falls on an impressively foggy and rainy October day. We shot late into the night with our friends Giselle Zatonyl and Stivan Widdick. The best part was feeling the increasing solitude as light disappeared into night and the hikers left for the day. It was very fitting for the vibe of the song.

S: Yes we are very lucky to have found Giselle and Stivan! They have a wonderful vision and really were able to capture the mood of the song. We all have a very special creative connection and have become closer friends since. We’re currently working on a new and very inventive video for our song Personal.

I understand you have involved yourselves in a lot of electronic music communities of Brooklyn, such as the International Winners Collective. Tell us more about this.

S: The International Winners Collective is a group of experimental electronic musicians that have come together as a community booking shows primarily based in Bushwick Brooklyn. Many of the bands are coming up with very inventive new sounds and are extremely supportive of each other. A large percentage are my friends and I frequently attend their shows, but Heidi (our new bandmate) in her solo project Heidi Sabertooth has mostly been involved with the collective in performing her work.

H: Yeah! International Winners is like family — experimenting in sound and playing shows together. I think the first compilation album is about to drop too, so that’s exciting!

How has that been, signing with Tin Angel? Have you built up any interesting relationships with any of the other artists?

M: Tin Angel is the best. I was introduced to Richard Guy while working with Baby Dee. She has been an amazing friend and one of the greatest musical teachers I’ve had in this world. I could go on and on, but Little Annie and Ed Askew are incredible folks too who we’ve had the honor of meeting within the roster as well.

S. On our last tour of the UK the Tin Angel crew were incredibly supportive and made us feel so at home. As soon as we showed up they let us jam out in their studio and the lovely Matthew Cederick of Tin Angel stayed late at the office to turn out some last minute T shirts. We couldn’t be more lucky to have found them.

And it’s been an honour to get to know our fellow label mates Baby Dee and Little Annie. I remember when Dee and Matt first met and how explosive it was. Our first show in NY was actually a Baby Dee retrospective at Joe’s Pub and after dissecting one of her songs to cover I really began to understand what a seriously brilliant composer she is. She’s impacted our lives in so many ways. And through Dee we met Little Annie who is a serious soul sister and genius lyricist. Her captivating presence and witty raw vocals are legendary and we will be graced to have her perform a few songs with us at Glasslands for our album release show on August 25th… we are so stoked!

Tell us more about the album, Delta Sands – What was the writing and recording process like?

S: The songs were written over the last five years and seeing them come into full blossom was extremely cathartic. There was a lot of restructuring, playful discoveries, and sampling that at one point involved throwing a broom, chains and other various objects down the hallway. Cedar Apffel of Alligator Lady Studios worked really hard with us and managed to capture our vision in a great way. Our sound was also a lot different than other bands he had previously recorded and it was our first record so there was never a dull moment. He even laid down some bass for our song Desperate and some backup vocals at the end of Arrows Wing. We’re really looking forward to hearing what it sounds like on vinyl… should be receiving them any day now!

M: Delta Sands crawled out of a swamp somewhere in Ohio and followed us to New York. It was a familiar acquaintance that took about a year in the studio to whip into shape. It was like the relief felt upon telling your closest confident your most coveted secret. Or the relief felt when taking a giant shit you choose.

Do you find the working relationship and creative process easier being a two piece?

M: We have been a two piece out of necessity for a long time up until recently with the addition of the incredible Heidi Sabertooth. It took years to find her and it was well worth the wait. As we progress in direction the sound we’ve always wanted will now be much easier to accomplish with three of us.

S: Yeah I grew up writing songs on guitar and started to get bored fast. I wanted different textures and sonic landscapes to play with so I began sampling sound and got my mpc and Matt started getting really experimental with pedals and other various instruments. Still, it was frustrating trying to juggle it all and we’ve always known we’d need a third in order to fully implement our desired sound. And it’s so crazy that we found Heidi. She’s beyond what we could have hoped for really.

H: Well, I am super excited to be involved in the mix! When I moved to New York a while back I immediately started collaborating, playing in bands. But then I took a pause to focus on my solo project for the past couple of years. When I met these two creatures and heard their sound. Wow! We kept playing shows on the same line up and admiring each other’s sound. One thing led to another. A few magical jam sessions in the studio and we said, this is it! It sounds like we are dating! Hahah.

The last time you toured the UK was with the Irrepressibles, when can we expect you again?

M: Not to steer off course, but The Irrepressibles are fucking amazing. They are the most inspiring and tenacious folks we’ve met in a long time. We’d love to come hangout in the UK with you all… maybe in Fall ?

S: That was my first time in the UK and would love to go back again soon. There’s also talk of Berlin in the fall, but hopefully we can connect the two.

Thank you so much for your time and insight, is there anything else you’d like to add? Any more exciting plans for the future?

M: Thanks for having us !!! We are exploding with all kinds of energy to get back into the studio and make another record.

S: Thank you that was a pleasure! Releasing our new material is the main priority and we have our eyes on a couple local producers. We’re looking to have the next album / ep in quick procession and keep the momentum up.