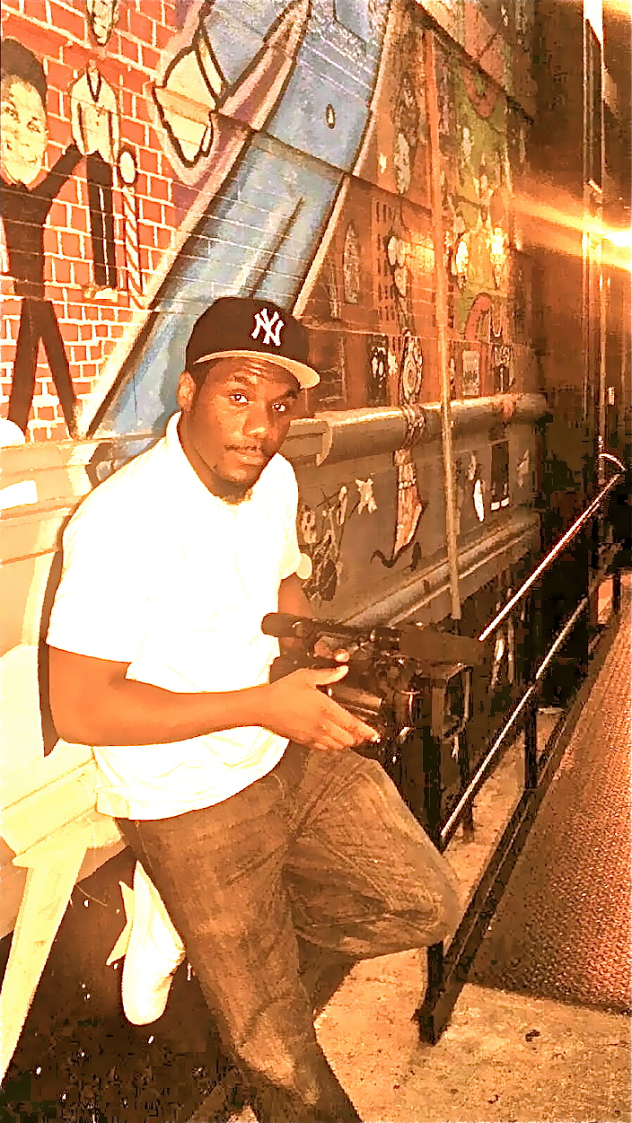 The first time I came across Cliffy Barz was 4 yrs ago with the ‘Harlem Streets’ mini documentaries on Youtube, probably some of the most viewed self made NY street-doc’s on line today Cliffy not only documented life on the streets of Harlem but all the cities boroughs. And with his unlimited access to places most film makers wouldn’t even think of stepping out into his collection of independently made street-docs made their mark on line racking up literally millions of hits from viewers worldwide. That’s as well as his video’s on line interviewing leading hip hop artists like Mobb Deep’s ‘Prodigy’ and Dipsets ‘Juelz Santana’, who grew up on the same block as Cliffy in Harlem. Here I talk to Cliffy on his life, work and why he felt it was time to document and cover his own story.

Looking back on your time as a film maker you’ve covered so much, from your own style NY street docs to interviews with name hip hop artists to making and producing music videos for upcoming NY rap artists. Is it this which gave you the inspiration to put it all together for a film covering your own life, both behind and in front of the camera?

Cliffy Barz – Well, I feel like it was time for me to cover my life both in front and behind the camera because I feel we all have amazing journeys that we go through in life.  As for me, I think my story not only is interesting but I think it can inspire many people across the nation especially up and coming film makers who have Ideas and want to tell it to the world.  I feel in this day and age its okay to show people the real you, and I don’t mean reality TV because even much of that is scripted.  I guess that’s why I like documentaries so much because in a documentary you don’t have to be perfect.  There are no lines to memorise.  Its just you, your thoughts, your feelings, and the camera.

In this era of empowerment, in terms of going from your laptop or camera to the world in a click of a finger its something which has given people all over the world the opportunity to create and show their own videos to the world. Describe the effect it had on your life when you started out?

The film industry as well as media as a whole changed tremendously since I started.  When I started getting into film and started my Harlem Streets TV show, the production process was very different.  I’m from the era where you had to edit on VHS tapes and transfer footage back and forth.  Soon after it evolved to mini dv tapes which required you to have a fire wire cord in order to upload your footage to your computer which took plenty of time, then you had to edit it.  I remember spending hours if not days just to edit a 30 minute show.  In my early stages of film production I remember spending so much time editing just making sure that the video came out right.  I remember taking my time to make sure that when someone saw a Cliffy Barz video, they would enjoy every aspect of it.  Nowadays the game has changed. When I started filming years ago many people didn’t have cameras.  Cameras were too expensive but I knew it would be my passion so I had to get one. Now, every cell phone comes with a camera.  Cameras that use to cost $1000 are now $500.  There are no more mini dv’s and no more long uploads.  Now everyone uses Sd cards, which is an extremely easy, fast, and a simple way to upload your footage.  People nowadays no longer even need to take their time to sit down and edit anymore.  They can just post the video as it is and can get hundreds of thousands of views.  In my early film days editing equipment was very expensive, but now people can edit for free on there cell phones by downloading apps.  I have seen so much change over a 10 year span when it comes to media and film production. I believe its going to change more, but the main thing is for me to always be two steps ahead of the game and ready to adapt to change. 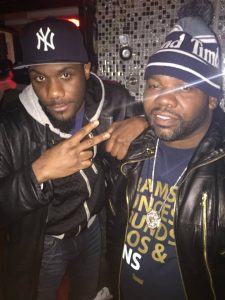 Putting together some amazing You tube doc’s/interviews and music videos what are the films for you which you rate as your greatest features. Me personally I really enjoyed watching the ‘Compton’ street doc you put out around 2012, a very effective doc indeed?

There were actually many viewers that told me they liked a large number of videos and documentaries I put out, but the one that really stood out is a documentary I did on Compton.  This is a part of California that has been notoriously known for years to have an extremely high crime rate as well as the most gangs in America.  I had teamed up with my boy Logic and a few other of our people from New York to take a trip to Los Angeles to attend a film festival.  While we were In Los Angeles I kept thinking about how Compton would look like if I went there.  I kept thinking how close I was to all the history that went on in Compton from the gangs, to the music, to the culture in general.  I decided I was going to take the trip to Compton while we were staying in Hollywood.  At the time that I asked everyone to take the trip with me to Compton, no one wanted to come with me.

Pulling in over 1.3 million hits the doc shows you not only going to the heart of Compton but also getting to talk to the people who described what its really like living in that part of Los Angeles

Now that I look back I totally understand why people are uncomfortable going to Compton based on how the media portrays the area.  Eventually one friend decided to take the trip with me so I grabbed my camera and we were out.  I remember getting off the exit to enter Compton and hearing sirens.  I tried to capture as much footage as I could while cruising through Compton.  At one point we arrived at the Compton Fashion Center which is also known as the Compton Swap Meat.  We got out the car and started to walk around.  The weather was real hot so we stopped in a store.  Me and my friend both had on New York Yankee hats and had no Idea not only were those hats considered Crip gang hats, we were also in gang territory.  One individual in the store asked us where we were from and we informed him New York.  He then told us I’m just letting you know that hat u wearing represents a gang hat, and rival gangs attack people wearing that hat.  I then asked the individual if he would say what he told us on camera which he agreed.  This individual was called Weezy Weez.  I informed him I was doing a documentary and I was glad he told us that information.  I ended up keeping in touch with this individual and eventually posted the video on Youtube.

To my amazement soon after posting the video “Compton LA” it got over 1 million views and hundreds of comments.  I decided to do a part 2 to this documentary which I eventually started.  I took a second trip out to LA and Weezy Weez introduced me to another Compton resident named Wealthy who showed me around town some more.  The connection that I built with these individuals caused me to see that the media has a big impact on how people think.  I plan on part 2 of this documentary to be powerful.  After visiting them a second time I decided they should see how New York life is like, and that’s exactly what happened.  A third individual named Irvin Cato who also is a Compton resident teamed up with the whole part 2 documentary concept and actually took the trip to New York City for the first time.  I was able get their views on how they felt visiting New York. This time I showed them around some parts of town.  I really feel once this part 2 documentary is complete it will be a masterpiece.

I guess you have a lot of material you’ve shot over the years which has probably never been seen, do we get to see some of those in ‘A Cliffy Barz Story’?

A Cliffy Barz Story will include and discuss some video footage that has already been released, as well as some video footage that has never been released.  There are some interesting video clips and Ideas I want to share with the world that has never been released.  It wont only talk about my experienced living In Harlem and being in New York, but it will talk about a lot of the behind the scenes stuff.  There are so many experiences from missing plane flights for film shoots, filming spring break, filming different states, Interviews, and so much more.

If you could, what would you say is the meaning of the Cliffy Barz story and what are the things you want to highlight in the film. What kinda messages will the doc offer viewers, especially aspiring doc and music video makers?

A Cliffy Barz Story Is a documentary film about myself which shows the obstacles a young black man and film maker goes through and has to overcome in order to accomplish his goals.  I feel sharing my story will inspire many other people not just in film but in every field or genre in entertainment or life in general.  Resilience is a word I truly feels describes me.  I grew up in a tough city called New York City where crime, racism, poverty, and police brutality is nothing new.  I also know many people in other areas grew up in the same conditions.  I feel we all have a story to tell, and I feel my story may motivate others to tell their story.  I believe each one teaches one, and that’s why I decided to come out with A Cliffy Barz Story.

When is the release planned for Cliffy, and where will the doc be shown?

You can expect to see A Cliffy Barz Story officially out in December of 2016.  I will have a 1 hour special airing the end of October 2016 on TV as well as online.  It will eventually be on You tube. The official TV series of A Cliffy Barz Story will air December 2016 into 2017.  I will also post highlights of the documentary and clips on my social media sites.  I must also thank you Carl Stanley and its greatly appreciated talking to you and LTW on my new documentary, keep representing the UK and doing your thing Bro!

Check out all of Cliffy Barz video’s on Youtube – https://www.youtube.com/user/CliffyBarz