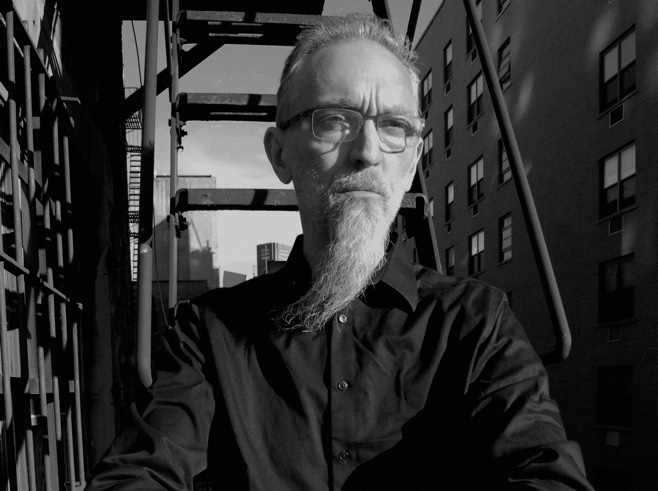 Norman Westberg has been a key part of Swans sound since virtually the beginning of the band’s iconic career.

He has been there through all their various sonic phases reinventing just what a guitar can do – making scary shrapnel noise or neo classical drones or distilled and distorted blues howl when required and it’s impossible to imagine the band’s groundbreaking music without him.

This month he released a solo album, 13, which further explores the guitar with seductive drones hypnotic meditative pieces and it sounds great. Originally released in 2013 as a hand distributed release and  limited to a mere 75 copies it has broken out of that ultimate cult collectors piece and is a neat counterpoint to his work with Swans.

This is a darkly hypnotic, ambient work that pulls you in with its unbearable lightness of being and is a compelling work.

LTW : The album is a thing of beauty. I’m fascinated by how you construct these pieces – do you hear them in your head or do you pick up your guitar and it flows.

Norman Westberg : About the construction and where the pieces come from. I will go in with an idea of where I want to start, as far as feel goes. I might concentrate on how one effect works with a part. After a few attempts to work out where I want to be in any given section, I will work on getting a smooth take. Then again, I may just pick up the guitar and lit it flow. There is always some of the serious improve going on.

LTW : I like the idea of you being a non guitar player guitarist – does this still hold true?

Norman Westberg : Early on I may have said that I approached Swans guitar as more of an ‘non-musician.’ I have never been a big one for musical rules. If it sounds right, or wrong as the case may be, then I do it. I have a limited vocabulary as fas the technical side of music composition. A bit more than naive, a bit less than schooled. I do consider myself a musician, though a fairly specialized one.

LTW : Your initial influences were the blues and public image/levene cramps/bryan gregory  I guess – it’s been quite a musical journey to 13 – could you talk about the initial players that influenced or suggested ways to play guitar and this journey to now

Norman Westberg : I am not the guy that sat around figuring out other peoples songs. Even while playing along with records I was aware that I enjoyed playing around the song, rather than playing the song. Of course, it helps to come pretty close to playing the song to be able to move away from it. I would practice with The Misfits Bullet EP, T-Rex Electric Warrior and Stooges Funhouse. Think that this covers a lot of sonic ground and allowed me to move around the instrument.
Watching Fred Smith play in Sonic’s Rendezvous was huge for me. He played deceptively simple and for the song. To me, it seemed that he didn’t play guitar, but allowed the guitar to speak through him. This is what I am trying to do every time that I play. I am still working at being completely at ease within my musical dialogue. I feel that I talk by my music, and am thankful that some people are understanding what I am saying.

LTW : Does the music you make on 13 and with Swans reflect how different your life is from the madness of those early NYC days

Norman Westberg : I feel more in control of what and how I play now. For the most part, I am playing about the same. Think that my experience both as a player and listener have allowed me to work out what I am comfortable playing. Maybe having gone through what you termed ‘madness’ has allowed me to relax a bit and enjoy the relative calm of today. I hope that my music reflects my zen state to a point that it rubs off on the listener.

LTW :  Is there much space for making original sounds on a  guitar these days?

Norman Westberg : Wow, original sounds on the guitar. Sure there is. It is up to the player to explore their heart and mind, and attempt to pass it on in the sound they make. I hope that people hear my music and say, yes, of course that is what it would sound like. I feel it is more a case of the individual player that offers a new take on the guitar, or any instrument for that matter.