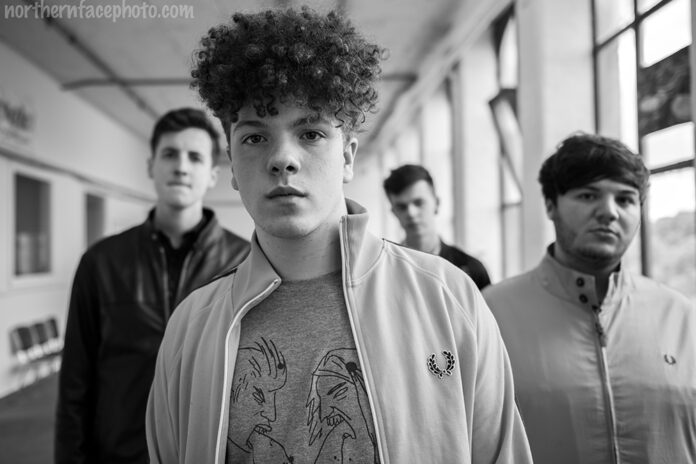 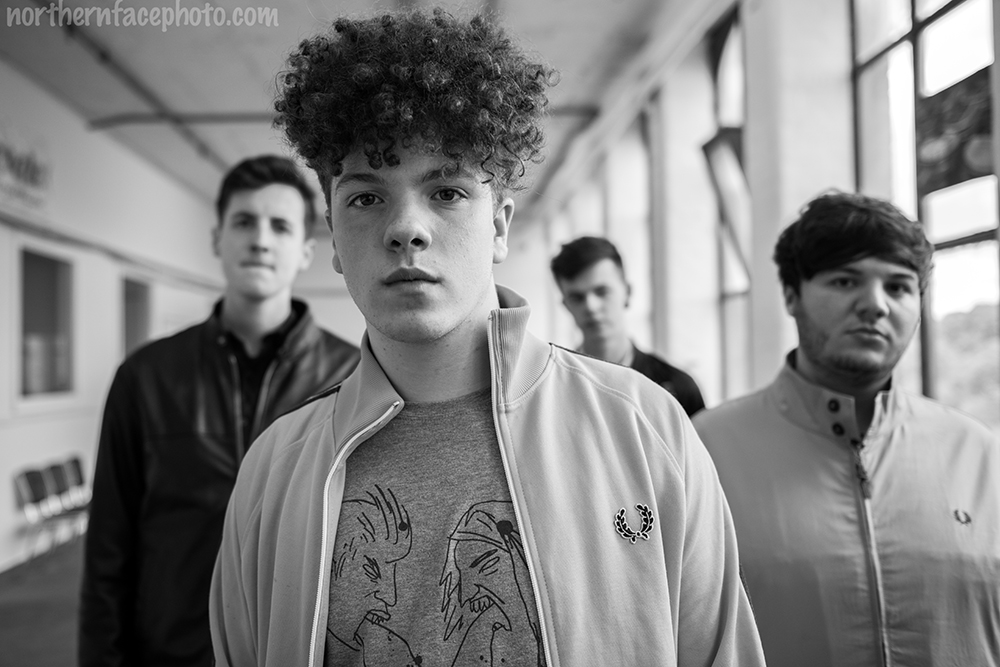 No Hot Ashes are a young indie / funk band from Stockport near Manchester – they have a penchant for the Red Hot Chilli Peppers and a morbid fear of heights! Nigel Carr caught up with them rehearsing their new single and reports back for Louder Than War below with photos by David Gleave.

Pear Mill is a colossal old mill in Bredbury just outside Stockport. It’s set in picturesque grounds with the river Goyt running alongside. The band are renting a rehearsal room on the 4th floor which also houses equipment belonging to Buzzcocks and Johnny Marr. We are here to interview them but also to take some shots using this historic building and it’s grounds as a backdrop.

Formed in 2012 No Hot Ashes have morphed from spiky Arctic Monkeys influenced indie to the full on funk rock ensemble they are today. This transformation has been gradual but the sound they have settled on is heavy bass infused Chilli Peppers meets James Brown with a rap / hip hop overlay. The combination is as infectious as it is fresh and in an era of samey local guitar bands of varying qualities, with the exception of Blossoms of course, they offer a rare chunk of vibrancy, sounding like nothing else coming out of the area at the moment.

Isaac Taylor, still only 17 is their prodigious lead singer and chief songwriter injecting his half sung – half rapped lyrical performance with an intense passion and soul, jumping around the stage, ripping his fingers bloody on the guitar strings. They released their first single ‘Goose’ b/w ‘Skank’ in October last year which was produced by Gavin Monaghan, production wizard behind acts as diverse as The Editors, Goldblade and Robert Plant – they are currently working on the follow up.

Louder Than War: Earlier songs like ‘Shoot Me’ sounded kind of Arctic Monkeys and ‘Goose’ starts up like The Stones’ Gimme Shelter but more recently there’s a lot of heavy funk in your writing.

Isaac: ‘We are massively in to James Brown and Parliament but we do retain a lot of influences from indie bands especially Manchester bands such as Joy Division, The Smiths. and The Happy Mondays.’

Have you now settled on your own sound?

Isaac: ‘We are getting there, the problem is we keep writing songs but we are a bit skint so we’ve not got the money to record all the songs we’re making, but we do have a lot of songs where we’re ‘right we’ve got a bit of a sound now’ – we’ve got the funk, the bass, the powerful drums with a sort of hip hop kind of lyric the way I say them and the way they go into the melody – we are definitely finding our way. We’ve been together for a while now, but we lost our old bass player to London – he went off to do an architectural course.’

Luigi: ‘I think the sound really started with the release of ‘Goose’ and ‘Skank,”

Isaac: ‘We had other songs like ‘Cigs and PG Tips’ and ‘WOB’ but they were recorded in a day and we are trying to get away from that softer more melodic sound a bit more towards more high energy stuff that we are doing a bit more. We’re writing all the time.’

Matt: ‘The bass player (Jack), is the most accomplished out of all of us – he was a grade 8 in bass when he was 14 – he’s 19 now – he’s an actual musician!, I’m at Uni now doing Electrical Engineering at Leeds, I’ve got a couple more lectures then finish – I drive so its not too bad but I’m here every weekend doing band shit but I’m failing my exams, but I’ll be alight – I keep thinking of packing it in and playing in the band.’

When will the next new tracks be coming out?

Luigi: ‘We released our first single and then spent all the money then we started saving up again and now its getting to the point where we have booked to get back in to the studio.’

Isaac: ‘We wanted to release hard copies not just digital downloads so you need extra money to produce them. Then you’ve got the studio time which is going to cost about £500 then we’ve got to stay in Wolverhampton where the studio is, so that cost a couple of hundred quid.’ 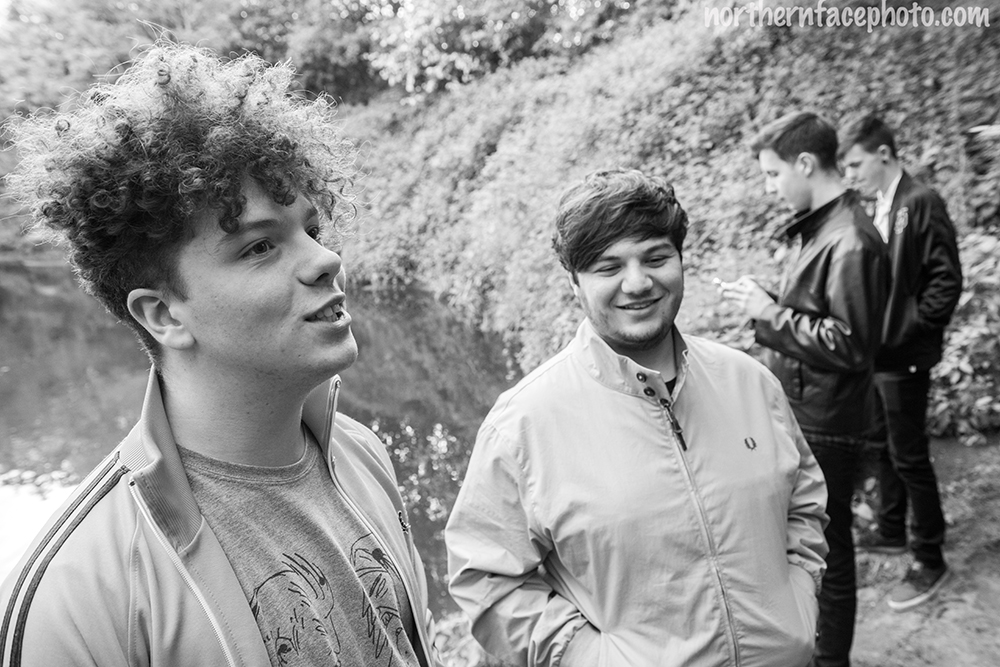 You’ve got a big name producer working with you?

Isaac: ‘Yeh, Gavin Monaghan from Magic Garden Studios – it was good to get him on board – he messaged us and said he’d like to record us.’

Luigi: ‘I hadn’t heard of him so I asked him what he’d done and he said The Editors and I just went ‘Oh Right”

Have you got some festivals lined up?

Isaac: ‘Yeh that’s the main thing, we’ve got a few big festival like Kendal Calling and Tramlines. Then we’ve got some more local ones like BL9 in Bury with The Happy Monday and Echo and the Bunnymen. (This has now been moved to Manchester event city – more about it here)

Luigi: ‘Peter Hook and the Light are on as well’

Isaac: ‘We’ve got The Blackthorn as well and The Enemy have just been announced as the headliners for that – that’s another local one in Compstell, Romiley near Stockport on the 26th July.’

How about Leeds and Reading at The BBC Introducing Stage, something like that?

Luigi: ‘Yeh but when you go there its not in a good place and people are just passing by and it doesn’t attract a big crowd. They put you right near all the kebab shops.’

Isaac: ‘BBC Introducing haven’t really caught wind of us yet, I mean we’ve been trying and we keep uploading and they say ‘Yeh you’re on the list’ – and there are bands that have been around like 7 weeks and then we’re not so’

Matt: ‘The new single that we’ve got Easy Peeler will do that.’

How do you dress, when we saw Blossoms the first time they had a unified look with black jumpers and pendants but they have kind of ditched that now?

Isaac: ‘Well I’m not going to slate anyone at all but we have seen a lot of bands all dressed in black like Catfish and the Bottlemen but we’ve never been about that, Funk’s not about that – I mean I’m in a bright orange Fred Perry jacket and I don’t wanna wear a turtle neck. We have some YO backing as well, (Your Own Clothing), and they have given us some free shit which is good.’

You’ve been cited as one of the top 20 Manchester bands, how do you feel about that coming from Stockport?

Luigi: ‘Everyone knows Manchester and there’s a link but – I mean Joy Division’s Ian was from Macclesfield, Peter was from Salford and they were ‘Manchester’.’

Isaac: ‘You can say what you want, it’s like I mean Manchester is where the scene is do you know what I mean? You go to Manchester to gig, everything’s in Manchester, there’s now’t in Stockport apart from the fucking Guild Hall that you can play or The Bungalow club or The Blossoms pub.’ I’m no Liam Gallagher – I’m not as cocky as him and not as overly confident as the Gallagher brothers. I’m confident in what I’m doing but I’m not an arsehole, that’s what I’m saying.
We’re pretty loud, I mean half of it’s in the live shows – we jump around a lot. We played at the Cinnamon in Bowdon but we’ve not played a gig that weird before, candlelit with everyone all sat down. The management said – ‘You’re going to have to turn it down, we have a Salsa class downstairs!’, but the one after that at The Castle (In Manchester’s Northern Quarter), it was a brilliant gig and the sound was amazing – we sold it out but the stage wasn’t big enough for us – I jump around’

Matt: ‘He rolls around the floor as well!’

Isaac: ‘I don’t use a guitar pick as well, sometime my fingers will start bleeding on stage and I’ll head butt him, and he’ll head butt me. There’s definitely a punk element as well. A big punk aesthetic with the funky indie poppy tunes. I’m pissed off about something, I dunno what! I’ll bang about the stage.’

Who writes the songs and where do you get the inspiration for your lyrics?

Isaac: ‘The lyrics and the melody that’s all down to me. I mean it pisses me off when they try and write for me. We structure the songs, me and Matt and we’ve always got a good bass line no matter what we do. I mean I couldn’t write all the music – they get pissed off when I go on about politics’

When you look at who’s written a song its always the guy that comes up with the melody that gets the credit unless as in the case of Lennon and McCartney they shared writing credits on everything even though they each wrote on their own.

Luigi: ‘Lennon and McCartney got credit for songs but it just works best the way we do it. A singer will write a song and he’ll know what he wants it to be about and if he’s given lyrics it’s like ‘well that’s not come from me’. A lot of it comes from a guitar riff you know? Everyone then chips in. I mean if any singer goes, ‘I write everything’ then you’re not a band are you?’

Luigi: We were talking with Gavin, the producer, and he was talking us through the music royalties and he said ‘the biggest piece of advice I can give you is just split it – save hassle, don’t lose friendships and split it between the four and enjoy whet you are doing’. Its like the Smiths’ Joyce and Rourke – if they did fuck all then that’s a different story.’ 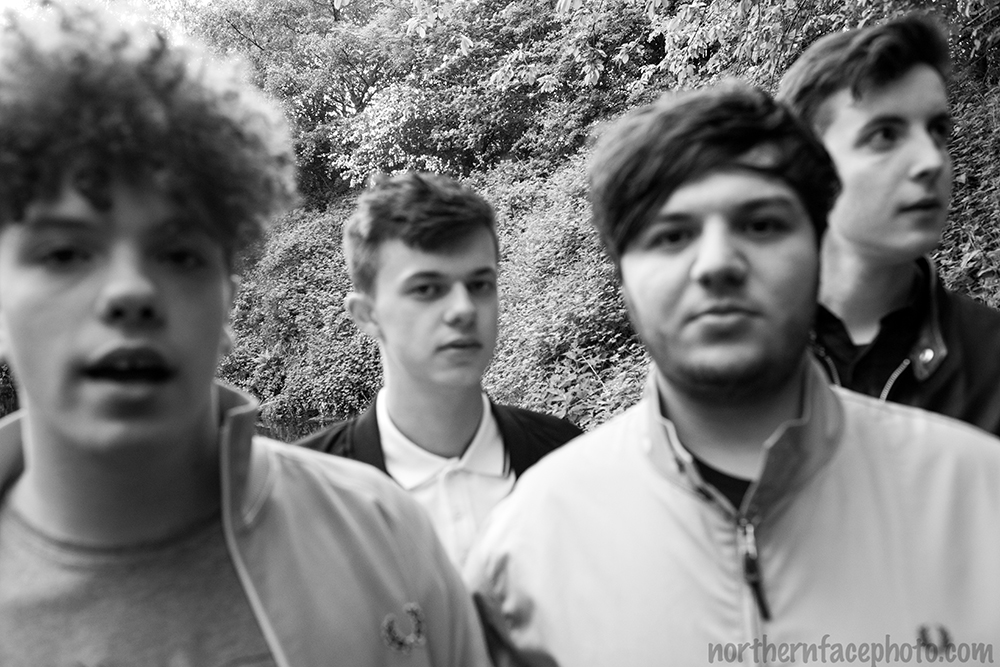 Dave, the photographer attempts to get the band on the outside staircase of the fourth floor at Pear Mill for some photographs but it was clear at this point that vertigo had set in!

We headed in to the rehearsal studio to hear ‘Smooth’ the b side of their new single ‘Easy Peeler’. You can hear how the band has matured in to what is their core sound of heavy indie pop funk. The rhythm section of bass and drums is the tightest you’ll hear with great guitar work from Luigi and explosive vocals from Isaac.

‘Easy Peeler’ isn’t finished yet but if its anything like the b side then we are in for something pretty special. The band are heading back in to the studio on August 13th and the single will be released on September 5th with a special launch at the Kraak gallery. If you get the chance then go and see them during the summer, you might just catch them before they hit the big time!