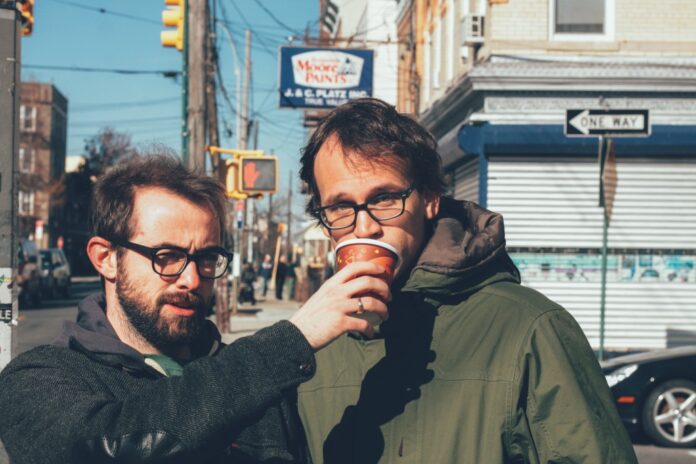 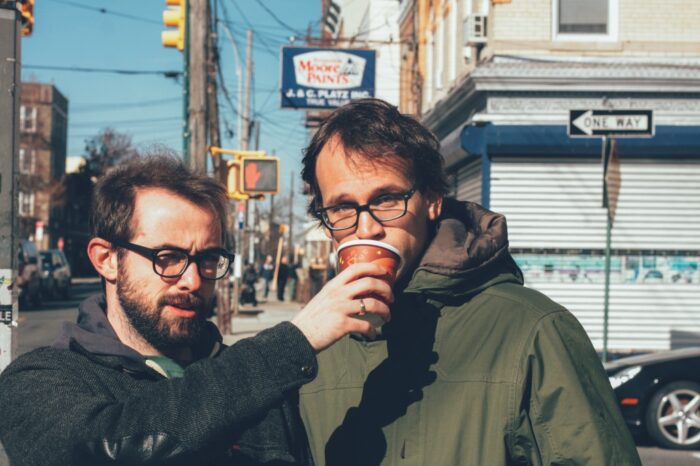 New York lo-fi duo Frog talk to Louder Than War’s Dave Beech about breaking through, Stanley Kubrick, and the fetishisation of both the UK and US.

Though Frog’s debut album was a subtle master-stroke , its title did little to hint at the quality contained therein. Built around narratives inspired by sleepy suburban America, the Star Spangled blood that runs through the album isn’t patriotic, as one might assume, but is instead nostalgic, wistful and even cynical. Conjuring images of diners, drive-in movies and Golden Age starlets, this appreciation, or romanticisation, of their country is something present even on their lesser-known debut EP; tracks such as ‘Nancy Kerrigan’ and ‘Arkansas’ providing the Americana flavours in that instance. Interestingly enough, however, despite the band’s obsession with their native country, it was a writer at the Bristol-based GoldFlakePaint that initially drew attention to the band followed swiftly by a piece from London’s Line of Best Fit.

With more interest in the UK than State-side, it makes sense that British label Audio Antihero have just reissued the aforementioned EP, hoping to capitalise on the reasonable success of their LP back in May. Since both album and EP are understated pieces of lo-fi brilliance, we grabbed the band for a few words on why they think they’ve found footing over, the difference between US and UK crowds, and just why they’re apparently named after an amphibian.

Louder Than War: Hey guys, thanks for taking the time to answer our questions. For those who aren’t familiar with the band, could you introduce yourselves?

Danny: Hello! I’m Danny on the guitar! This is Tom on drums! We’re frog.

The name Frog doesn’t really give much of an idea about your sound. What’s the story behind it, where did it come from?

Frog is a sound on the Casiotone 101 keyboard Tom got for free for painting his middle school. He found it in a locker. The ‘Frog 13’ sound is completely unusable in practice or in performance, so we named our band after it. It sounds a little like a wet blanket on a sitcom.

You’re about to reissue your self-titled debut EP, which went ‘largely unnoticed’ first time round. Do you think more people in the States will take notice this time, now you’ve an LP behind you?

People in the States are wonderful people, but they seem to have no use for a couple cuties in skivvies playing rock songs. We stand by all our songs, they still sound good! We were pretty new to this whole thing when we started, which is both a good and bad thing, and it shows. People in the US will probably politely greet more music by frog as they would an acquaintance at a party that you can’t remember the name of, a “Hey! How are you?” before nodding and smiling blankly, inching towards the bathroom.

It’s only been a matter of months since you released your last album, Kind of Blah. What was it that made you think about reissuing the EP so soon after the LP?

This was Jamie’s idea! Think he wants to milk us for all we’re worth, which to be frank doesn’t seem to be all that much. Sounds great to me though! The tapes look incredible.

It was a UK publication that first drew attention to the release, do you think you’ve found more of a footing here in the UK? And if so was it because of that review?

There seemed to be a small group of friends in Bristol and London that all decided that we were interesting enough to write articles about when we self-released the EP the first time, and coincidentally many of them owned music blogs and record labels. I have no idea how this happened. Tom at GoldFlakePaint is an incredibly enthusiastic supporter and his review is responsible for much/all of our subsequent support/career moves. That guy is a champ.

Similarly, a lot of your lyrics are interested in American pop culture and the culture of decades past. Do you think such references speak to English audiences as much as they do American audiences? And if so why?

English audiences seem to fetishise America for much the same reason that Americans fetishise the English, because they’re similar, but very different. And so far away! I’m not really sure if they get all the references I make, but maybe someday they’ll search the lines in google and be disappointed that I’m fairly illiterate.

You’re not too far off the beginning of a UK tour, how do you think the crowds over here will compare to those in the States?

The hoards of crowds screaming our name over here in the States (my mom and dad) are going to be tough to beat, but it’s a good thing that my mom and my dad are both going to try to visit my brother in Spain during the tour so they can catch one of the shows. So! All of the crowds in the UK will conceivably also include all of the crowds we currently play for here.

You’ve quite a diverse set of influences, not all of which are musical. How do the likes of Stanley Kubrick for instance, influence your song-writing?

Kubrick is a king! What a dude. I was watching all of his films while I was making the record, and I think that his approach to movies was a major influence. He pares down the elements in every scene to only those that are necessary, especially in 2001, and I found this to be very powerful and decided to try to imitate it. I failed, but it gave me something to talk about in future interviews! Thanks Stan.

Finally, with the release of the reissue drawing closer, what can we expect from Frog going in to next year and beyond?

Frog will go to the UK and slay. Frog will come back to the US and sleep. Frog will come out with a new record as soon as conceivably possible. Frog will make sure to brush her teeth every night, except when she is too lazy/drunk, which to be honest happens to be most of the time. Frog will wake up on time, and look at her phone in bed until she is very late and has to rush. Frog will take the M train to Broadway Lafayette and walk to work wondering what she’ll have for lunch. Frog will be disappointed by her sandwich, but eat the whole thing. Frog will be embarrassed by her answers in all future and past interviews, and will never read them. Frog will meet you after a show and shake your hand, if that’s what you want, but not until she says something that makes you uncomfortable. Frog will cringe, many times, and then make a gun shape with her fingers and mime a suicide attempt. Frog will probably have kids in the next two years, and that’ll be crazy, bro. Hope you had a good interview! I did!