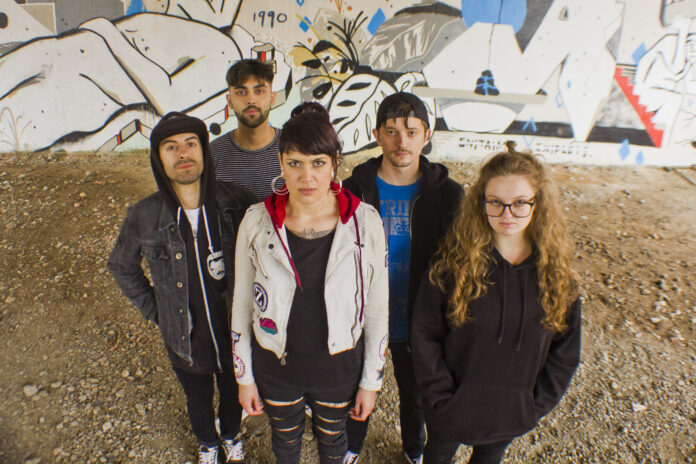 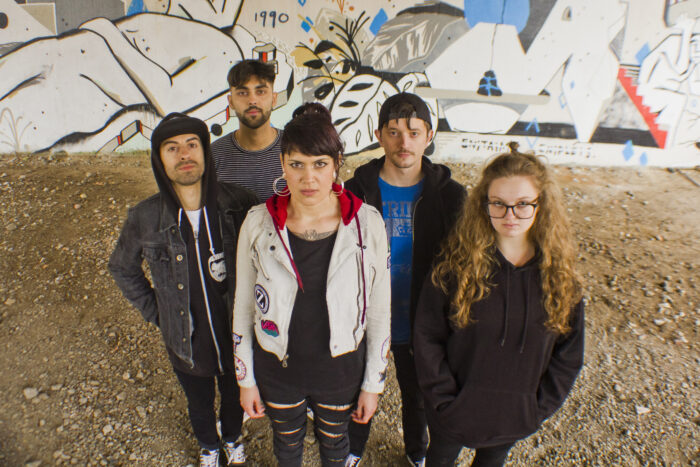 Millie Manders and The Shutup’s blend of ska/punk and high energy shows have always been a hit at big festivals like Rebellion but their album takes a more direct route sonically and lyrically.

Telling Truths, Breaking Ties is also the result of having a more settled version line-up of The Shutup, allowing Millie Manders to craft more ambitious songs, and the raucous new single Panic is a timely warning about the climate emergency and the evils of factory farming.

“To begin with I wanted to do a song that had a kind of a Skindred feel to it,” says Millie Manders from lockdown.  “I wanted something that was really punchy, had bounce and could get a crowd moving, but I also wanted to write something that was relevant to the environment because as a band we’re all very conscious of our impact on the planet

“I feel like although I wrote this song and the lyrics well over a year ago now, it was written during the time of the fires that were going on in Australia.  It’s horrendously scary the destruction that we’re seeing across the planet in various forms, and it’s been highlighted by the fact that the planet healed so well during the first lockdown. The idea that it might go back to that in any shape or form is just to me a horrifying idea.”

Anyone who looks back at the band’s YouTube videos will see that brass and ska influences have played a big part in shaping their sound, but while that is still there the new tunes are a lot heavier.

“I’ve always loved some metal music and stuff anyway, and with every release I have tried to incorporate more influences from my background, or from my musician’s background, so it was natural for us to start doing some heavier stuff.

“I think certainly with the subject matter of Panic it was intentional and relevant to have something that was a bit more in your face. I wanted it to be a slap in the face to try and wake some people up.”

Like many musicians, the chaos caused by the pandemic has not made it an easy road to getting their album out, especially when you are running the business side too, so how did the band’s current five-piece line up come about?

“I had a previous band that fell apart for legal reasons with a bad record deal, so in 2012 I went solo touring with just a guitarist for a year and a half, before I started using session musicians and really exploring my band sound,” recalls Manders.

“I was writing everything, and hiring session musicians in to help me collaborate, or form the sound I was looking for. In 2014 I found Alex, my drummer, but actually he found us. I’ve had several line-up changes so Don joined us in 2016 on trumpet and sax.  James on guitar has now been with us two years and bass player Georgina about a year and a half.

“This line-up wrote the entire album and their parts with me. It feels like the most solid line up I’ve ever had and it feels like the most creative. Certainly, we have a real camaraderie and community within the band now so I can only see that getting stronger, which is lovely.”

The new sound is also about a decision the band took to radically change the way they were recording their material and invest in songs they believed were the best they’d written.

“I’d say it’s largely down to production as the previous EPs that we’ve done have all been home recordings. The Shut Up EP was a home recording that we sent to a really good producer, but they can only do so much with something that’s not been recorded in the studio.

“We finally went to John Mitchell for the album, who has worked with some of our peers like Enter Shikari, You Me At 6,  Lower Than Atlantis, and the heavier sounds that we actually desperately love so we were able to get more of that into the sound.

“I think if we had been able to afford to do that with the EPs it probably would have come across with a lot more energy and punch, so it’s been great working in a more professional setup.”

The other noticeable change is the very personal lyrics where Manders has poured her heart and soul into songs like classic break up tune, Your Story, that are based on hard won personal experience which for most bands is exactly where their very best songs start life.

“It’s incredibly important to me to be able to be completely honest and I find that our fanbase enjoys hearing the real nitty gritty about things. The lyrics are very much from a very real place of experience, loss, betrayal, abandonment, but ultimately love as well. So that’s all in there, the bittersweet sadness of it.”

Ironically the lockdown as the nation battled COVID-19 that forced bands off the road came at just the right time for Millie Manders and The Shutup.

“As a personal thing it was actually very good for me to have lockdown because just before that I had a mental breakdown, I was signed off from work for a month, and I talk quite openly about it through songs and otherwise.“ notes Manders.

Having that time away from being stuck in a van with her bandmates eating crap food as they drive round the country to venues has afforded Millie Manders a chance to think about what really matters to her as an artist.

“It also opened up an opportunity for me to really concentrate on reaching out to my fanbase around the recorded music. Normally you don’t have much of an opportunity to do that because of the way the release cycle works, and especially as a DIY band you can’t stop.

“Actually, I think as much as lockdown is a horrendous event, and I don’t want to take anything away from how awful this has all been, from a personal standpoint it was beneficial to me for my mental health. It was actually beneficial to the band to connect with our audience in a completely different way.”

Once enough people have been vaccinated then bands who have been raring to get back on stage will be straight back out touring and that includes Millie Manders and The Shutup.

“I’ve always enjoyed the stage part of it because that’s my escapism, but actually I was in a really bad place for a good couple of years, I just didn’t realise how bad it was until I kind of broke.

“I’m in a lot better place now so think I am ready to go out to really enjoy touring and really enjoy connecting back with everybody. That was kind of proved to me when we did the two shows at New Cross Inn just before Christmas it was it was just so wonderful to be back in that environment.

“The whole band is raring to go and if we were told we were doing a 60 day in a row tour tomorrow we’d all be packing our suitcases right now.”

You can buy Telling Truths, Breaking Ties from www.milliemanders.com