There are probably more artists in New York City trying to rise to fame, than stars in the sky, but when you come across one that truly is a star, it’s a rare and precious find. It became more than a choice to speak with Mike, but rather a destiny. 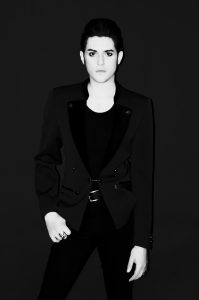 The 6 song EP, entitled No Rules About It, encompasses a swaggered variety of ballads, jazzy melodies, and powerful dance tracks, defying the genre barrier. An accomplished pianist and overall musician, Mike wrote all of the songs, several with the help of co-writer and producer Matthew Katz-Bohen, keyboardist of the iconic NYC punk-rock sensation Blondie.

I loved the fact that Mike although he has accomplished so much, was still so humble, thankful and innocent regarding his career, and what was in his heart. He was also very wise and extremely authentic. I also noticed that he was mindful of making sure everyone involved with him got the credit they deserved…

Louder than War: I’ll be honest with you, when I met you at Berlin, and you said you were a singer, the first thing that came to mind was, ‘you and everyone else in New York‘. Then I finally listened to your music and ‘Wow’, you can REALLY sing.

Thank you! Did you have a particular song that you liked?

I Feel You, the one you originally wrote for Debbie Harry and Sting to sing together. You have a smokin’ career ahead of you.

Yea, that’s definitely the more punk rock one of the bunch. I don’t know where I’m destined to be as far as my original music goes, but I was talking to my producer Matt about this when we first started recording.  Ultimately, I just want people to enjoy what I’m creating. If I am mildly successful with it I will be really happy to just have a small fan base that follows me.

I understand you love London as I do, and that you have a cool London story explaining why you began doing your own original songs?

Well until now, I had made the focus of my career playing for other people. I was always busy helping them build their original projects.  To be honest, I really did and still do enjoy things like that.  There’s not one regret.  I always try my best to understand another artist’s vision and help them expand.  I give my heart and full attention to everything I’m involved in and whoever I’m working with.  In the end, I like to see their musical dreams come to fruition.  When it came to my own vision for original material, I started to realize I could never find the time to see anything through.  What wound up happening is, I went to London with my very talented friend Miss Guy of The Toilet Boys.   We were traveling for some DJ gigs as well as to meet up with Blondie for the last two dates of their 40th anniversary tour.  I wound up at a fashion week after party for Vin + Omi with my friend and producer Matt.  Debbie always wears their amazing outfits on stage, so everyone was invited to hangout and chat for dinner and drinks.  Blondie’s tour manager at the time started talking to the group of us about up and coming English bands and how I looked like I belonged in one of them. Then he asked if I had any music of my own. I told him I did but that it’s never been recorded or anything like that.  I realized I had nothing personally identifying to show as a musician.  From that moment on my energy really started to shift.  When we all arrived back in the states I received a phone call one morning from Matt, he started telling me I really should consider doing original stuff, and the rest is history.  I trust him with everything, he has such a genuine heart and is so incredibly talented.  In my mind I thought, now’s the time.

What do you do when you’re not doing music?

I feel like everything I do involves music or entertaining, so that’s hard to answer.  I teach, I’m a professor at Marymount College.  My dear friend MaryAnne Piccolo and I piloted a pop / rock performance class in the schools theatre arts department with help from musical theatre coordinator Patricia Simon.  I really love the school and the students, it really is a fantastic program.  Other than that, I DJ and sporadically work in nightlife.  Honestly, being a freelance musician is still very much a part of my life.  It’s been hard the last year with time, but I still try to be involved with other people and their projects when I can.  Most people know I enjoy being involved with tribute projects, there is so much to learn from playing music by legendary artists.  In fact, I co-own a production company Damn The Light Productions, where our main focus is building pro level tribute shows.  We send them out to cruise ships, casinos and regional theatres.  It all keeps me very, very busy.

Where do you hope to be in 10 years musically?

That’s far away. In 10 years for me I would hope to be really grounded with a fan base and people who simply enjoy what I am creating. I think I’ll be really happy if I have that inspiration behind me to keep writing, keep playing and performing 10 years down the line.

When you write a song what are you thinking about?

A lot of different things. There are a lot of songwriters that write things so quickly. They can turn at a song in a day. I take a long time with my lyrics and I take an even longer sometimes with the music. I jot down ideas throughout the years, save recorded ideas in my phone.  I gain inspiration from everywhere so I have to always have something to hold my ideas for me until I can further explore them.  My songs are about so many different people and situations.  Things I quietly observe or personally experience.  A lot of the songs on my EP are combined feelings about different people and moments in my life.  It kind of encompasses a lot.

If you could wish for anything to happen on stage, what would you need?

An audience. That’s number one. No one likes playing to an empty room, but we’ve all done it. I think that what I need to have is my band. I appreciate the stage support and the people that are surrounding me.  It’s important to have good people with you. I have a set of amazing musicians that I respect very highly.  So that’s definitely the number one thing I need.  Other than that, I like my shows to be energetic, sensible, fun… just a good time.  If all of that’s going on, it’s happening!

You’re a new addition to a crayon box, what colour are you?

I’m colour blind by the way. In the spirit of my EP, I would say No Rules Red.

You’re 100 years old, what are your last words?

That’s a hard question to answer now because I feel like my answer would very much change after living for 100 years on this planet experiencing so many things.  I’d probably be a lot wiser than too.

That’s a great answer. Where can people buy your EP?

It’s available to stream on Spotify, Apple Music and Amazon.  You can also buy it on iTunes, and CD Baby.

Where is the very next place someone can check you and your music out?

I have a show at the club Berlin in NYC on Saturday, August 19th. I’m actually going to be playing some new material at that show. Miss Guy is probably going to be DJing after.  It’ll be a big party!  I’m pretty excited for that. Right now, I’m in the studio working with my producer and we’ll be releasing a single in September called Mysterious.

Debut EP No Rules About It