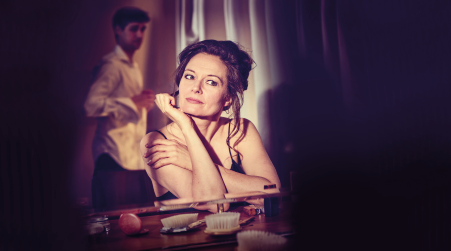 Mic Pool has been a theatre sound designer for more than thirty-six years winning a Tony award for his work on the Broadway version of The 39 Steps and landing a Olivier nomination.

Theatre lovers only notice poor sound design when it jars with what is happening onstage, and Mic knows his trade is one that is seldom noticed, but incredibly powerful.

“It’s the stealth weapon as I think audiences in this country are more visually acute, and like to discuss what the production looks like so quite often you can do a lot in the sound with people even registering it,” notes Mic. “That’s the world that is on stage, so they think that is part of that world, and that’s good that people are not analysing it too much.”

Pool has been involved with more than 250 productions at West Yorkshire Playhouse, but with this production of The Graduate there is a Dustin Hoffman shaped elephant in the room.

“I think the main challenge is that it is better known from a previous incarnation with the Mike Nichols film, and also there have two previous productions on Broadway and in the West End so there are a whole lot of preconceptions about it. The challenge is to do something that is unique to our production, but still make it an entertaining night out.

“When it was originally mooted I think there was an assumption it would be Simon and Garfunkel songs and almost a spot the intro competition of early sixties hits. It become very apparent that when I was talking to Lucy Bailey who is directing and designer Mike Britton that they were going for a much more stripped back approach.” 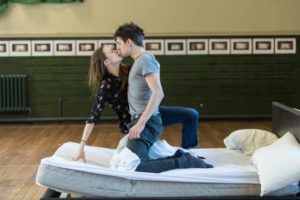 Britton has come up with a simple set, around the bed where the older Mrs Robinson, played by Anne Bancroft in the 1967 movie, seduces Hoffman’s naïve Benjamin Braddock to the sounds of Simon & Garfunkel. The new set design places the action in the early sixties just as American’s cultural and sexual revolution begins to kick in, and Terry Johnson’s adaptation looks back to the original novel as a source.

“The big decision was are we going to use Simon and Garfunkel, and are we going to use iconic sixties hits and we very rapidly came to the conclusion that we won’t going to do either of those” reveals Pool. “The main reason for that is it seems counter-productive to put so much effort into creating the world of our production, and to create characters, to then have a situation where as soon as you set that up you yank the audience somewhere else entirely.

“As soon you play that music it is associated with images in Mike Nichols film so that is where people’s heads are going to go.”

This is where experienced and creative sound designers like Pool really come into play taking tough artistic decisions about the music, and then offering alternatives that influence the mood on and off stage.

“Having got rid of the Simon and Garfunkel we thought are we going to do sixties hits so we were playing songs that been used in previous versions. What was interesting about that was you didn’t get images of the film flashing up, but everyone was getting completely different images.

“So if they were alive in the early sixties – as I was – it would take them back to events that happened in their lives and if they weren’t it would them back to when they first heard it. That was more dangerous than Simon & Garfunkel as you would then have 500 people sitting in a theatre all going off in completely different directions and away from the act of storytelling.”

Whilst The Graduate is famously about Benjamin’s affair with the alluring older Mrs Robinson it is also about a generation of aimless young men trapped between the cosy Eisenhower years and the exciting new world of Jack Kennedy’s Camelot.

“We go back to the text so the first thing in the adaptation is you start with this very disillusioned young man so what would that sound like? When you listen to music from films from the early sixties you know if it is in the world of our play or goes in the reject pile. It’s more of a fifties world as the sixties has not really got going for Benjamin Braddock who has been up the East Coast in a minor liberal arts college.

“The really cutting edge stuff hasn’t really touched him, It becomes immediately apparent that great music is not part of his world as if he’d gone to the Blue Note or somewhere in in Greenwich Village, and heard any of this he wouldn’t have been so disillusioned.

“The aural landscape of his disillusionment is music played in supermarkets or elevators. We have various grades of lounge, or easy listening, right through from genuine elevator tapes – which we discounted as they are frankly terrible – right though to fantastic stuff like Stan Getz or Charlie Bird stuff which we are tending towards.”

The Graduate is a coming of age tale with a twist so Pool’s job is to find sounds that illustrate Benjamin’s journey as he takes a road trip through California and tries to find himself in a world on the cusp of huge cultural changes he is often oblivious to.

“We eventually came up with a hard set of rules so we discovered there are no pianos in the world of Benjamin Braddock as it just sounds wrong so if there is a Miles Davies line up without piano that’s fine. No clapping for some reason, which is quite difficult in that period, so that’s most of Dave Brubeck out of the way, and he’s not touched by the surfing songs. He’s not been touched by sophisticated jazz or the burgeoning political consciousness of the American folk revival.

“The trick is that the audience should just accept this is the world of the play, and not think anything is out of place, but we are actually controlling the whole temperature of the audience experience.”

Mic Pool has seen it all in his career so like all great sound designers has moved with opportunities and challenges offered by the digital age, which you might think would make life easier. but ironically that doesn’t seem to the case.

“The reason it is so difficult to do this sort of thing is the possibilities are infinite when you start and more so now. Forty years ago it was stuff you knew, you had access to a record library, so you had a field of about 400 albums.

“Then when you have access to virtually everything ever recorded to audition instantly you have what I call the curse of infinite possibility. There’s nothing you can’t do as every possible resource you need is on your laptop.”