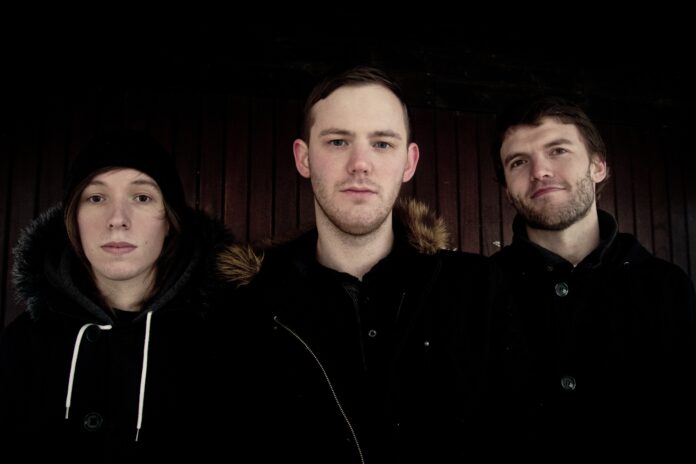 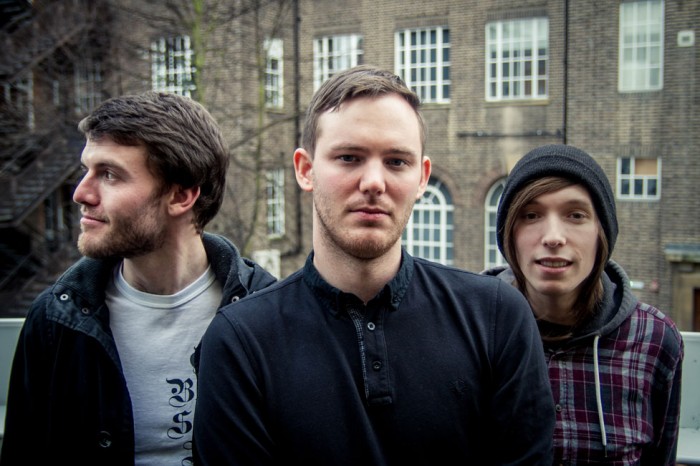 The Tangled Talk band Maths talk to Louder Than War’s DB Schenker about their new EP, their music and what it’s like having relatives in band’s such as Conflict and The Vex.

Maths – the thinking man’s Architects – appeared to have vanished from the scene after 2009’s Descent. Many thought and assumed that this blazingly intelligent three piece had split and their unique, reflective brand of screamo was no more. It turns out they were just on a prolonged sabbatical.

With a sharp and intricately layered new long player – The Fires Courting the Sea released this week on Tangled Talk, and a free shows at Birthdays in London and the Norwich Owl Sanctuary this weekend, we caught up with frontman Zen Zsigo to talk nostalgia, being a child of anarcho punk – and being a punk band that’s supposed to be beautiful.

But before we crack on with the interview, here’s Math’s new EP, The Fires Courting The Sea, as a full stream:

First off, what was the actual story behind the long gap since the critically acclaimed Descent?

“Basically we never split” said Zen “we went through a progression from starting the band, to wanting to play shows and make records, and doing whatever bands do – and then slowing down and stopping completely. And then starting a little bit again, and now we’re back to where we are now. There was never a conversation between us saying I never want to do this any more. It literally just faded out while we all got on with things in our lives. And then it all came back really naturally. The songs themselves have been around in one form or another since we slowed down a bit in around 2009 / 2010 I guess – these were going to be the next songs, and then we just had the break.”

Though released through Tangled Talk – home of Gnarwolves, Boxkite and Pariso – The Fires Courting the Sea is still a thoroughly DIY effort. And these things take time, particularly when your three members all live in different cities, two of whom have professional jobs and mortgages. And even longer when the music itself is as intensely personal as this clearly is.

“I’d already written the lyrics and had the theme of the songs in my head back in 2009 / 2010” Zen explains, “Each song is a time and a place with a very specific location. One song is Arizona, one song is Greece, another is Southend on Sea – each one is very specific and they are all my own personal memories, most going back to childhood. It’s nostalgia coloured with some negativity. But they still feel very relevant – they have such vivid imagery.”

“And we still do it all ourselves. Our guitarist Matt has made a pretty amazing job of making it all sound as good as it does, given that it was all recorded in different places at different times over the years. I think we could be mixing it and doing new takes and adding things and taking things away even now, but at some point you’ve got to say that by adding more you’re taking it away. It’s a pretty solid testament to what we have been working for”

This attention to detail and quality is reflected in the band’s cover art – and sense that the music is part of an artistic whole.

“All the art is done by my good friend Niels Geybels – he’s just incredible. As soon as we had the idea to do a new record, he was the first person I got in touch with, he and Andre of Tangled Talk. Our guitarist is a trained architect and he drew some of our early covers. We’re all that way inclined and have a good eye for something that isn’t going to look appalling in a few years time.”

Progressive as they are in sound, Maths still define themselves as punk. Which may also have something to do with Zen Zsigo being himself raised by a series of punks. The apple rarely falls too far from the tree, you might say.

“I think we’ve always said we are a punk band that’s supposed to be beautiful. When we first started it was meant to be a lot more melodic. I remember this actually all started when I posted on a local Norwich Message Board in 2006 that I wanted to start a hardcore band, like Orchid, Black Purr, Give Up the Ghost and American Nightmare. We’ve moved on a lot since then, but we’re basically still a hardcore band, although we’ve always called it a punk band that’s supposed to be beautiful.” 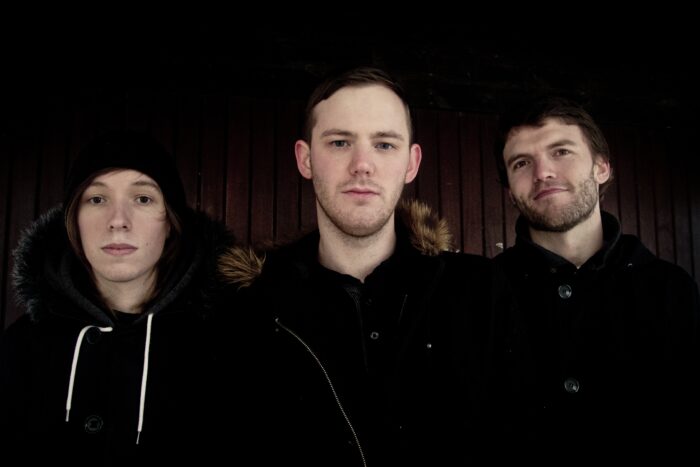 “My parents were involved in anarcho-punk and squat culture in London in 1983. My Dad was the singer of a band called The Vex, who actually had their back catalogue released an American label [Sacred Bones] last year. My godfather was the drummer in Conflict who also did stuff with Crass.”

“I was very young and we moved away, but I still remember being there and being around these people. When I went to school and I’d have religious education my mum would say to me that the teachers will tell you these things, but just keep an open mind. And it instilled this freedom in me. I’m 27 now, and all my life all I have done is make music and be however I want to be. I guess for me, and for us, punk is just the umbrella term for being free”

“If you trace the timeline of punk music, it isn’t that the punk bands are all the bands with shouting and the fast drumming or whatever. The punk bands are the ones with the freedom, the ones who are expressing new and interesting things, and using imagery that you have to think about. If you go back in the nineties you had Sonic Youth, all of this Japanese Noise music, German Industrial music – that’s all punk music. It doesn’t matter that one is electronic and is guitar based. And if we’re talking about the spirit of punk music – I think Copenhagen has got that more than anywhere. You’ve got IceAge, Lust for Youth coming out of there, so many interesting bands that are doing something new and exciting.”

And as to where their stylistic influences come from, it’s also not necessarily where you would expect for a band with such a heavy, guitar-driven sound. Maths are definitely not “math-core”, as Zen explained.

“I listen to a lot of ambient. I learned about keyboards and electronics before I learned guitar. I also do electronic and electro-acoustic, and I work a lot with cassette tapes and synthesisers. Tangled Talk asked me to make a Maths’ Spotify list, and none of mine is what you’d expect. I think you lose a certain amount of the broad sense of what is music and especially melodicism if you contain yourself.”

“We were playing heavy guitar music for four or five years before we slowed down, and it’s kind of part of you, and it still has a relevance. There’s a lot of bands that I listen to that trigger my interest in guitar music like Iceage. Which has a certain angst about it, something a bit cringy. But all the best stuff is a bit cringy I think, as it’s so open, so real.”

Like many of their peers, Maths have an intensity, but not the externalised anger of previous generations of self-identified punks. As a child of the anarcho-punk revolution, Zen has an interesting take on this.

“I’ve been watching programmes about the 80s recently, and the nineties and the last decade seems relatively tame compared to then, and compared to how things are now. I don’t watch the news, and my only update from the world is the internet, but I think there are similarities between now and the 80s in particular. That’s when my Dad’s band -and when Conflict- were angry because of those things.”

“I’ve never written a political song in my life. My natural inkling is to be a very inward person – all my writing is about inward things – and perhaps current events play a certain part in jogging a memory or making me think about certain things, but when it comes to writing my own music it has to be very personal to me.

Ultimately, and more importantly, what’s next for Maths? 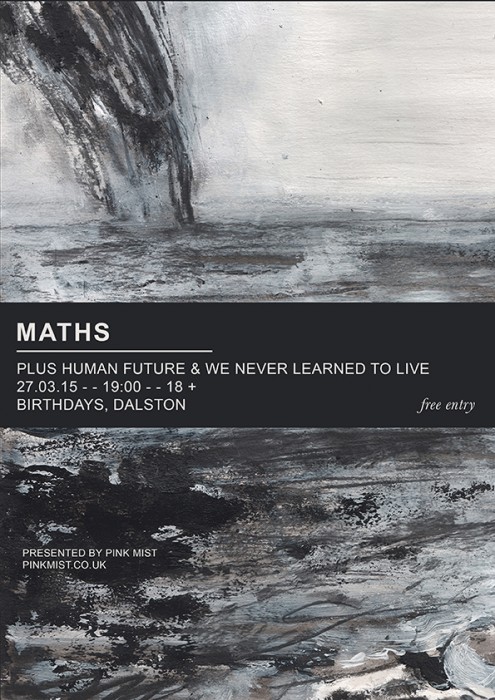 “It’s changing a lot, but the plan is that the record comes out on the 23rd  March, and the 27th we’re playing a free record release show in London – and 28th we’re playing a show in Norwich as a kind of homecoming, and then in May we’ have maybe 8 or 9 days of shows lined up. And then in August we’re going to try and do Europe for the first time.”

And, to close, does the long hiatus between their last full length release and  The Fires Courting the Sea have anything to do with them being perfectionists?

“I think we pretty much are.” Zen concedes. “In the other electronic stuff I do there’s a lot of improvisation, spur of the moment and experimenting. But that’s the difference between playing a noise show in front of ten people in the middle of Belgium and playing a punk show to people that know the words and that are actually interested in and invested in your band. We wanted to make something that stands up and is worth there being I don’t know how many copies out there.”

On the evidence of the twisting, emotional blaze of their new EP and the intensity of their live shows, it certainly deserves to be out there.

And it is good to have these boys back with us.

Buy the new Math’s EP at Tangled Talk’s website. The band can also be found on Facebook and Bandcamp.

Maths have two gigs lined up in the immediate future, one at Birthdays in London on Friday 27th March and one the day after, 28th March, in Norwich.