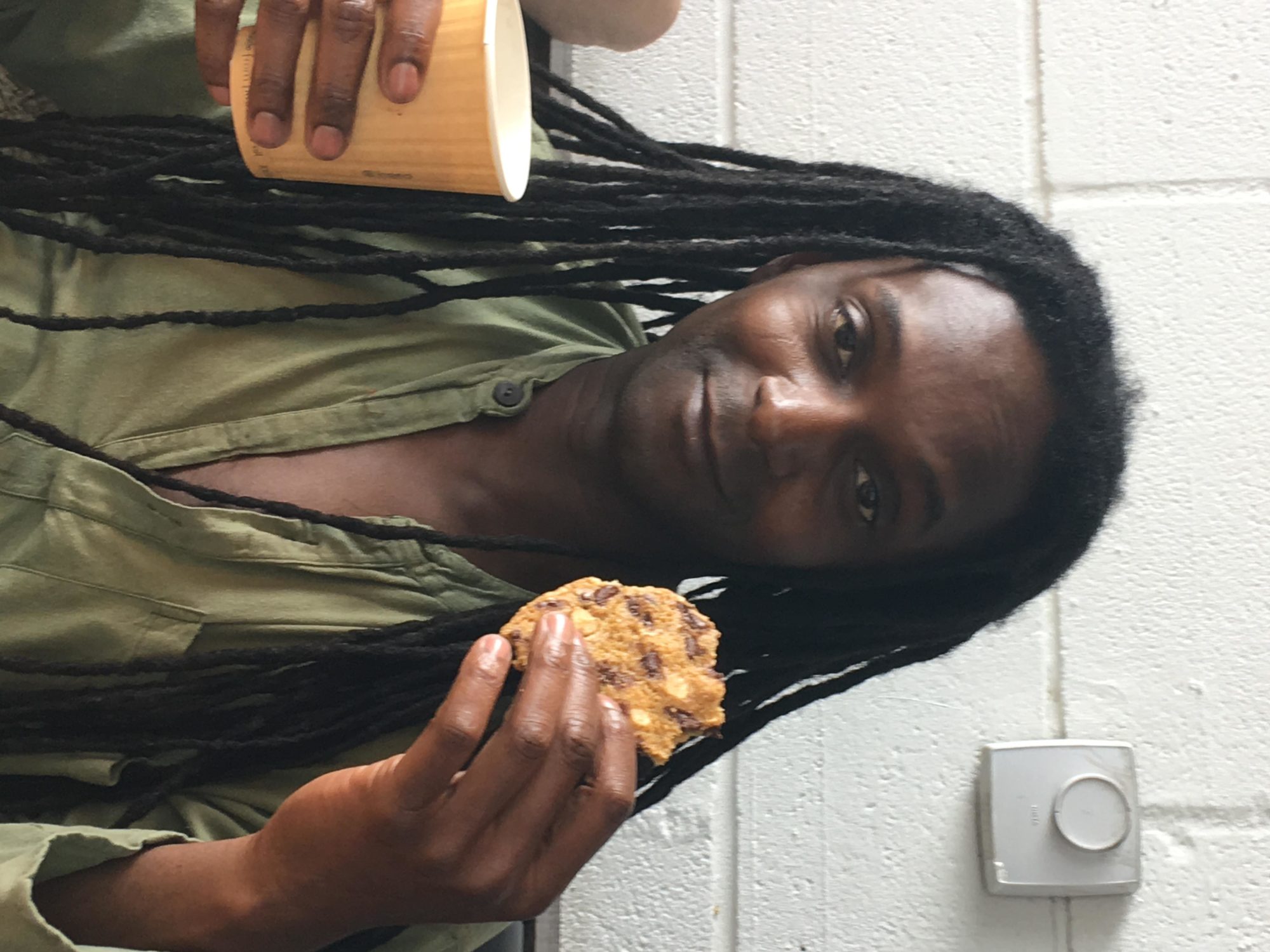 One of my favorite bands in the world is a musically diverse, multi-national, aggressively approachable, genre hopping, overwhelmingly talented faction called Mangoseed, currently unleashing their magic throughout the UK. They have an unusual and specially unique camaraderie that makes them seem more like family, rather than just a band. Musically they think as ‘One’ – one mind, one heart and one soul. 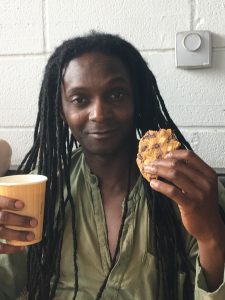 About to release the first single of two, I met the guys at their recording studio in Hammersmith, where they debuted their new songs for me. What I heard was two really big hits for sure. However that’s another interview for another time, upon the official release… this time we spoke about their most embarrassing ‘drunk’ experiences.

Louder Than War: What have you guys been up to since we last spoke?

Richard: We’ve been working on a new single, and have got a new video coming out. The song is called Burning. We got some fans to help to be part of the video, and they are some really cool workers. We are just amazing we have the best band ever! We are working on the next single that will be out, today, it’s called Stand Up.

As you are ready the music from that sheet of paper near your feet.

Karlos: You  know what I play. We just got back to meet each other from a long break. The first thing we did was actually work on a new song. I heard it for the first time today, started jamming, and then we just decided to play live in the studio. And it sounding coooool.

Nikolai: I sing things. Like Richard said we’ve been recording, or finishing the recording of the next single. I was in the studio last week with the producer Sam Dyson. It was really a recording session, we were in the studio for six hours just doing vocals, which we haven’t ever ever done. I think we did something like 20 vocal tracks, or some kind of craziness like that. 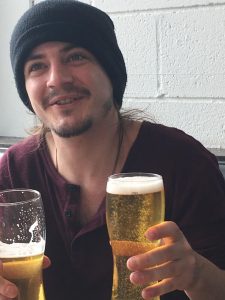 Nikolai: The plan is, to try and come to New York in the autumn. September, October time we’re going to come out to New York and play some shows. I was talking to a friend of mine a couple of months ago, and he lives in San Francisco, and he knows a couple of promoters out there. They heard our stuff and they like it. So we are in the stages of talking to them about going to San Francisco. Then we will be talking to somebody and we will also be going to Turkey to play. Then we want to go play in Germany with Sam. We’re just trying to figure out how actually to go through that.
Sam Campbell: The drummer from Ireland, who lives in Germany, with his other band, Hawks.

So Sam you don’t talk a lot, so what’s the drunkest you’ve ever been?

Sam: This happened quite recently, and it’s extremely embarrassing. So, there is an artist I used to work with called Maria Kelly. She’s an Irish artist. She was staying in our flat, because she does a lot of work with our guitarist in Hawk. She was staying in the spare bedroom and we all went out. We started drinking throughout the night, a bunch of us. They went home early because they had to get up for work in the morning, and I got in quite late. I think I stayed out till 6 AM. I got stupidly drunk. The next day I woke up and I said good morning to Maria Kelly in the kitchen. All she said was, “Hi Sam”. I said hi but I didn’t understand. So what actually happened, was, she was in bed. A drunk Irishman walked into her room. I have a tendency to sleep walk. When I’m drunk it’s pretty bad. I came into the room and she woke up. I sat  down at the end of her bed and proceeded to get undressed. As I stood up and pulled my pants down she said, “SAM”, and I woke up. I ran out of the room…I remember waking up and pulling my pants down.

Nikolai La Barrie(He sings stuff, and is originally from Jamaica, I think): It was New Year’s Eve. We were driving back from somewhere, and my girlfriend at the time was driving the car and I wanted to stop at KFC. I was really hungry. It was 6am in the morning and she asked me if I was sure I wanted to stop. I yelled that I was hungry and that I just wanted to eat KFC. So we went to the drive-through. She asked me what I wanted but I was kind of in between falling asleep and waking up. So I woke up, crawled over her, and leaned on the counter in KFC. So the girl was standing in front of me and I’m leaning over my girlfriend who’s back in the driver seat and I said, “I want…”, and I threw up all over the counter. Then it started spreading, and it’s going over to the girl. I started wiping the counter, scooping it up with my hand, and it’s falling on the car door, inside the car… It was the worst New Year’s day ever!
Karlos, you’re up

Karlos Coleman (One of the best lead guitarists on this planet, hailing from some Island, but refuses to give anyone the “Bump”): I don’t do the drunk thing.

Then you can tell us the most embarrassing thing that ever happened to you sober.

Karlos: Okay, let’s do the drunk thing… I know I’ve been drunk but I haven’t been vomiting and stuff like that. The last time I got pretty liquored up was at my friends house. Me and my mates that I went to school with hang out, we get drunk and we play Monopoly, reminisce about the past. So the Brandy’s coming and the whiskeys coming, and stuff is happening. Then I got the heats, and I needed some air and decided to go home. I composed myself and said goodbye, and I started walking home. It was only a 15 minute walk. I’m trying to guide myself pass the bollards in the middle of the road. Every time I started walking away from it I wound up walking in to it. I was bumping into everyone it them and trying to walk away from the bushes. Then I stopped to try to roll a cigarette and it started to rain. So there I am swinging back-and-forth, trying to roll a cigarette, the tobacco was getting all over, the  paper was getting all wet… And that’s as drunk as I get it.

Richard, I hope your story is better than that.

Richard “Everybody Needs A Richard” Hardy ( Born in Australia, raised in Jamaica, there are no words…oh yeah, he plays bass): I remember having two beers in my hand, with every shot. Then I remember trying to pick up two people at once, I didn’t succeed.

They were guys ( he showed me a picture of the evening).

Yeah, they were guys. The next thing I remember is I woke up in bed. I thought how nice somebody took me home. I thought it was lovely and that I had great friends. Then I find out that apparently I got so drunk I jumped over someone’s fence, and stole their dog. Then the dog ran away. I was trying to run after the door to get it back. Then apparently I jumped on top of a car and I wouldn’t come off. They had to drive home with me on the car, and I was trying to throw bottles at people.

There you have it, the drunk saga of the Mangoseeds. Still one of the best bands ever…check them out! 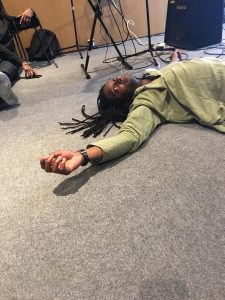