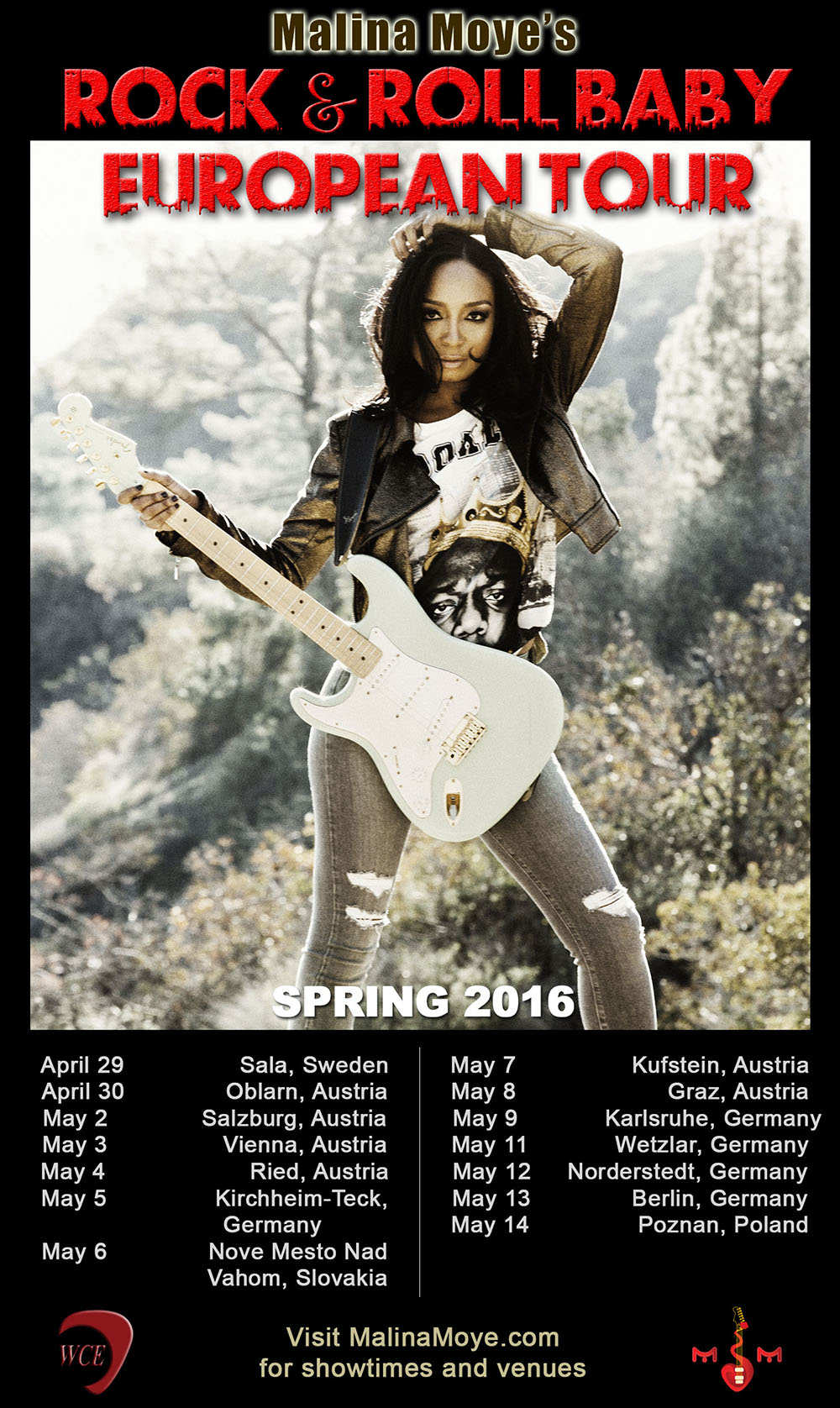 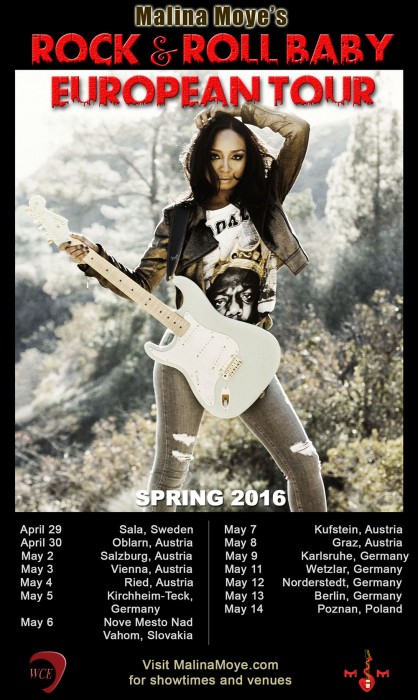 Someone positively explosive, and spiritually special is just a prelude to explaining the multi talented, left handed guitarist, singer, songwriter, and luminary star, Malina Moye. Celebrated as one of the 10 best female guitarists in the entire world, and hailed “a female Jimi Hendrix”, by “Guitar World Magazine”, Malina will kick off her “Rock & Roll Baby” tour in Florida, followed by a European tour in support of her new release, “Are You The One”

Malina possess a unique and exceptional positive energy, which had brought her to places she used to only read about, including India and London where she was invited to honor the Queen of England. However, it wasn’t always like that . She struggled, sleeping in cars, homeless, until her dream came true.

Louder Than War: Girl you rock. I love that you’re a left handed guitarist!

You know I come from a musical family. My mom and dad where in a band. I’ll never forget my father gave me a guitar, I was like 3 years old. I wasn’t feeling it. I would say, maybe when I was 9, I picked a guitar up. My father tried to make me play it like a right handed person, the correct way. It just didn’t feel right because I’m naturally left handed. When he left the room, I just flipped it up side down, and started playing. Then he came back and said, ” that is so backwards”. I said “but this feels natural”. When I got older my dad wondered why he just didn’t get me a left handed guitar…I said, “dad, I was a kid, that was your job”. The kicker is there are more guitars to choose from for right handed players, but now Fender endorsed me they’ll make me whatever I want….but you have to get to that level first though…

I watched some of your videos, of you performing live, and like “Wow”

I love your new video, “Are You the One”

Thank you, we had so much fun with that.

Did you write it?

Yes. What I like about it is, like a lot of people, when you start writing with other people, you start to come up with these good ideas. People start bouncing ideas off one another, and then suddenly you can just tell when there’s a magic….so we finally got the skeletons put together , and then you actually start recording it, adding more pieces….the kicker is this: with a video, the director is actually a film director that worked with Steven Spielberg, so he ended up directing this video for me, and my “Chaotic” video as well….I just remember him saying that he wanted to make it more like a film. I was like “I get that”, and with the music you start to add these different layers, and you just wonder do people understand …..do people see, are listeners also seeing, you’ve got the lyrics, you’ve got the R&B style in it, the rock style in it, the hook…..do you know what I mean? So I just really get into all that…..but when you go to radio, that’s a whole other animal. For certain formats they need certain types of remixes, so it’s quite interesting to see the remix that came from this song, and how it’s actually starting to catch. It’s making people go and start to discover the original version of the song, which I think is cool.

What was your influences growing up, did you love Jimi Hendrix?

Can I tell you something that’s funny? My dad always says that people always bring up Hendrix with you, but I never played any Hendrix. Seriously. Isn’t that funny? So what happens is that as you get older, and you really start to get into your instrument, you start to understand who was doing what with the guitar literally. But for me there were just so many influences, even as a singer, as a guitarist, as a performer, for me seeing Tina Turner, Prince, Michael Jackson, James Brown, and even looking at You Tube, looking at videos, just way, way back. Just to see the type of energy and power that these people would bring to music, it’s just unbelievable! The art of if. I think that is something we are so desperately missing and needing, the one thing that I just feel that I hope that I bring the people for them to see what I want to put in as an artist.

Thank you, as a player, as an artist that means everything to me. That’s so important. That is everything to me. What I notice from traveling all around the world, is that there’s something that’s so incredible when you perform music, something that’s so incredible when you’re doing something that’s in your element. It inspires people to want to do something that they like to do. There’s this new thing that I’ve been working with my team on. It’s  a charity called, ” Find The Great You”. I think that everybody has something that’s great about them, no matter what it is. I’m trying to encourage people to do that because whenever I get off stage and people will come to me, it’s so amazing how people say to me, ” after seeing your show I wanted to start a restaurant”…. I said ” you got that from my performance”? That’s amazing! I told them that they need to make that happen. Go for that, because that’s what I’m about right now.

Yes, you seem to have an energy that inspires people, I can see that in you.

Do you feel like you were born to play music, that perhaps it wasn’t a choice?

Absolutely. Some friends from like the third grade found me on Facebook. What’s crazy is, they told me that when I was in third grade I was always talking about “someday I’m going to be a famous singer”. I said, “I said that”? Then the kicker was that she said that I gave her an autograph and said to her to keep it because one day it’s going to be worth a lot of money. The kicker was that she took a screen shot, and showed it to me. First of all I don’t know if I’m embarrassed because I actually had the balls to tell her that, or the fact that she actually kept it. It was so funny, I must have been crazy. They said I was just so driven. This is exactly what I am suppose to be doing.

Well you have the talent, the look, the energy…you’ve got it going, the whole package!

Thank you, I appreciate it, but the thing that’s crazy is, just to keep working it and to keep challenging yourself …..and with the whole platform of social media, there is good and bad with it….I’ve never experienced that….I thought that means I’m moving to a higher level, when you actually find people who take time out of their day to just talk about how much they hate you. In my mind I’m like “OMG”, and one thing I always say is that I want to make people feel something, and I guess good or bad at least Its something. One thing I like to tell people is the reason I feel that everything is possible, is that I know where I came from. When I came here, I came here with $20 , I was literally living in the street, I would sleep in my car and put covers over my head with. Knife in the back. I would park in places where they said “Do Not Park”, because I knew that if I put a sign out , please don’t tow, car is broken, I knew that the cops would patrol it. So coming from that and then finding people who believe in you….I got really fortunate where I put together a business plan and I’m not gonna lie, this guy saw me and was surprised that nobody invested in me already. I knew I had to create my own lane. I thought maybe if I could do that it might open doors for other people. Low and behold the guy put up a half of a million dollars to help me start the label. So I started to really understand the business side of the music industry. There’s a music industry and then there’s the music business. For each moment in my life I’m just so grateful, because it is that hard.

I realize that from all my prior interviews, just how hard it is.  I still don’t understand how you musicians make money with all the streams and the free downloads.

Yeah. I was just having this conversation. For me now it’s just all about “brand”. I’m always telling everybody to enjoy what you really love. If you really enjoy it, you will make money. I’ve been all over the world. Places I only read about. I just came back from India, which was unbelievable. It was for the Mahindra Blues Festival. And then again, when you’re honoring “The Queen of England “, ….who would have thought this would be happening. Just imagine that at one point in your life, your looking on the floor for pennies to tape together to buy a sandwich, and then the next time in your life, you’re in a private plane, your literally landing on the ground in the UK, and they’re taking you to the top of a castle so that you can go and honor “The Queen of England”.

I live my life by the “Secret”.

The truth, I never really got a chance to read “The Secret”.  This is what it feels like, you put forth the effort, and you really believe, and then all of a sudden, you don’t even know how this happened. Thank you so much! For me it goes like this: you have so many people that you can spend your 50-60 bucks on to go to a concert. I’m so appreciative that you chose to spend it on me. If there was something that I could do to motivate or to help you, please tell me. This is so much fun, I don’t want it to end.