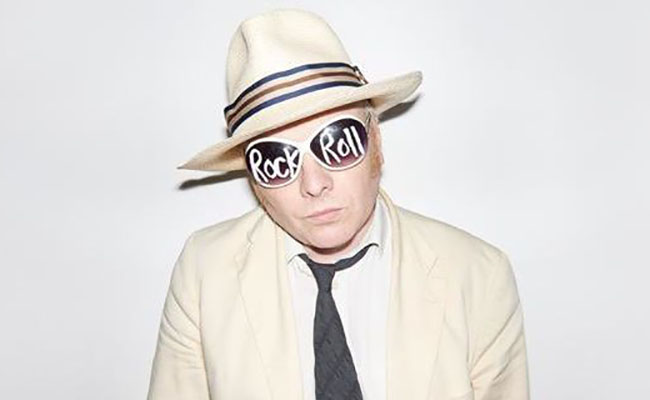 Luke Haines has just released  “Is Alive and Well and Living in Buenos Aires (Heavy, Frenz – The Solo Anthology 2001-2017)”. Ahead of a short UK tour, he took time to answer a few questions.

Was the anthology a suggestion of Cherry Red or did you also feel it was time to look back on your solo career ? What was your input in the track selection ?

It was a Cherry Red idea – a good one I thought. I didn’t realise there had been so many solo albums, gave it the title and saw over the artwork. I chose every track. Although there were a few I forgot about – The Broadmoor Blues Delta could have been on there…otherwise it’s pretty groovy.

In all the records you have put out as a solo artist, is there one where you wish you had done things differently ? Have you got favourites ?

I would have recorded the Oliver Twist Manifesto differently. I think it’s over produced – or a bit polite sounding. I should have been braver with that album, but I was out of my mind at the time. Oh, and the Christie Malry Soundtrack has awful cover art work. The sleeve was meant to be by Dinos Chapman but I didn’t like what he submitted. So I did the sleeve myself at the last minute… The wrestling album’s great and I really like British Nuclear Bunkers. No one else does but they’ll come round. No one liked After Murder Park when it came out. Now it’s everyone’s favourite.

You are well known for writing about unusual subjects, is it something that spurs you to write songs?

I don’t think my subject matter is that strange…it’s just what I carry around  in my head. I have too many ideas for regular albums so I compartmentalise them into concepts.

Your records have become wilder and more experimental. Are you tired of the traditional song format or is it just a way of recharging your batteries creatively?

I think rock music is really boring. Irony killed it years ago. We are in the age of content provider rock music. I believe in music as folk art and mysticism. You can do anything you want. I don’t understand why people don’t.

In recent years you have been playing both solo and with bands on some occasions. Economic reasons come into the equation but do you favour one over the other?

I have a really good band from time to time but they’re not always around or other people nick them. I’m quite happy playing on my own – it means I can go into a trance and summon up the rock n roll elders.

You recently started doing a monthly column for Record Collector Magazine on albums from your record collection. Is this something that’d you been wanting to do for a while or was it writing both your autobiographies that gave you the impetus to write about other people’s music ?

Have you still got some concept albums brewing in the back of your mind or have you finally put this phase to rest ?

What can we expect of the shows of your upcoming UK tour ?

I shall be playing a shitload of songs from the anthology. At the London show I will be conducting a seance and hope to conjure up a choir of dead rock stars.

Luke is touring the UK this month.