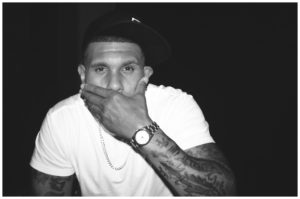 French-Italian songwriter and musician, Fred Colombo, has a new and dramatic EP out entitled The Road.

He talks to Eileen Shapiro about genres, music and future plans.

Colombo‘s music tends to be slightly dark, in the best way possible. He has performed all over the world with multiple bands encompassing multiple genres, from heavy metal to electronica. He has been solo for the last three years, and The Road proves that this was a good move.

Louder Than War: I love Kill Me, I feel like you seem to collect genres. Do you happen to have a favorite style of music?

Fred Colombo: My favourite style is …music! Really. I like to hear, play and write all genres of music. I’m excited and moved and inspired by all the different colours you can find in musics. Of course I’ve been spending more time listening and playing specific genres like triphop, progressive metal, electro, ambient music or jazz. But I really love them all.
It may turn out to be an issue when I’m writing songs, as I always feel like including a very wide range of influences and sounds, making it sometimes inconsistent. My biggest challenge is to put all my influences together in a smooth way.

Who were your musical influences, I bet you had a bunch?

Oh yes a big bunch of them! Let’s say my main influences, as a kid/teenager, have ranged from artists like Scottish composer Craig Armstrong to Japanese video game music composer Nobuo Uematsu, and from progressive metal bands like Dream Theater to triphop acts like Massive Attack or Archive.

Did you write the songs from your new EP, and do you happen to have one that you like to perform best?

I wrote and recorded all the songs from The Road. I enjoy singing Kill Me and Within, playing Out There as well. Quite hard to name just one actually!

Do you plan a tour to support the new EP?

Your songs seem to be a bit on the dark side at times, what are some of your motivations for them?

Well, I don’t start writing a song saying “ok this one is gonna sound dark as hell” or “let’s do a [insert genre] song”. You know, it just comes with the flow. It often ends up being quite dark indeed, but I would say it is absolutely not intentional! That’s just what comes to me. I’ve also been writing positive, sunny songs in past albums! So there’s no specific motivation. I’m just going where the music takes me.

You have performed all over the world, do you have a favorite place?

There are two countries where my live experiences have been more unique and memorable than anywhere else – the USA and the Netherlands.

How many voices do you hear in your head, with all the different types of music you create?

Are you working on anything new currently?

I’ll be dedicating 2016 writing the new album of my band Spheric Universe Experience together with my bandmates. It’s been four years since the latest album, I’ve been releasing 3 solo records during this period, now it’s time to go back to the “band career”. I’ll write new solo material right after that.