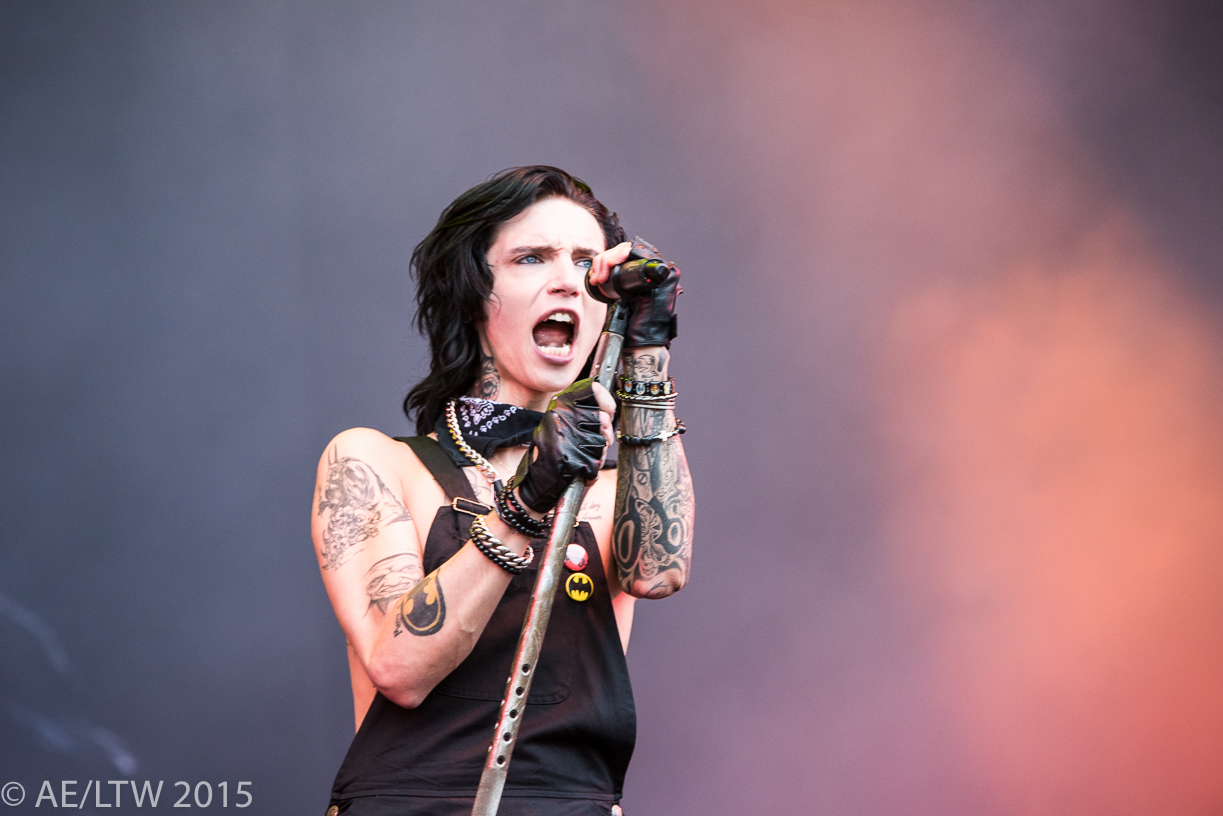 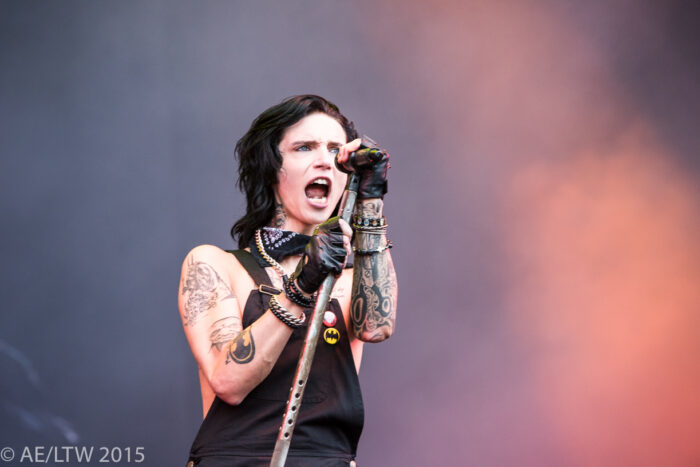 Based in Hollywood, California Black Veil brides have gained an enviable reputation for their live performances and paid a flying visit to the UK to attend the Kerrang awards and to play headline support to Marilyn Manson on Downloads Zippo Encore stage.  Louder Than War’s Alan Ewart caught up with Jake and Ashley before their show to check out what the hype is all about.

Black Veil Brides have been around since 2006 but their career really took off when they released their debut album,  We Stitch These Wounds, in 2010.  Black Veil Brides were influenced by the likes of Kiss, Alice Cooper and Marilyn Manson and like those bands their use of make-up, leather and long hair allows them to add visual impact to their stage persona.  Over the past six years or so Black Veil Brides performances have become legendary.

Despite four albums in five years and almost constant touring I must confess that Black Veil Brides had largely passed me by, something I was determined to put right at Download.

It was great to see Black Veil Brides looking relaxed backstage as they wandered around chatting to the press and having their photographs taken.  Ashley and Jake told me that were “delighted to be back at Download.  It is a fantastic festival and we really enjoy playing here.”  Well except for the weather of course. “The weather sucks” they said.

Sadly Black Veil Brides were unable to catch any of the other bands at Download. They explained that “we just flew in for the [Kerrang] awards show and the show tonight, we have to leave right after the show as we have an early flight back to  the states.”

I asked what fans could expect from tonights performance and was told “expect some fireworks.  We just won best live band at the Kerrang awards and we are going to show Download just why we won.”  The guys seemed taken aback when I asked if they had enjoyed the award show.  “Are you kidding?  We won best live band” Jake said with a laugh.

I asked what Black Veil Brides had coming up in the near future and they told me that their “Alive and Burning DVD was due out in July.”  Jake said “we are really excited about it, we played a preview to fans in a theatre and they acted just like they do at our shows, so we think fans are really going to love it.”

Black Veil Brides told me that they are still touring their eponymous fourth album and are really enjoying being on the road.  The reaction from fans has been fantastic and they are really happy with the album.  Black Veil Brides are back on the road on the Vans Warped tour which runs right through to August and pays a visit to the UK in October.

It was clear that Black Veil Brides are tight, happy in each others company and that comes across in their creative process.  “We all bring something to the process” they said.  “Sometimes we will kick off with a riff, other times it might be a vocal harmony.  There is really no set process or formula.  One of us brings an idea, sometimes it doesn’t go anywhere and never becomes a song.  other times we will build a skeleton and then embellish it to make it into a Black Veil Brides song.  It has to be something that works for the band.” 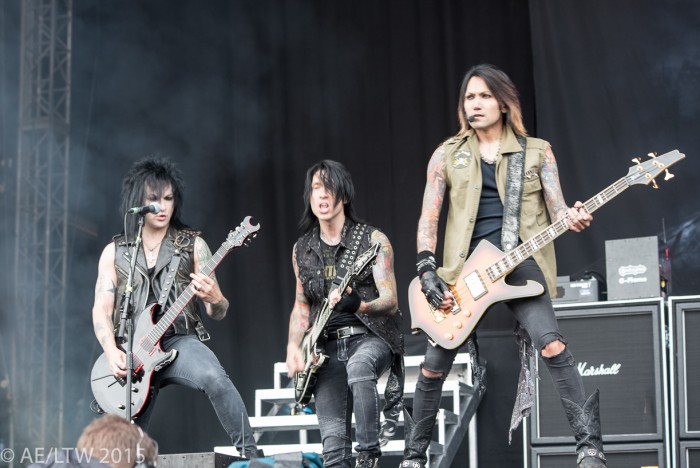 Jake and Ashley told me that everyone in the band writes music so they all add to the process, but that process is different every time.  I asked if that meant there could be solo projects at some time in the future.  They don’t rule out solo projects but emphasised that they are really happy doing what they do in Black Veil Brides.

On stage the tightness the band share is apparent from the off.  There seems to be an almost telepathic understanding between the members of the band.  They swap positions on stage, they come together and move apart in an endless energetic dance that is utterly enthralling.  Amazingly in a 45 minute set Black Veil Brides managed to play at least one song from each of their albums.  They even found time to debut “Crown Of Thorns.”

Andy Biersack is an incredible front man, he is a real Tour de Force, an energetic, enthusiastic and engaging presence throughout the set.  His piercing blue eyes seem to pick out members of the audience and he connects with them, I have no doubt that this connection is part of what makes Black Veil Brides an excellent live band.

The pyrotechnics onstage, combined with the demonic backdrop and an engaging frontman held the crowd enthralled from the opening notes of “Faithless” to the closing notes of “In The End.”  This was a terrific live performance from a band who right at the top of their game.  It is of no surprise at all that they won the Kerrang award for best live band.  It may have been the first time I have seen Black Veil Brides live, but it sure as hell won’t be the last time.

Black Veil Brides are on the internet here.  They are on Facebook and they Tweet as @blackveilbrides.

Details of the Vans Warped Tour can be found here.