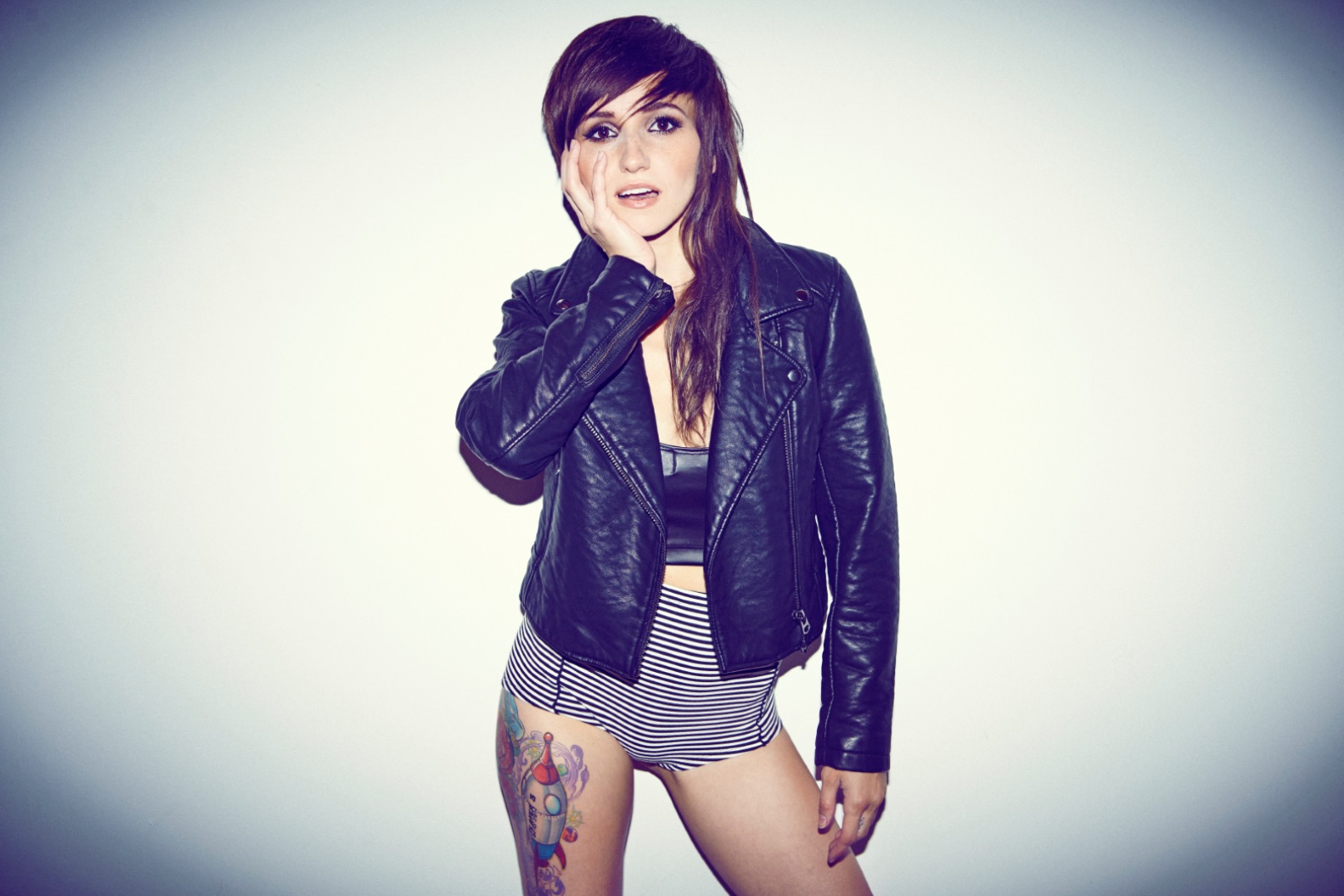 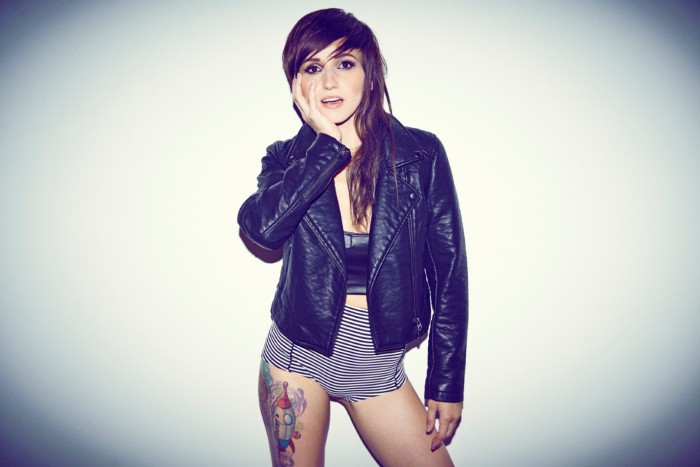 After speaking to Lights at the end of last year, Abigail Gillibrand caught up with her once again before her show at Sound Control, Manchester. They spoke of Light’s new album and the release of her latest music video, Meteorites, along with her recent trip on a cruise with Paramore.

“Seven and a half to twelve foot waves rocked the boat and it went crazy during our set. The gale force winds almost blew me off the stage!” For a girl who is petrified of the ocean, Lights braced the storm head on and faced her utmost fear of the deep as she set sail for a four day adventure on the Parahoy cruise.

A boat jammed full of endlessly talented musicians, psyched Paramore fans and a whole lot of instruments took to the open waters for a musical escapade from Miami to Mexico.

“It was crazy,” Lights exclaimed as she relived the moment. “I grew up terrified of boats and obsessed with the Titanic. Everything about the sea frightens me.” You could see in her eyes that she wasn’t lying, but the excitement that escaped from her as she spoke of the trip made it seem as though she thrived on the adrenaline and loved every minute.

It’s this relentlessness and passion that is the driving force behind Lights’ success. Since her teenage years she has never given up on her love of making music. Even when she faced a bout of writer’s block before creating her latest album Little Machines, she persevered and got through it, coming out of the other side with some of the best material she has ever produced. Now, almost two years down the line, she is in her own creative bubble and is writing almost every day.

“I’ve been writing so much. The inspiration has come from freedom of the mind and I don’t feel the pressure to do anything,” she said, sat behind a table covered in brightly coloured chocolate mini eggs. “I’m writing about things that I’ve never written about before, like anger and sex. I guess I don’t care that much about perceptions, and it’s probably one of the best places to be creatively.”

Lights spoke in a way that completely absorbed me into her world. She had an aura of positive energy making it invigorating just to be in her presence.

“When you have a kid I think you realise you have to do the things that you like and you have to remember why you like doing them. And that’s what I have rediscovered in the process of making the last record.

“Now I am learning and creating and it’s like the freest most belligerent stuff I’ve ever written. It feels so good.”

Becoming a mother is something that has inspired Lights infinitely. She has a strong independence and, as a woman, has fought for approval in the music industry. As a self-proclaimed feminist, she is determined to show her daughter that if you work hard enough, dreams can become reality.

“I think it’s very important being a woman in an industry that’s so dominated by men that you have to carve your own pathway. Especially now that I can make an impression on a young person growing up, and make sure that they’re seeing the world the way they should, where you don’t have to look a certain way or dress a certain way. I think it’s an awesome opportunity for me to show her all of this stuff.

“I would definitely identify as a feminist and I think every woman should. That doesn’t mean you have to hate men, you should just be empowered and follow your dreams and don’t let anyone stop you.”

This empowerment shows in the artwork for her up and coming album, Midnight Machines, which is set to be released on 8 April. The cover has a striking logo on it of an old school tattoo of a Panther.

“I was brainstorming a lot of symbols that I wanted to represent the album. The Panther is a tattoo design along the lines of Sailor Jerry – the way they used to be drawn. People used to get them to represent strength, grace and prowess and I thought that those are really powerful adjectives especially to describe the way I feel about myself.

“I think it’s important for people to feel that about themselves, and I think the record itself has a lot of strength and grace in it.”

Midnight Machines is almost like the counterpart to Light’s previous album Little Machines.

“It’s technically an EP of eight songs off the full record. People have been asking me about an acoustic version of Little Machines literally since the day it came out, so I feel as though this was anticipated.”

Packed full of upbeat, high impact songs, Little Machines sounds as though it has been written on a sugar high, so to picture this being flipped into something more raw and relaxed is near impossible creating an intense anticipation for the release of Midnight Machines.

“I call it Midnight Machines because it’s kind of like the drunken late night versions of the songs, when you’re just sitting there playing your instruments and it’s all atmospheric. It’s not a full acoustic album I wouldn’t describe it as that, it’s not acoustic music. It has an organic feel so it’s completely a spin side of the full version.

“I picked the songs you’d least expect to be chilled out. Songs that are vibey that you would expect to hear on the album like Portal and Speeding aren’t on there. It opens up with Up We Go, which is probably the most high energy songs on Little Machines but when you hear it this way you wouldn’t recognise it. It was a cool challenge for me to take those and turn them into something else.”

Although the majority of the songs have been taken off Little Machines, Lights has graced her fans with two new tracks.

“Head Cold was a contender for Little Machines but didn’t get on it, however I wrote Follow You Down afterwards and it’s actually one of my favourite songs I’ve ever written.”

She allowed everyone a small taste of what to expect from Midnight Machines when she released her music video to Meteorites off the album. It’s full of trippy and colourful visuals, and like Coldplay’s infamous video for The Scientist, Lights also used the reverse effect and had to learn her song backwards.

“I basically had to transcribe the song backwards and then learn those words. It was really challenging. I have all of these videos on my laptop of me practising it. It’s not only in reverse, it’s in 240 speed so 240 percent faster than the regular one it sounds insane, it’s not even language. It was crazy so much harder than I thought it was going to be.”

“The song is so organic and simple that I wanted the video to be similar, something that didn’t require a lot of tricks and wasn’t boring. So how can you make an exciting video that takes you to this other zone but is still really organic? And that’s what we did, we just shot on a beach in Toronto and it was freezing.”

After the release of Midnight Machines, Lights is leaving her electronic world behind and is taking off on an acoustic tour around four cities. With her gigs selling out fast, two new dates have been added to the list.

“It’s going to be a totally different set up. On my previous acoustic tours there’s just been me and a cellist which makes the preparation very simple, as we just get together in my apartment and go over all of the songs. But this time around all of us are playing on it because this record is the whole band stripped down plus a string quartet. So we have to rehearse with a string section which we haven’t really done before.

“When we recorded the album we worked with an arranger to figure out the parts, but we didn’t sit down and rehearse with them so that’s going to be a new experience. I’m assuming it will be a lot of rehearsal just A, learning those songs and B, learning an entire set full of songs that we can do and utilise a string section in. I’m excited about it.”

Again, following from our previous conversation, I put some questions towards Lights that were generated by her fans.

“Awh man, I’d love that… there are some amazing fans in Indonesia. One day I hope to, but there are no plans right now.”

2. Are there any songs you’ve released under the name of Lights that make you cringe? (Instagram: @damnitjessica_)

“No, I don’t think so. I have written songs that I’ve cringed at but I don’t put them out, I’ve written so many. I think that’s the important thing, you make sure that you just get past the bullshit.”

3. If you could choose three video games to play for the rest of your life which ones would you pick? (Instagram: @phaellan)

“I’d have to pick a game that would be endless entertainment. So one that constantly evolves and adds, and that would probably be World of War Craft as it is constantly updating. Because if you have to play a game for the rest of your life at least you’d be entertained.

Then I’d choose The Elder Scrolls: Skyrim. It’s a pretty big world and you can spend a lot of time levelling all of the different skills so I’d do that one.

And probably Mario Cart just because I still love that game even though it has been going for so long!”