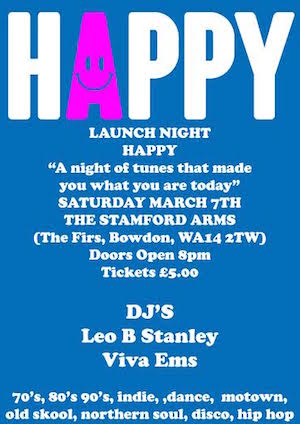 With a wealth of experience between them putting on some of the city’s most memorable dance nights we put a few questions to the trio in order to get the lowdown on March 7th’s opening night at the Stamford Arms / Bowden, as well as a look back at some of their past events and how their latest dance night came together…

Louder Than War: Hi Leo and thanks for talking to Louder Than War … you’ve just linked up with Tracey and Christopher Donnelly for the upcoming new dance nights, HAPPY, how’s it coming together?

Leo – It’s really exciting to be working with Tracey and Chris. We have known each other for many years so to officially link up is great. We are going to put a smile on people’s faces.

Leo Stanley: I don’t think you would have enough space for me to list them all! I’ve been involved in many eras of music; punk, northern soul, Motown, acid house, dance, indie – so expect to hear most of these at HAPPY.

So where do you feel Manchester’s music scene is right now in terms of dance nights … you feel the city could do with a new dance night like Happy?

Leo: It’s all for the new generation who have it all. For us mature originals there is not much! Being of that 80s crew we have had our babies, done the mortgage bit, been responsible and now we’re ready to go again … well, perhaps not as hard!

It’s for the now legendary slogan ‘…and on the 6th day God created Manchester” which you will be forever remembered, something born out a special time in the city’s musical history… what would you say is the legacy of all that, what elements of Madchester still run through the city today?

Leo: The Madchester thing wasn’t just about the music. The talent that emerged at that time also included artists, photography, fashion, film etc., it was an attitude that anything was possible. For me that is the most important legacy; whether it be music or art the younger Manchester generation now know it’s doable. Some of what you see in this  fantastic city now is a result of the Madchester days. 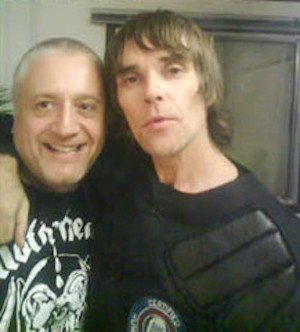 Manchester has sort of gone through its nostalgia era over the past couple of years, kicking off with the return of the Stone Roses bringing a whole new generation to that era we know as ‘Madchester’ … what are your thoughts on it all?

Leo: Like you, I suppose we never really knew what we were creating at the time, just goes to show!

Manchester has always been a  creative hub with a great musical heritage, it’s nice to think that some of the young bands & great new music being made today has been inspired by that era.

Is ‘Identity clothing’ still a big part of your work? What would you say have been some of the most popular printed T-shirts you’ve ever produced?

Without doubt the 6th Day T-shirt. Amazingly it still sells to this day with most going to LA !! [there must be many Mancs there!]

The HAPPY nights will be staged at The Stamford Arms, Bowdon, Manchester … when is the first event going down?

Leo: The whole vibe of the night is to just “come along and have a good time.” No VIP sections, no pretentiousness, it’s have a drink, a chat and a dance. We are going to be doing the night monthly and will be starting other HAPPY nights in different areas.

The lovely Viva Ems is DJ’ing at the launch night too, she’s got  a great set lined up.

Between the both of you you’ve been involved in many of Manchester’s legendary dance nights … from the city’s first illegal acid house party ‘Sweat it Out’ in 88 to the Your-Own: dance nights which you put on at Amnesia / Ibiza every summer… What are some of your own favourite dance nights from down the years, and why?

Tracey Donnelly: One of my favourites was at Kendal Calling a couple of years ago in Dave Haslam’s tent, every track he played was a winner. I kept hoping he would play a track that I didn’t like as I was dancing in a foot of mud in wellies, so in fact I wasn’t dancing I was rocking backwards and forwards. I felt like I’d had a major work out the next day.

Cream Amnesia a few years back. My daughter Paris was working the season in Ibiza and we were all going out together that night. She asked if she could bring a couple of friends, but turned up with what seemed like every worker on the Island. Poor Chris had empty pockets sorting all the workers out. We got the Amnesia coach back home which was first with our friend Oli throwing stuff at a sleeping Chris.

Christopher Donnelly: Without question the ones I’ve been involved in, it’s a different kind of buzz seeing everyone having a good time. My 21st birthday, Sweat It Out, Joy and the Ibiza nights.

Tracey & Chris: One of the funniest dance stories was when the two of us were working on the Chase & Status ‘Blind Faith’ video which recreated Chris’s 21st party. Without any warning Daniel the director ushered us into a room where the main cast were stood around, he then asked if we wouldn’t mind showing the actors how people danced in ’88. All eyes on us, no music, when we did finally start moving they were replicating every move … very awkward, very funny

What is it that’s inspired you both to start the HAPPY dance nights then, and what’s the door policy?

Tracey: There are some fantastic night clubs and nights in Manchester, but as you get older it’s like organising a military campaign trying to get all your mates together to get into town! We were looking  for something local with good music and a great atmosphere… so after talking about it for over a year we have bit the bullet and we’re doing it. We’ve had parties at The Stamford Arms before, so we know it will work well, it’s friendly and in a great location.

You must both have many favourite dance records from down the years to choose from, can you give me a few of them and will they be getting spun at HAPPY?

Tracey: The great thing about HAPPY is it will be different genres of music. I will choose some tracks that Leo and Emma (if I ask them nicely) may play for me; Scotty & Lorna Bennett ‘Skank in Bed’, Change’s ‘Glow of Love’, Marvin Gaye’s ‘Got to Give It Up’, Layo & Bushwacker’s ‘Love Story vs Finally’ … stop me now, I could go on and on…

Chris: A few of my favourites would be Mr Fingers ‘Can You Feel It’, Dianna Brown & Barrie K Sharp’s ‘Masterplan’, Frankie Valli’s ‘The Night’ … you never know, I may even have a go at DJ’ing at one of the HAPPY nights!

As well as the HAPPY dance nights you’re both still involved in the fashion industry with the Your-Own: label … is Your-Own: inspired by music culture like Gio Goi was?

Everything we have ever done fashion wise has been inspired by music, for us the two go hand in hand.

The launch night is on Saturday 7th March 2015. Doors open at 8pm and stay so till 1am, so if you’re coming get there early!

You can also buy them via HAPPY’s facebook page and from The Stamford Arms.